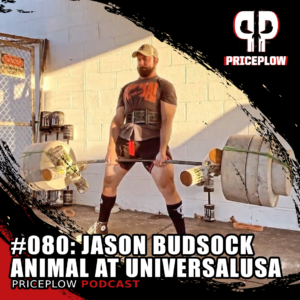 Unofficial holder of the “World record cement deadlift”, it’s Jason Budsock, VP of Products at Animal / UniversalUSA, who joins us for Episode #080 of the Podcast!

In early January of 2023, we kicked the year off right by hosting Jason Budsock of Animal at Universal Nutrition on the PricePlow Podcast. Many know Jason for his two decades at Animal – He’s JDawgXL in the forums and on Instagram, and is the Vice President of Products at the company.

In this discussion, we talk about Animal’s legendary past, the incredible product launches over the past year (see them on our Universal Nutrition news page), and what they have coming for us in 2023.

We reminisce about The Cage, and Jason explains how they were the original EAA supplement, released in the early 2000s after following two studies published in 1999 and 2000.

Some changes are coming to Animal Pak, a new value Whey Protein is on its way, and far more.

That ended the conversation, and it was great catching up Jason!

Stay in touch with Universal Nutrition and Animal:

And don’t forget to sign up for PricePlow’s Universal Nutrition news alerts!