Posted on August 31, 2022 by Mike Roberto and Nick Andrews | No Comments

Universal Nutrition, the owner of the Animal supplement brand, has been all the way around the block of the bodybuilding scene. Since the creation of Animal Pak, they’ve been a major force in sports supplements for decades and were there turning out awesome products throughout the fabled golden age of bodybuilding. Universal mastered the basics long before most of today’s players were even in the game – we’re talking mainstay supplements like creatine monohydrate, arginine, and liver tablets. 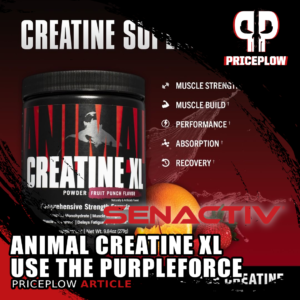 So it’s fitting, in a way, that Universal is the company to reinvent creatine.

That’s what’s going on in Animal Creatine XL – the basic idea behind creatine, which is to support athletic performance through ergogenic effects, is being taken to a kind of “logical conclusion” with ingredients that complement and enhance the original effect.

Each scoop comes with the classic 5 gram dose of creatine monohydrate along with 2.5 grams of betaine, but with two supporting ingredients, NuLiv Science’s Senactiv and a purple tea extract known as PurpleForce. As we’ll learn, this is no ordinary creatine supplement!

Creatine XL came out alongside the amazing Animal Creatine Chews, but sometimes you want even more material, or don’t want added sugar, and that requires a powdered formula to mix into water.

Let’s check prices and availability, post up our video explaining the benefits, and then get into the deep-dive below:

We’ve included a Table of Contents in case you already know plenty about creatine (which comes first) and want to skip down to the novel parts of the label.

In a single 1-heaping-scoop (9.3 g) serving of Animal Creatine XL Powder, you get the following: 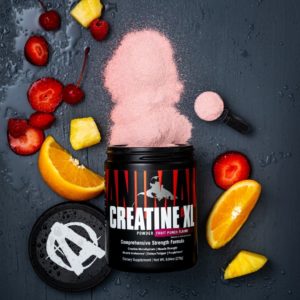 Creatine XL has no added sugars or carbs, instead relying on natural flavors and sucralose as a sweetener:

Conclusion: Use the PurpleForce with Animal Creatine XL

Animal Creatine XL is a much-needed update on the classic creatine idea. We’ve seen creatine monohydrate combined with betaine before, and we’ve even seen a couple creatine formulas add Senactiv, but with the addition of PurpleForce, we can gladly say that this is a next generation creatine supplement.

The biggest question is if you want to take this, or take the delicious Pez-candy-like Animal Creatine Chews. Overall, this is going to be a more efficacious formula, given higher doses and more ingredients… but those Chews really are good, so consider also grabbing a few when you need some fun creatine on the go. 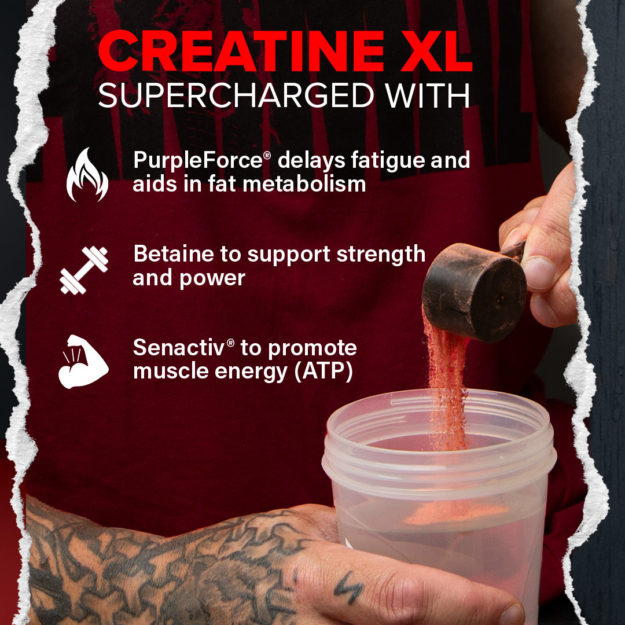