The supplement industry has long suffered from an innovation drought. While formulations get better, there are only so many ways to make a dish from the same ingredients. Senactiv, a powerhouse ingredient from NuLiv Science that was formerly known as ActiGin, promises to shake up and innovate the ergogenic foundations of the industry — but does it deliver? And if so, how?

Senolytics: The Background Behind Senactiv 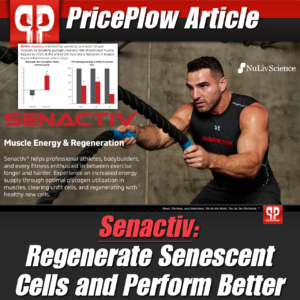 Out with the old, in with the new. Regenerate senescent cells and improve performance with NuLiv Science’s Senactiv

Understanding this new ingredient requires a dive into semantics. Senactiv falls into the broad category of senolytics. Senolytic compounds work by inducing cellular death. While cellular death sounds scary, it can be beneficial – so long as it’s operating on the correct cells. The human body contains many senescent cells, which are elderly cells that are deteriorating. Senolytics promote health by speeding up the breakdown of older cells while also encouraging the growth of new cells. Senactiv is a senolytic that functions at the level of the endothelial lining of skeletal muscle.

Before we get into the clinical data, it’s worth discussing where Senactiv comes from. The compound itself is a proprietary blend of Panax notoginseng and Rosa roxburghii, developed by NuLiv Science. Keen-eyed readers of PricePlow might recognize NuLiv as the geniuses behind AstraGin — one of the most popular bioavailability-improving ingredients in the industry. NuLiv empowers this blend of Panax notoginseng and Rosa roxburghii through a unique extraction and processing technology that allows for a higher purification and fractional extraction than that of the competition.

NuLivScience is a global research company with several patented ingredients including AstraGin, InnoSlim, and Senactiv.

To summarize, Senactiv is a unique blend of Panax notoginseng and Rosa roxburghii that helps replace older endothelial cells with newer cells – and when used in pre workout supplements, amino acids, and proteins, it accomplishes extremely encouraging results.

The science of Senactiv

The first trial took healthy young men that received either a five milligram capsule of Senactiv‘s ginseng extract or a placebo one hour before exercise. The researchers conducted muscle biopsies prior to, immediately after, and three hours after a 60 minute cycle exercise. The muVscle tissue exposed to the ginseng appeared to have enhanced glycogen replenishment and fewer markers of inflammation when compared to the placebo group. 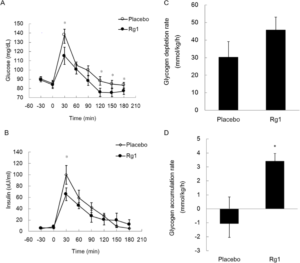 Coming from just the ginseng side of the equation, the improved glycogen depletion and accumulation rates may have benefits for dieters as well as high-performing athletes![1]

While this may sound like word salad, the take-home message is that ginseng present in Senactiv helps reduce the proinflammatory state that exercise causes. Besides this anti-inflammatory benefit, the ginseng also appears to have improved VO2 max by 20% versus the control group![1] While it’s important to note that overall aerobic capacity did not improve, we will take a VO2 max boost any time!

The muscle biopsies taken during the first two trials allow us to define the mechanisms at play. The muscle tissue exposed to the ginseng extract had 47% more citrate synthase.[1] Citrate is one of the first stops on the way for a cell to make ATP. So this increase in citrate may cause the bump in VO2 max noted during the cycling event. The treatment group muscle tissue also showed significantly fewer markers of lipid peroxidation, free radical damage, inflammation, and muscle damage compared to the placebo group.[1-4]

One of the most important factors in recovering from exercise is sequestering glycogen back into muscle tissue. Senactiv appears to improve the rate of glycogen storage after exercise. The muscle biopsies taken 3 hours after exercise showed 2.7 times more glycogen accumulation compared to the control group.[1] Senactiv’s ability to attenuate structural damage is likely behind this increase.[1,2] 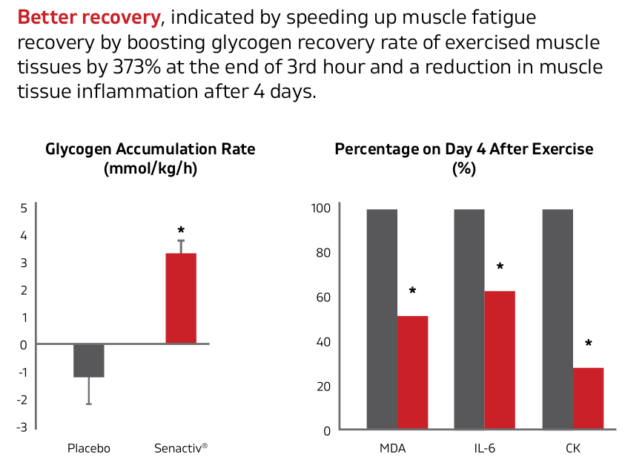 Hard-training carb-lovers rejoice: The ginseng in Senactiv gets glycogen restored better and faster,[1] so you can reload and get after it sooner.

Out With the old, in with the new: Senolytic Benefits

Beyond its ability to boost cellular integrity and muscular glycogen accumulation, Senactiv appears to be a potent senolytic. As noted before, senolytics are compounds that help clear out old cells. 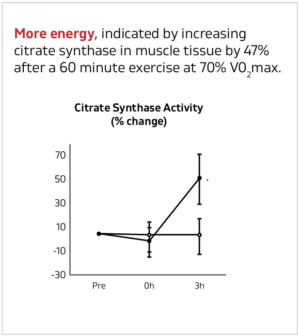 To measure this, we need a way of detecting old cells on a tissue sample. β-galactosidase is one of the most reliable and easy to detect signs of cellular age.[5,6] Muscle samples taken before and after exercise shows that Senactiv supplementation resulted in significantly fewer amounts of detectable β-galactosidase-tagged cells. Less β-galactosidase means less old cells, which is senolysis at work![2]

All told, Senactiv presents incredible benefits to a multitude of athletes — from endurance to bodybuilders — as well as those interested in anti-aging and longevity.

Practical: How Much Should We Take? Is it Safe? Who Should Take it?

With the nitty-gritty out of the way, we’ll discuss how to use Senactiv!

Right now, NuLiv suggests taking a 50 milligram dose to get started, and this is often an “experiential” supplement that can be felt. According to NuLiv, pro athletes and boxers are experimenting with higher doses with outstanding success. Liquid delivery systems appear superior to capsules, but time will tell where the industry takes this unique supplemental gem.

In terms of safety, Senactiv received the coveted US GRAS/NDI self-affirmation in 2015.[9] This certification was based on a 28-day, repeated oral-dose toxicology report in rats. The doses went to 600 milligrams per kilogram of body weight for 24 hours, which is far more than NuLiv is recommending. Since you can feel Senactiv in a dose as low as 50 milligrams a day, the safety profile appears to check out, since you don’t need to come anywhere near the tested doses.

In addition, Senactive is an “Informed Ingredient” as certified by Informed Choice, which means that it is regularly tested and known to be free of banned substances.[10] This allows those of us who compete in drug-tested athletes to have nothing to fear when using it. 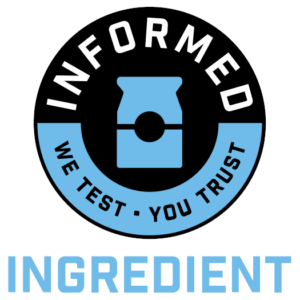 Senactiv is an Informed Ingredient (formerly known as “Informed Choice / Informed for Sport”), meaning it’s tested and shown to be free of banned substances.

The PricePlow team has taken a liking to Senactiv, especially at the higher doses. Whether it’s more endurance in an intense lifting session, easier weight loss, or even just an easier time getting over the midday hump – we do notice a difference on days you take Senactiv. It feels “cleaner and clearer”, if that makes any sense. NuLiv is definitely onto something here.

The great thing about Senactiv is that anyone can reap the benefits. Even if your diet or recovery aren’t perfect, Senactiv can act in the background to help clean up the mess a bit. To this extent, we would love to see this ingredient integrated into more general health supplements and not just energetic pre workouts (although we of course love it there too). It could be a fantastic boon to any multivitamin, longevity, or preventative health products out there.

Where can I Find Senactiv? 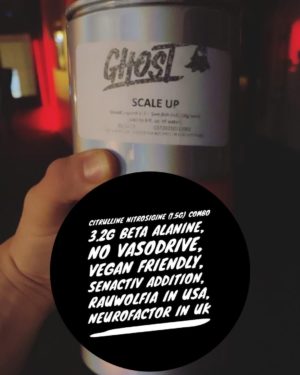 The ingredient list of Ghost Legend V2 leaked in early 2021, and the addition of Senactiv will be one of the “best felt” changes to the formula!

PricePlow fans will be relieved to find that many house-favorite brands are using Senactiv, and the lineup will certainly grow. This includes Ghost, a brand that has truly risen to a top-tier position in our rankings, and is consistently upgrading and testing improved formulas with ingredients such as this one. To try it in the higher doses where it really starts to shine, Like a Pro Supplements Glycotrix (intra workout supplement) has 50mg Senactiv, and Ghost Legend V2 will also have a strong dose.

Another popular pre-workout, Woke AF by DAS Labs (the company behind “Bucked Up”), features both AstraGin and Senactiv (25mg each), which could be an excellent way to feel how dominant NuLiv’s ingredients have become!

You can also find some earlier supplements containing ActiGin, Senactiv’s former name, although those will be transitioning from the market through 2021. One such example is EndurElite’s PerformElite X, a monstrously-dosed endurance-minded pre workout supplement.

Expect to see a lot more Senactiv in the coming years. You’ll understand when you try it at a higher dose!

If you’re an endurance athlete itching to boost your energy and VO2 max, or even just an aging weekend warrior trying to boost your health game, we think giving Senactiv a shot is worth it. NuLiv Science’s AstraGin is nearly everywhere, and we’re starting to think that Senactiv should be as well. If they did it once with an ingredient to amplify other ingredients, they certainly can do it again with a way to amplify your cells’ recovery.