CORE Hydrate: A New Bar is Set for Electrolyte Supplements

Posted on September 17, 2022 by Mike Roberto and Nick Andrews | No Comments

Professional bodybuilder Doug Miller started CORE Nutritionals in 2005 when he realized that the market’s meal replacement proteins were quite simply unacceptable. His response was the introductory release of Core MRP, marking the beginning of a juggernaut operation.

17 years later, Doug and CORE are still going strong, and the same issue has reared its ugly face — this time, in a different product category: hydration supplements.

CORE Hydrate is here, and it’s a serious electrolyte supplement, with massive doses of potassium, sodium, and chloride… and so much more in one little stick pack! Inside, we call this “The Doug Miller of Electrolytes” because it goes way above and beyond what’s normal

Frustrated by low-dosed, poorly-ratioed, or incompletely-developed hydration supplements, the team’s at it again with yet another impressive formulation:

The new Core HYDRATE formula is a serious electrolyte-based hydration supplement that hits a ton of notes we look for in a top-tier formula. It’s heavy on minerals, has a big emphasis on oft-neglected potassium, introduces a few novel forms of electrolytes, and includes several additional active ingredients like taurine and Senactiv.

The Doug Miller of Hydration Supplements

For extreme athletes — or outdoor workers who deal with a lot of heat — this is how you re-hydrate. One look at the formula and many of our readers will realize that this is what they’ve been searching for. As for the rest of you, we have a very in-depth explanation of why it’s all so important, especially in our modern dietary environment.

Ladies and gentlemen, prepare to meet the Doug Miller of hydration supplements. Because when everyone else is doing 10 reps, Doug is doing 20… and this formula brings that exact same attitude.

In a single 1-stick serving (7.9 grams) of Core Nutritionals Hydrate, you get a ton. We’re going to start with the essential minerals, which are listed in the upper half of the label. Of note are the huge doses of sodium and potassium provided here, far exceeding the vast majority (if not all) of electrolyte supplements on the market: 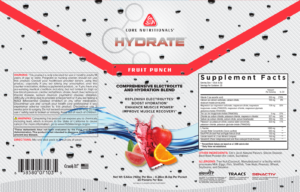 Now that is what we call an athlete’s electrolyte supplement. You simply don’t often see doses of sodium and potassium that are this high, and when you do, they don’t taste this good. We’ll say it again, Doug Miller and his crew at CORE Nutritionals absolutely crushed it with this formulation.

Anyone can throw a ton of sodium and some taurine into a bucket. But to make it with this much potassium and keep the flavoring excellent is another story. This one took time and attention (we actually tasted it in our February 2022 trip to CORE’s headquarters), and it shows in the results.

When it comes to hydration supplements, a new bar has been set. And unlike some of the competition, this one actually has calcium, zinc, chloride, and magnesium… yet doesn’t rely on a bag of sugar to flavor and sweeten it. The hydration world has been put on watch.