In the past decade, the supplement industry has witnessed an ingredient design revolution, with a veritable explosion of designer compounds patented and released by innovative nutraceutical labs.

Methodically, old generic ingredients are being displaced by new designer versions, many of which have plenty of peer-reviewed research demonstrating their superiority. 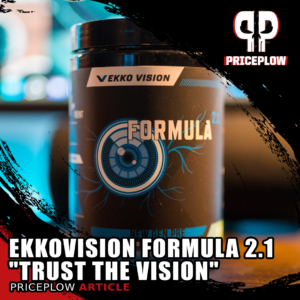 Ekkovision Formula 2.1 is a pre-workout supplement with seven trademarked ingredients, one of them being the patented Nitrosigine for pumps!

However, this revolution is proceeding slowly. Despite the superior efficacy and bioavailability of most designer ingredients, many supplement manufacturers are still clinging to antiquated generic forms.

We would like to see this process move faster – which is why we’re so excited about Formula 2.1 Preworkout from EKKOVISION.

Loaded with more than seven different research-backed patented ingredients, led by a full dosage of nitric oxide boosting Nitrosigine, this formula really goes for the gold in terms of innovation. Formula 2.1 Preworkout promises to deliver to consumers unprecedented value in supplement bioavailability and efficacy.

So does it? Read on to find out! But first, let’s check the PricePlow deals: 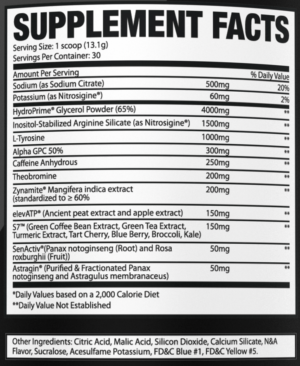 In a single, 1-scoop (12.3 gram) serving of Formula 2.1 Preworkout from EKKOVISION, you get the following:

Formula 2.1 from EKKOVISION is a seriously awesome formula, consisting of powerful ingredients at substantial doses. Dosing is something EKKOVISION seems to take very seriously, which we definitely like to see. Even sodium, the cheapest and most generic ingredient in the formula, is dosed appropriately, which is rare.

Most supplement manufacturers dramatically under-dose sodium, to the point where it may as well not be included in the formula at all, but EKKOVISION apparently knows better. We appreciate this design philosophy, and are excited to see more products from them in the future.