NutraBio brings in the MOAB (mother of all bombs) of an intra-workout supplement: LEG DAY! 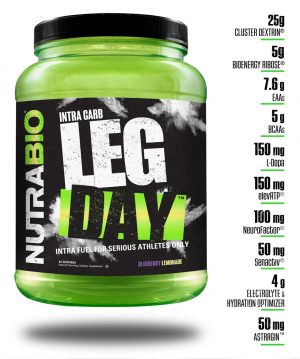 Are you looking for a supplement that can actually match your epic training sessions? Then you’ve met your match with NutraBio’s Leg Day.

On February 17, 2021, NutraBio CEO Mark Glazier teased an image of a “LEG DAY” tub on his personal instagram.[1] After posting the label, LEG DAY was released just 10 days later, and it’s available for sale right now!

The long story short is that this is the intra workout supplement that you take during your most insane workouts. It has literally everything you could ever want in terms of amino acids, endurance boosters, strength and performance enhancement, hydration, and more. NutraBio has brought out some incredible patented ingredients that they’ve never used before, and it’s all anchored with some high-quality carbs to keep you going.

If you’ve ever had a 2+ hour training session that left you horizontally glued to the floor once it was over, then Leg Day is the supplement for you.

We’re going to jump into the ingredients of this monster, but before we do, sign up for our NutraBio News and deal alerts and see the PricePlow-powered coupons below:

NutraBio LEG DAY is to be taken intra-workout — meaning during your workout, but you can prepare for that leg-day-style workout beforehand and get those carbs in a bit quicker. Now, let’s take a look at all the ingredients included in the powerhouse known as NutraBio Leg Day!

Now that’s an ingredient label if we’ve ever seen one!!

NutraBio launched Leg Day in two flavors, but the list below will remain up to date in case they release any additional ones:

NutraBio stunned us with this one, and quite honestly, we weren’t ready for such a monster supplement.

When explaining Leg Day to a friend, the best way to describe it was to say that “This is the supplement you take for those three hour Saturday gym sessions where you ‘lose’ your phone and your girlfriend seriously re-evaluates your relationship because this is all you do all weekend.”

For a while, Mark Glazier had been talking about blowing the lid off of a workout supplement. He finally did it, and he did it in breakneck speed from start to finish. And he and his team knocked it out of the park.

Make every day leg day. Turn up the speakers and get to work. You can always “find” your phone later.