Ghost’s “Year of the V2” is still underway, with 2021 bringing several upgraded formulas to the family including a more powerful Ghost Legend and Ghost Pump. But what about the brand’s flagship muscle builder? Ghost SIZE V2 is next: 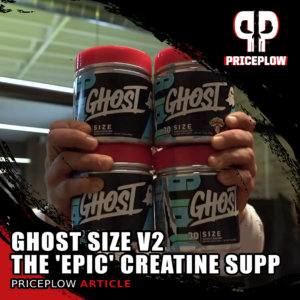 The ‘epic’ creatine supplement has been upgraded in Ghost Size V2! Learn about it in insane detail here on PricePlow

Being truly groundbreaking in the creatine / natural muscle-building supplement space isn’t the easiest feat to accomplish. Simple creatine monohydrate is the most well-studied and successful form of creatine, so it takes far more to get excited. However, if there’s one thing Ghost is great at, it’s generating excitement.

Ghost SIZE is a novel spin on the traditional creatine supplement that furthers the ergogenic benefits of the delicious-tasting Legend Pre Workout. It provides clinical dosages of several muscle-building and performance-enhancing ingredients including creatine, betaine, beta alanine (tingle-reduced!), and more.

Size can be used any time of the day — before, during, or after workout, but we argue pre workout if you have a choice. Consider it a once-daily multivitamin for your muscle gains – get it in every day!

This article goes deep into the science behind Ghost Size V2, the differences from the original version, and the flavors available. Before we get to that, check our coupon-based deals and sign up for Ghost news alerts from PricePlow:

If you’re familiar with Ghost, you know they’re anything but ordinary. For Size, they shoot for 5g yield of creatine in their rather innovative natty muscle builder. But, there’s plenty more to Size than just creatine… and they’re of course bringing some insane flavor:

In 2017, Dan had a few other tidbits about Ghost Size and specifically in regards to the brand’s pre workout, Legend, that we felt would behoove our readers to see:

“Last, unlike our pre-workout where we recommend 1-2 scoops to give users easy flexibility to flavor their stimulant and other doses, GHOST Size is a 1 scoop, fully clinical, packed to the nines, no cost spared muscle builder. It’s launching in a neutral, natural flavor and contains no artificial sweeteners or colors. Get ready to make some gains, Legends!” 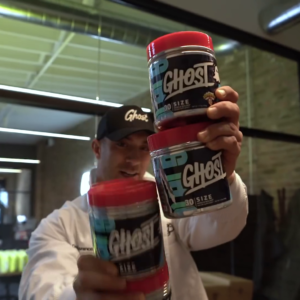 Ghost Size V2 launched with four flavors, but the most interesting one may be “Natty”, since it can be stacked with Legend, Pump, Gamer, or any other flavored supplement!

If you happened to catch our Ghost Size unveiling video on YouTube, you saw that they’re launching in four flavors, including a neutral (“Natty”) one that can (should be!) stacked with Ghost Legend:

To see that unveiling, see Season 7, Episode 16 of Ghost’s Building the Brand YouTube Series in Season 7, titled “The HQ Showdown”:

Ghost Size V2 is a Legendary Upgrade to Creatine 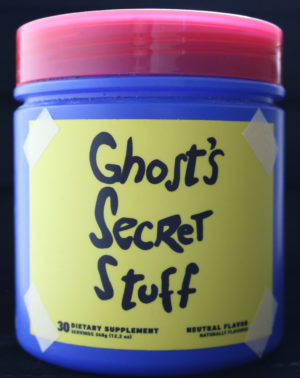 Throwback: When Size v1 was about to launch, Ghost sent out beta tubs in these epic Ghost’s Secret Stuff tubs.

Leave it to Ghost to go and completely one-up the traditional creatine supplement. We originally expected as much, given their beta-test release that was sent as “Ghost’s Secret Stuff“, with our tub pictured to the right.

Make no mistake – Ghost is “mainstream” and extraordinarily popular, selling a ton both online and in retail. They’re catchy, flashy, and the cool kids in the space. But inside the tub, they’re just as innovative as ever. We love how they’re pushing ingredients like epicatechin and Senactiv to the masses, and tingle-reduced beta alanine is a unique novelty many will love.

While Size can be used any time of the day, we believe there are enough benefits to take it pre workout, especially with what betaine can bring to the table at that time. But all in all, it doesn’t matter when you take it, so long as you get your basics in each and every day, and train and eat for Size.