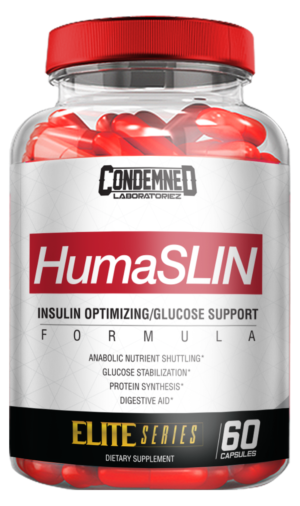 Condemned Labs HumaSLIN is a comprehensive glucose disposal agent (GDA) for those who love their carbs but don’t process them extremely effectively.

Many of us walking around struggle with the desire to eat lots of carbs but then have to deal with the unpleasant bloat and fat gain that comes with enjoying them. Some opt for low carb, keto-style diets, while others tread lightly and only eat carbs during their “anabolic window.”

But what if you can have your cake and eat it too?

Thanks to developments in the research field though, those who crave their carbs don’t have to be as carb-conscious as they once were thanks to insulin mimetics and glucose disposal agents. These products enhance nutrient shuttling, protein synthesis, blood sugar regulation and glycogen replenishment, and we’ve come across a new one on our radar courtesy of Condemned Labz.

Everyone lost their minds when we posted about Condemned Labz’ CONVICT STIM pre workout, so can they do for carbs what they did for stimulant-based pre workouts?

HumaSLIN is a fully-loaded GDA designed to maximize the body’s insulin response for superior glucose processing and storage.

All of the info is just ahead, but before we get there, take a moment to check the best deal and sign up for alerts from PricePlow:

HumaSLIN was formulated using several of the most proven agents around to reap the benefits of the ultimate anabolic hormone (insulin), making for better nutrient shuttling, glycogen replenishment, and muscle growth.

Take this with carbs!!

Note: Doses listed below are based on 1 full serving (i.e. 2 capsules). 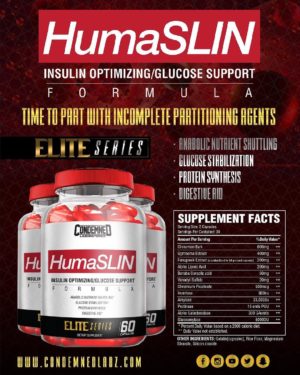 Stop fearing carbs and start putting them to use with HumaSlin.

Consume 2 capsules with a meal containing at least 50g of carbohydrates.

Don’t condemn yourself to a lifelong fear of carbs! Now they fear you!

We’ve said it before and we’ll say it again, carbs aren’t the enemy for athletes — they’re incredibly valuable for performance, and they’re really tasty. If you’re not a genetic elite who processes and stores carbs like a champ, that doesn’t mean you have to avoid carbs altogether, you just have to be smart with your supplementation and consider a quality GDA like HumaSlin.