Built from the ground up!

RAW Nutrition launched in July 2020 with six products, all designed to optimize sports performance. This one takes that to a whole new level:

To kick-start the year, RAW Nutrition is releasing a new pre-workout, simply called RAW PRE. Similar to other RAW supplements, RAW PRE has a fully transparent label, which means the company lists the exact amount of each ingredient on the product label. RAW PRE is also made with efficacious doses of ingredients scientifically proven to boost energy, pumps, focus, and performance, such as: 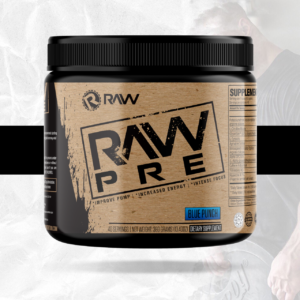 RAW PRE may be low on the stimulants, but it delivers intense focus, pumps, and performance!

One of the most interesting things about RAW PRE is that, compared to other pre-workouts, it’s fairly low on stimulants. Two scoops only contain 100 milligrams of caffeine, whereas it’s common to see anywhere from 250 to 350 milligrams in other pre-workouts. However, RAW PRE contains another ingredient that, in combination with other natural stims, can really get you going.

Keep reading to learn more about RAW PRE and sign up for PricePlow’s RAW Nutrition news and deal alerts below!

If you’re new to stimulants, RAW Nutrition recommends consuming just one scoop of RAW PRE with 6 to 8 ounces of cold water 20 to 30 minutes prior to training. Following that, users have the option to increase their serving size to one and a half or two scoops. For this ingredient analysis, we discuss the full two-scoop serving size.

Here’s what one serving (19 grams) of RAW PRE contains:

Here’s an updated list of all available RAW PRE flavors:

RAW Nutrition is among one of the few brands that are certified Banned Substances Control Group, or BSCG. This means their products are tested by a third-party laboratory to ensure they’re free of banned substances. It was impressive to see what RAW Nutrition accomplished in such a short amount of time, and now they’re working to make 2021 even more successful. Learn more about RAW Nutrition and Revive MD’s partnership with BSCG.

This is an excellent follow-up to our previously-covered RAW Nutrition supplements that also optimize performance: 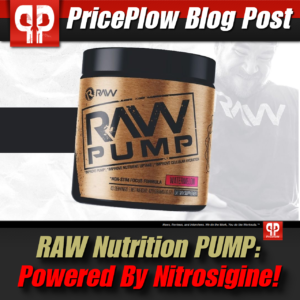 Stack with RAW Pump and get ready for insanity!

In addition, after the initial release of these supplements, RAW Nutrition continued expanding its product line throughout the year by dropping:

It’s quite rare to see a sports nutrition brand launch six comprehensive supplements at once, attain their BSCG-certification, and sponsor several professional athletes in less than a year. Arguably, it’s even rarer for a supplement company to launch without a stimulant-based pre-workout product. RAW Nutrition obviously isn’t here to follow the status quo. Don’t expect this company to do what everyone else is doing — now or in the future.

RAW Nutrition proves that you don’t necessarily need a high-stimulant pre-workout to make a significant impact on the industry. Instead, Matt Jansen and Dr. Domenic Iacovone created supplements that best suits everyone’s needs, including their clients, athletes, followers, and their own.

“We really wanted to make a brand that focused on the individual raw ingredients and not cut corners when it came to the amounts of the most beneficial ingredients from a performance perspective. Our slogan is from the ground up, which simply means taking the most researched ingredients at the doses that are shown to induce the most amount of positive benefit for that ingredient within its individual category and turning them into the best overall products.”

Although RAW PRE does contain stimulants, it’s one of the gentlest on the market. But that doesn’t mean it’s not extremely effective. Pre-workouts are more than just an energy drink or powder and RAW PRE is a prime example of that. It’s refreshing to see a brand that continues to do things differently from a formulation standpoint. RAW Nutrition had a phenomenal first year, but we’re excited to see what’s in store for the rest of 2021.

Sign up for RAW Nutrition news and deal alerts to get notifications when new products, flavors, and sales are available!