A new study is out from the University of Arkansas showing that Nitrosigine works as well as citrulline malate (2:1)… at a dose 5x smaller!

Nutrition21’s nitric oxide boosting ingredient, Nitrosigine, was quietly put to the test against a hefty dose of 2:1 citrulline malate at the University of Arkansas. When stunning results were published, some were surprised, but users of the branded enhanced arginine ingredient weren’t.

Nutrition21 is one of the supplement industry’s leading ingredient developers, utilizing volumes of knowledge from the world of pharmaceuticals and biotechnology to produce some of the best nutritional ingredients on the market. If you’ve been keeping up with us here at PricePlow, you’ve likely heard of their ingredients before, with Velositol and nooLVL alongside the well-known Chromax.

Perhaps their most popular ingredient is NitrosigineⓇ, an extremely powerful vasodilating pump ingredient that was introduced to the market in 2013.[1] It’s used in various products, and athletes have been incredibly pleased with its results. New clinical research is still being released, providing additional insight into the powers of NitrosigineⓇ – but this one’s a bit different because Nutrition21 had no clue the study was underway!

Nutrition21 had no involvement in the study, which adds an extra layer of interest to readers.

The newest publication from the University of Arkansas has unveiled some intriguing data, finding that a 1.5g dose of NitrosigineⓇ was same as 5x as much citrulline malate (8g of 2:1 CM), another leading nitric oxide-boosting ingredient. The results of this study reinforce and validate Nutrition21’s increasing success in this arena.

In this post, we’ll to dive into the new research and give a brief overview of what NitrosigineⓇ is. Before we get into that, be sure you’re subscribed to PricePlow’s Nutrition21 alerts so we can help you get some great supplement deals, news, reviews, and interviews!

The new research – 1.5g of NitrosigineⓇ as effective as 8g of 2:1 citrulline malate!

At the 2019 International Society of Sports Nutrition (ISSN) Annual Conference, independent researchers from the University of Arkansas presented some very exciting research. In their study, “The Acute Effects of Citrulline Malate and Bonded Arginine Silicate Supplementation on Vasodilation of Young Adults”,[2] 22 moderately active subjects (14 men, 8 women) were split into three crossover groups – each received 1.5g of NitrosigineⓇ, 8g of 2:1 citrulline malate (eg 5.333g L-citrulline), or placebo.

Prior to administration, researchers collected an initial FMD measurement (flow-mediated dilation) for each subject to assess their blood flow. 60 minutes after receiving the single dosage, another round of FMD tests were given.

This was repeated two more times so that each participant could get each ingredient (with seven days in between to “wash out”). The supplementation order was randomized and double-blinded for each subject.

With these metrics in hand, the researchers came across some interesting findings:

A “stealth” study: Nutrition21 out of the loop

While we typically see research for formulated ingredients funded by the company that manufactures them, it’s important to note that Nutrition21 had no idea this study was being conducted![3] They simply arrived at the 2019 ISSN Conference as usual, and were pleasantly surprised with new research that elevated the reputation of one of their flagship products. With NitrosigineⓇ showing to be 5 times as “space efficient” as citrulline malate, they surely left the ISSN Conference more satisfied than they had anticipated!

It’s always great to see research that’s not funded – we’ve long believed that Nitrosigine is certainly the real deal, and now it can be used in lieu of 8g powder that takes up precious space in each scoop. Or, as most of our readers would wonder – what happens when we use both? We know that Nitrosigine elevates NO levels for quite a long time, and while we don’t think using both will double NO, we do hypothesis that there could be some form of a cumulative effect.

Watch Ben Gives His Thoughts on The Study!

If you’re new to the ingredient, let’s discuss what it is: 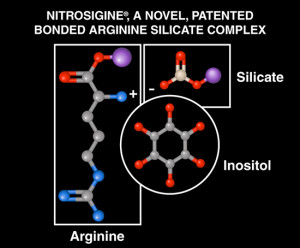 NitrosigineⓇ is a patented ingredient composed of ionically-bonded arginine, inositol, and potassium silicate that can have some powerful effects on circulation and blood flow. Now, you may be aware of the research regarding standard L-arginine, which essentially shows that it isn’t the great pump-inducer it was theorized to be due to its poor bioavailability. However, NitrosigineⓇ is not just arginine! The inclusion of inositol and silicate improve the bioavailability,[4] so much so that this ingredient is arguably at the top of the supplement mountain when it comes to pumps. The long story short is that Nitrosigine is what we always wanted L-arginine to be when it was popular in pre workout supplements in the 2000s.

Mainly, NitrosigineⓇ gets the job done by raising nitric oxide (NO) production, which in turn vasodilates blood vessels and encourages blood flow. This improved blood flow rushes oxygen and nutrients to the areas of the body that need them, such as working muscles. Other pump ingredients, such as arginine or citrulline, can do this, too. What separates NitrosigineⓇ from the rest of the pack is the degree to which it raises NO, and for how long its effects last!

In research from 2015, scientists administered 1500mg of NitrosigineⓇ daily for four days in a double-blind, placebo-controlled manner. 72 hours from the initial dosing, subjects performed leg extensions and had different metrics measured. The researchers found that the NitrosigineⓇ group had larger rates of blood flow due to vasodilation and reduced levels of perceived fatigue.[5] With more NO, subjects felt more energetic and had better “muscle pumps”!

The difference-maker – the effects last longer

Enhanced NO production, in isolation, typically vasodilates and raises energy, so other ingredients like citrulline have similar effects. The true differentiator between NitrosigineⓇ and ingredients like citrulline is the duration of effects. Research has shown that this arginine-inositol-silica complex can hit within as little as 15 minutes,[5] while lasting for as long as six hours![6]

Additional research suggests that this long-lasting effect is a byproduct of reduced arginase activity induced by NitrosigineⓇ.[7] Regardless, these pumps can last almost a third of the day – that not only increases the blood flow during exercise that improves endurance, but also the post-exercise blood flow that aids recovery!

For more information, be sure to check out our article on NitrosigineⓇ published in 2018, which will be updated with the latest Arkansas data once it’s fully published.

One thing we’ve learned is that Nutrition21 is not just an “ingredient company” — they’re researchers first and foremost. For instance, their Chromax chromium picolinate has a whopping 35 human clinical studies under its belt. Yet this Arkansas study is different and exciting because the company wasn’t involved in it, adding further weight to NitrosigineⓇ’s cause.

We’ve long recognized NitrosigineⓇ as one of their best NO boosters around, with significant amounts of research supporting its use for vasodilation and increasing workout pumps. This new research from the University of Arkansas not only corroborates that story, but adds an interesting wrinkle for supplement brands.

Ultimately, 1.5g of NitrosigineⓇ was shown to be as effective as 8g of 2:1 citrulline malate (5.333g citrulline), allowing formulators to save space for additional ingredients. When looking to maximize the efficiency of a label, they may be more inclined to use less and achieve more.