Built from the ground up!

RAW Nutrition, a cutting-edge sports supplement brand from the creators of Revive MD, is finally here and we’re pumped to start covering their comprehensive product line! Last time RAW Nutrition was featured on the PricePlow Blog, we gave a brief overview of what to expect, but now it’s time to dive deep into each product to see what makes them stand out – and we’re starting with RAW Pump!

RAW Nutrition’s motto is “Built From The Ground Up“, which fits their product line exceptionally well. Their formulas are built from high quality ingredients that are backed by research and shown to deliver the results you’re looking for. On top of that, RAW Nutrition has nothing to hide — they post third party test results on their website, use fully transparent labels, and work with some of the best ingredient suppliers in the industry, like Nutrition21.

RAW Nutrition was created to fuel elite level athletes, competitors, and anyone else who takes their health and fitness goals seriously — people that have perfected their nutrition, training, sleep, and recovery, but are still looking for an extra edge. They take care of your sports performance supplements, so you can focus on everything else that will help you achieve your goals.

RAW Nutrition offers a complete line of supplements geared towards optimizing your performance, and the one that stands out the most to us is RAW PUMP. We almost always instantly gravitate towards a new brand’s pre workout — but this time it’s a touch different. This isn’t your typical pre workout that’s loaded with caffeine… RAW Nutrition decided to take a completely different approach and create a stimulant-free pre workout with no caffeine whatsoever. 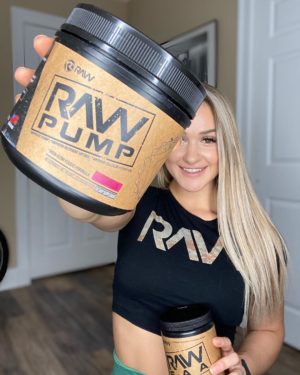 RAW Pump doesn’t contain caffeine but it has everything you need for an intense workout!

The name “RAW Pump” fits this product perfectly, since it’s loaded with clinically studied ingredients that are known for increasing blood flow, nutrient delivery, and muscular pumps! Matt Jansen, Co-Founder of RAW Nutrition, will always be a bodybuilder at heart, so it’s no surprise that he created a product that delivers skin splitting pumps.

Not only will RAW Pump increase your ability to get a pump, it will also boost your performance by helping shuttle nutrients and oxygen to your working muscles, allowing you to lift more weight for more reps, which in turn will lead to muscle growth (assuming protein, diet, and sleep are in line)! Furthermore, it contains a host of ingredients that enhance focus, mind-to-muscle connection, and muscular endurance.

One of the ingredients that stands out most in RAW Pump is none other than Nitrosigine from Nutrition21, a patented compound that’s clinically proven to outperform leading nitric oxide boosters on the market.

Everything you need to know about RAW Pump is down below, but before you read anymore — sign up for RAW Nutrition news and deal alerts because they’re just getting started!

RAW Pump has a solid blend of ingredients that boost muscular endurance, power, and pumps, along with the mind-to-muscle connection and overall mental focus. It’s definitely a well-rounded stimulant free pre workout that has everything you need for an intense workout.

As you can see, the supplement facts panel features the dosages for each ingredient based on whether you want to do a one scoop or two scoop serving size. We always recommend starting with one scoop to assess your tolerance — and with how loaded this formula is, it may be all you need for a while, saving money. But since most of our readers are accustomed to these pre workouts, we’re going to see what the full two scoop serving delivers for this ingredient breakdown!

Here’s a list of all available flavors for RAW Pump:

RAW Nutrition Is Starting Off Strong!

Behind RAW Nutrition is a team of industry experts that have already built a successful brand that continues to grow and become even better. Matt Jansen and Dr. Domenic Iacovone highly values honesty, transparency, efficacy, and results. They aren’t willing to compromise, which is why they decided to take their years of experience, knowledge, and skills to create another brand focused solely on sports nutrition. 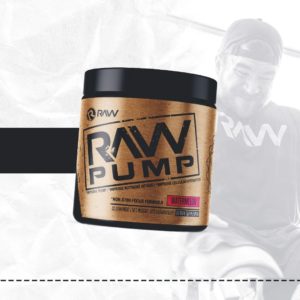 A non-stimulant pre workout that’s ready to take your workouts to the next level.

Just by analyzing RAW Pump, you can tell that RAW Nutrition is doing things right by using clinically studied dosages, patented ingredients, and transparent labels. These three factors are the same thing that’s made Revive MD a leader in the health and wellness supplement scene. RAW Pump is extremely well formulated and we’re thrilled to see that RAW Nutrition is using a cutting edge ingredient — Nitrosigine — to give the consumer the best results.

RAW Nutrition is starting off strong, but they have plenty of more products to offer. If you haven’t checked out their line yet, we highly recommend doing so. They practically have everything you need from protein powders to intra workout supplements — each product is formulated with results in mind. Let RAW Nutrition take care of your supplementation, so you can keep focusing on the training, nutrition, and recovery. Subscribe down below for more exclusive reviews, news, and deals from RAW Nutrition!