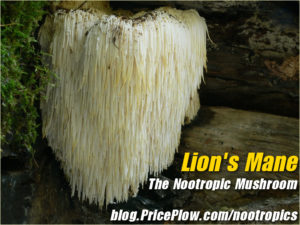 If you’ve been keen to the nootropic world lately, you’ve probably seen a certain member of the Fungi Kingdom showing up more frequently. This mighty mushroom is rather impressive and could be said to be pure “magic”, but probably not in the same way you’re used to thinking about mushrooms.

We’re of course talking about Lion’s Mane. This brain-boosting super ‘shroom is clearly bringing some serious nootropic benefits and we’ve got all the details ahead on why it should be a staple in any nootropic stack, especially since it’s so much different than the standard choline / L-Tyrosine style compounds many nootropic beginners start with.

What is Lion’s Mane?

Scientifically known as Hericium erinaceus, Lion’s Mane is an edible mushroom used extensively in traditional Chinese and Japanese medicine throughout history for its healing properties.[1,2,3] You may have also encountered it before under one of its other names,[4] including:

What does Lion’s Mane do?

Lion’s Mane is naturally rich in several vitamins and minerals, but also contains some particularly unique compounds including compounds such as erinacines, erinacea lactones, glycoproteins, hericerins, and polysaccharides (beta-glucans).[5] These bioactive compounds are believed to be the elements responsible for the plethora of benefits Lion’s Mane has to offer. Among the long-list of benefits (which we’ll get to more in-depth below) include[4,5]:

While the list of benefits resulting from Lion’s Mane is long and distinguished, recently it’s gained considerable popularity in the nootropic community when it was found to affect Nerve Growth Factor (NGF), a protein that’s vital to the function and survival of nerve cells.[6] Lion’s Mane has been shown to increase the amount of Nerve Growth Factor in the brain[12], which improves cognition by promoting neuronal growth, reducing inflammation, and supporting overall brain health.

Suffice it to say, Lion’s Mane is an incredibly intriguing and unique nootropic that could be a valuable addition to any brain-boosting supplementation regimen. Now, let’s dive a little deeper into the myriad of benefits this mushroom has to offer. 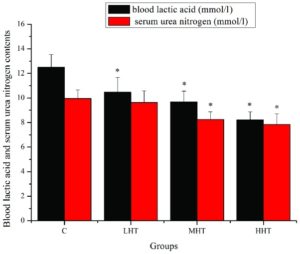 Since the primary focus of this article is on the nootropic benefits of Lion’s Mane, we’ll simply list the other benefits attributed to the mushroom’s consumption but not dive too deep into them:

Dosing of Lion’s Mane really depends on the quality (strength) of the extract. Ideally, you want to get one that contains at least 20% beta-glucans. A good starting dose for a 20-30% beta-glucan Lion’s Mane extract is 500-1000mg. 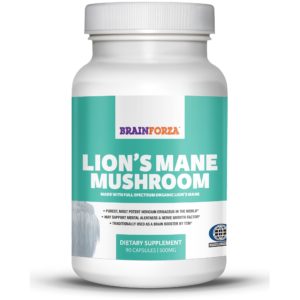 Look for a premium quality extract of Lion’s Mane from Brain Forza.

However, if you’re using a weaker extract you may need to consume several grams of the extract to get enough of the “good stuff” that we described above. The two human study done on Lion’s Mane used a dose of 1,000 mg with 96% purity three times per day for a total of 3g Lion’s Mane extract[7], and the other “cookie” one treating anxiety and depression used a total of 2g / day divided across 4-0.5g doses.[15]

Given the extract strength recommendations above, we currently recommend Brain Forza Lion’s Mane, which is loaded with beta-glucans and receives high reviews:

Lion’s Mane is generally considered safe with little to no adverse side effects resulting from its use. Anecdotal accounts note that some people do experience a bit of an “itchy skin” feeling, which is believed to be caused by the increased Nerve Growth Factor synthesis.

Lion’s Mane has been extensively tested in mice and shows no signs of toxicity, even when dosed up to 5g/kg.[30]

Lion’s Mane is best suited to long-term use, but if you’re looking for some immediate/acute benefits from the super ‘shroom, consider stacking it alongside a member of the racetam family (such as our favorite, phenylpiracetam) along with a high-quality choline supplement such as Alpha GPC or CDP-Choline to prevent any choline depletion-induced headaches.

For long-term cognitive health and improvement, consider stacking Lion’s Mane with Uridine (from CDP-Choline) and fish oil, which support cell membranes as well as Acetyl L-Carnitine (ALCAR) which reduces brain cell apoptosis (death). You could also include some supplemental zinc too, if your diet is lacking, since zinc is involved in regulating synaptic function.

Lion’s Mane is an exceptionally powerful mushroom; one that touts a number of nootropic and general health benefits. Simply put, it’s one magical mushroom that deserves a lot more attention and one that should be included as part of any nootropic stack.