Note: GlycerPump was renamed to GlycerSize in 2019. It performed very well as a glycerol ingredient in 2018-2019.

However, in 2020, NNB Nutrition launched HydroPrime, which has won in stability/humidity testing, making it our new preferred glycerol powder.

What do these four characteristics have in common?

They’re all attributed to glycerol.

Yes, the ingredient has been a staple of sports supplements for almost a decade now, and while its benefits are tough to question, it always winds up creating solidified chunks of cemented pre workout… until now.

An Australian nutraceutical supplier has come up with a superior form of glycerol supplement in GlycerPump. This one brings all the cell-saturating, muscle-pumping benefits of glycerol without the horrendous clumping of all previous forms of the compound.

Before we get to the nitty-gritty of GlycerPump, let’s first do a quick refresher on glycerol itself – but note that we have a complete write-up in our post titled Glycerol: The Ultimate Guide for Hydration, Heat Protection, and Pumps.

Glycerol is a naturally-occurring trihydroxy (three hydroxyl group) sugar alcohol that is an intermediate in carbohydrate and lipid metabolism.[1] It’s also used as pharmaceutical agent, sweetening agent, emollient, and solvent and can be found in everything from air care products to explosive materials.[1]

You’ll also find it under the synonyms:

How does it Work?

As you can see from the graph, glycerol supplementation has an increasing effect on aerobic power.[2]

Glycerol accumulates in body fluids, except those found in the eyes and brain, increasing osmotic pressure and the total volume of water in the body. It can also be used as an energy substrate, and if consumed in large enough quantities, could contribute to the energy yield during training.[1]

When glycerol is consumed orally, as in the case of sports supplements, it’s rapidly absorbed by the body and distributed between fluid compartments before being metabolized by the liver and kidneys. If it’s consumed along with a hefty amount of fluid, osmotic pressure increases which helps your body retain that large volume of fluid and leads to the expansion of various fluid spaces in the body. This creates a state of “hyperhydration”, which is of great benefit to hard-training athletes, particularly endurance athletes.[2-4]

Benefits of Glycerol Supplementation for Athletes

Glycerol has been and continues to be a popular ingredient in pre workout supplements. It’s been shown to offer a slew of benefits, some which you may not have ever heard mentioned: 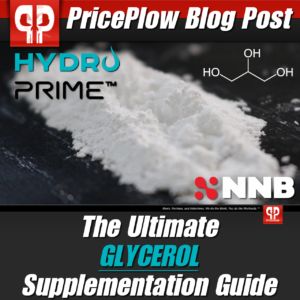 When it comes to hydration, endurance, cell volumization, and heat tolerance, water is king. And this simple ingredient — glycerol — enables you to hold more water for better performance! Read more about Glycerol and our preferred ingredient, HydroPrime.

Initially, glycerol was included in sports supplements primarily in the form of glycerol monostearate (GMS). GMS is composed of glycerol and stearic acid, which only about 25% at most consisting of actual glycerol.[7]

Due to this high fat content, GMS didn’t really dissolve all that well in solution, often leaving consumers with glycerol gobs on the sides of their shakers. Another problem with the high fat content of GMS is poor stability (due to its hygroscopic nature) and short shelf life.[8] The end result was many forms of GMS in supplements that only contained 5 to 12% glycerol by weight, so as to prevent degradation.[8]

This lead to the creation of the first high-yield form of glycerol called HydroMax by Glanbia Nutritionals. HydroMax received high praise when it first debuted as it offered the prospect of improved stability, increased shelf-life, and a greater amount of glycerol by weight (65%).[8] This seemed like a godsend to many supplement manufacturers as it did indeed seem to be a superior glycerol supplement.

But, as consumers slowly found out, HydroMax still eventually faced the same issues as GMS — too much clumping. This led to the development of the latest form of glycerol — one that would ultimately address the annoying clumping and fix the chalky textures that supplements had when dosed with high amounts of HydroMax.

Thus, a group of Australian innovators created the ultimate form of shelf-stable glycerol in GlycerPump, now renamed to GlycerSize.

GlycerSize is a stable form of glycerol powder released in 2018, yielding 65% glycerol content. The carrier for this new-age glycerol supplement is silicon dioxide. The uniqueness is the method of the spray-drying which creates the stability.

We recently sat down with the creators of GlycerSize to understand exactly how this form of glycerol stands apart from the rest and how it can avoid the clumping, grit, and chalky problems of previous glycerol iterations.

In the original version of this blog post, we were told that “GlycerPump contains no calories per 100g of product”. We now know this to be 100% false.

As a sugar alcohol, glycerol does provide energy substrate, and some research shows that is 4.3 calories per gram. Thus, a gram of 65% glycerol will yield just under 3g, depending on what it is mixed with.

Below, Mike checked to see if GlycerMax (now discontinued, but it was 100% GlycerPump) would spike blood sugar levels and/or drop ketone levels. It tasted really good, and anyone who doesn’t care about blood sugar or ketones (at least not around workout time) may enjoy it added to their pre workout.

However, glycerol does spike blood sugar, demonstrating that it is a caloric source.

Is a stable form of glycerol finally here?

Glycerol is indeed awesome, but it’s poor stability and mixability often leads to its underutilization in supplements. That’s no longer the case with GlycerSize. Improved stability, increased shelf life, and better taste and texture make GlycerSize the premier form of glycerol on the market. 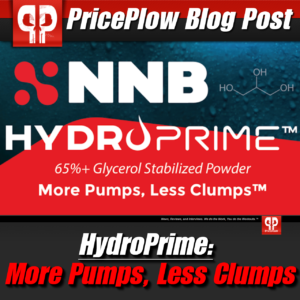 If you’re interested in trying it out for yourself, check out one of the listed supplements above, or keep your eyes peeled for new versions of some of your favorite pre workouts that will be incorporating this form of glycerol soon.

GlycerSize did well in the market, and had fewer clumping issues than previous generations of glycerol powders, but still seems to add grittiness to many formulas.

In 2020, NNB Nutrition launched HydroPrime, an even more stable and potent form of glycerol that can go as high as 72% yield, depending on what it is mixed with!

We also created a more in-depth guide to Glycerol titled Glycerol: The Ultimate Guide for Hydration, Heat Protection, and Pumps, and it should be read by all athletes interested in this ingredient.