5% Nutrition Core L-Citrulline 3000: Citrulline with a Hit of Glycerol

Posted on September 20, 2022 by Mike Roberto and Nick Andrews | No Comments

Most bodybuilding enthusiasts have heard of legendary bodybuilder Rich Piana. And most readers here know that he founded his own nutritional supplement company. He named it 5% Nutrition, as an allusion to his belief that only 5% of people on the planet have the grit, determination, and talent to achieve their highest potential and become the best possible version of themselves.

Rich founded his company to serve this 5% by creating premium supplements that support their mental and physical performance while in pursuit of their goals. 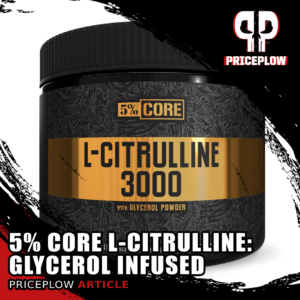 And Rich always knew that a little extra nitric oxide pump was a great thing to have – even in non-workout situations!

The 5% Take on Citrulline: No Nonsense

5% Core L-Citrulline 3000 is a no nonsense, back-to-basics approach to achieving added pumps – or slightly lowered blood pressure, which can be useful in many situations.

Citrulline is one of the most trusted and effective pump-inducing ingredients on the supplement market today, and is also incredibly safe, even in large doses. This means we can add more to your current stack, anytime, anywhere.

But 5% went further – as with most of the rest of the 5% Core Line, they don’t just go with single ingredients! Here, they’ve added a hit of glycerol to increase cellular hydration while at it.

The strength of a product like 5% Core L-Citrulline 3000 is not just that you can easily double or triple scoop it if you desire a bigger effect: you can also easily combine it with other products just to up the citrulline and glycerol as needed.

Normally, we’re huge fans of 5% Nutrition’s flavoring – and that’s why we’re not flavored here. Core L-Citrulline 3000 is meant to be added to your existing supplement to get an even more powerful boost. If you’re already taking a Rich Piana pre-workout supplement (Kill It Reloaded is our general go-to), you already have great flavoring, so just add this in.

Not just for pre-workout! 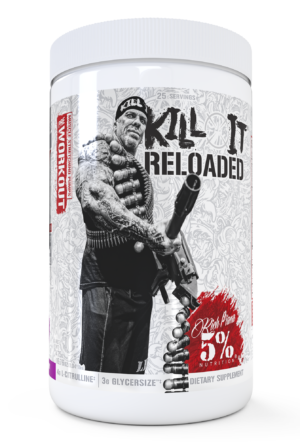 Need even more citrulline in Kill It Reloaded? You’re at the right place

But as we said in the intro, there are other reasons you’d want to improve nitric oxide levels. For instance, adding Core L-Citrulline 3000 to your Sleep Drink Grow sleep aid could theoretically help lower blood pressure and improve sleep.[22,23] Reason being, nitric oxide plays a key role in sleep governance.[23]

Additionally, the glycerol may help you retain more urine! You can read more about this in our article titled Urination at Night?! Add GLYCEROL to Your Sleep Aid!, which cites a few studies where athletes taking glycerol urinated less.

Getting back to athletics, another idea is to simply add it to your ALL DAY YOU MAY intra workout supplement to keep those pumps coming long into your Rich Piana style all day arm workout. There’s really never a time when some citrulline’s a bad idea!

Conclusion: Citrulline and a bit more

Supplement manufacturers try to outdo each other, a kind of pump arms race (no pun intended) has escalated. It’s gotten to the point where, most of the time, you see ingredients like citrulline and glycerol stacked with so many other ingredients that something in the formula limits how much of the product you can take.

So in this hypothetical product, you’re really limited to consuming a single serving, or less.

There’s not much more to say about this one – citrulline and glycerol are both awesome ingredients, ones that we would recommend to almost anybody because they just work.

Stacking them in a no-frills, two-ingredient formula creates a great, no-BS product that most supplement consumers will reach for again and again.