If you don’t know what we’re talking about, then it’s time you check out Ecto Plasm, Black Magic Supply’s incredible stimulant-free pre-workout supplement that plays numerous nitric oxide / pump angles. Aside from a Fruit Punch flavor, it also has a unique Purple Rain flavor that has become a fan (and PricePlow) favorite.

Ecto Plasm: All about the pumps… and Purple Rain 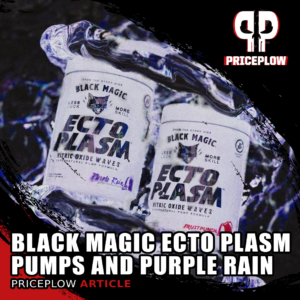 After our recent Black Magic Supply updates for 2022, Ecto Plasm is one of the first supplements we wanted to catch up on — especially given the new research on Nitrosigine improving working memory in healthy young adults. We’re to the point where Nitrosigine is not only a top-tier NO booster, but also a nootropic ingredient, thanks to the blood flow improvements it brings everywhere.

Below we get into the full 20 gram serving formula, just after some price checks and notifications so you can find out about new deals, flavors, and Black Magic Supply news:

Each 20 gram scoop gets you the following:

With no funky botanicals or unfamiliar ingredients, Ecto Plasm tastes incredible – as this is being written, we’re currently polishing off a tub of Purple Rain. Below are the flavors:

Ecto Plasm is all about the pump 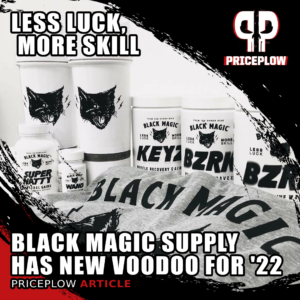 This is an incredible stacking partner to the insane BZRK pre workout. If you’re all about adding pumps and keeping them around for a long time, look no further than Ecto Plasm, because it stays in its lane as a stimulant-free nitric oxide / pump supplement.

However, the body of research on Nitrosigine’s cognitive effects is constantly growing, to the point where we do consider it to be a nootropic ingredient. This is mainly thanks to that cerebral blood flow it helps with.

Ecto Plasm has quietly been putting in work, and is one of the first things we wanted to catch up on after our recent Black Magic Supply updates for 2022. Sign up for the alerts below and we’ll notify you when there are new flavors, deals, studies, and more: