We’re usually pretty excited when Performax Labs releases a new product, as they have some of the most innovative and aggressive formulations on the market. In Performax’s 2021 rebrand, they upgraded the mood-boosting pre-workout formula HyperMax Extreme (3D), one of our all-time favorite fully-dosed high-stim pre-workouts. This is in addition to their nutrient-partitioning formula SlinMax that enables greater carbohydrate consumption, which pairs well with the unique and powerful AlphaMax natural testosterone booster. 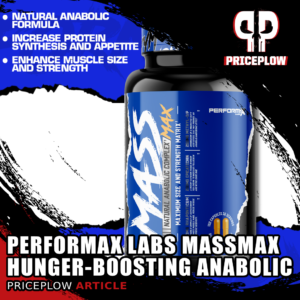 But there’s another supplement in their stack that doesn’t get enough attention – and it should, because it’s wildly underutilized and is perfect for those who are looking to put on as much natural muscle as possible. We’re talking about Performax Labs MassMax, their natural anabolic supplement that increases both appetite and muscle protein synthesis.

Performax actually released a version of MassMax before — it was known as MassMax XT — but it received a big facelift and some key ingredient updates. We never covered it until now, but looking at this formula, we definitely should have!

So let’s buckle up and take a close look at how the updated Performax MassMax can help you maximize your gains. But first, check the PricePlow-powered prices and sign up for our Performax Labs alerts, they have more innovations coming after this:

In a single 4-capsule serving of MassMax from Performax Labs, you get the following: 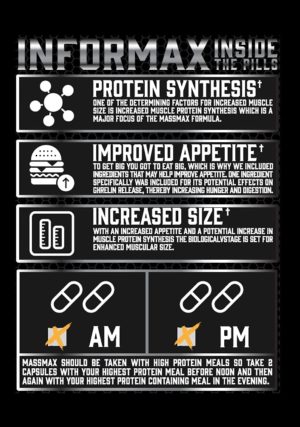 MassMax works best in a split dosage – two in the AM, and two in the PM with high-protein meals. See the image attached to the right.

There are some great ingredients here in MassMax – the fatty acid esters from honeybee drone milk are something we don’t see much at all, and the combination of those with ecdysterone puts this supplement on the cutting edge of the industry trends, even a few years after its initial release. Performax Labs has been ahead of the curve time and time again, so we’re not really surprised.

Atractylodes rhizome extract is a great thing to see – although there are tons of “mass gainer” calorie dense powders and such on the market to help hard gainers eat big, there aren’t many supplements that chemically stimulate your appetite. If you’re simply not hungry often enough, this effect alone makes it worth trying.

For maximum results, consider stacking MassMax with AlphaMax, and when you’re taking high-carb meals, consider them with SlinMax. Finally, the HyperMax + VasoMax pre-workout stack is one that must be tried at some point!