Over the past few months, we’ve covered the updated labeling and formulas through Performax Labs’ aggressive supplement product line. Their HyperMax Extreme + VasoMax pre-workout stack got updated, as did their popular fat burner OxyMax. 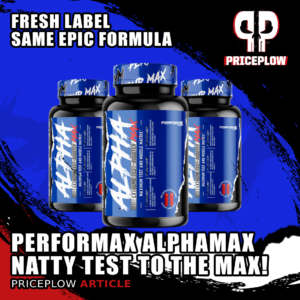 Performax Labs AlphaMax has the new look, but the same formula – and that’s a great thing because this natty test booster is a beast!

Today’s formula, however, does not need any updates – it’s already as powerful as it is novel, and Performax wisely kept the ingredient profile the same. The label, however, has the bold new look, so here’s our chance to explain why it’s such a great supplement.

We’re talking about Performax Labs AlphaMax, a natural testosterone booster that has ingredients to:

Below, we get into the science inside of these four capsules, digging deeper into DivaniMax, Performax Labs’ stinging nettle extract that has a component known as divanil that is extremely powerful but not as well-known in mainstream circles. Performax Labs is putting an end to that with this powerful blend.

The whole story’s below, after we show our coupon-based prices and Performax Labs deal alerts:

In four large capsules, you get the following all-encompassing matrix: 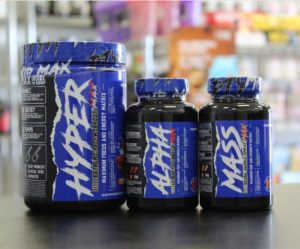 Now here’s a wild stack we can get behind!

Take four capsules daily – you could split it up into AM/PM doses (two each) if you like, since some of the ashwagandha studies utilized that approach and there are no stimulants inside. The pine bark extract may make this beneficial to take pre-workout, though, so consider it then as well.

On top of the Performax Labs pre-workout stack discussed in the intro, you could also consider adding the wildly interesting MassMax anabolic and appetite-booster, and pair it with IsoWheyMax whey protein isolate. 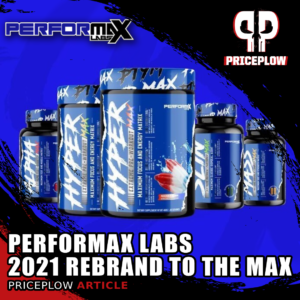 Performax Labs is pushing a rebrand that re-defines who they are — aggressive supplement formulators! Get ready for some potent products!

We’ve covered a ton of Performax Labs supplements the past few months (see our Performax Labs news page), thanks to their epic rebranding and hot new reformulations. They’ve kept things aggressive, and that’s exactly what we expect from the brand in blue.

While AlphaMax’s label got the new look, the formula went unchanged — and that’s a great thing. With the huge clinical doses that we’re seeing here (many of them doubled from the previous version named “AlphaMax XT” from years past), we don’t see a reason to change a thing. Just slap that new label on it and let’s get to work.

Those looking for male enhancement would love to stack this with VasoMax, and if looking for an incredible stimulant-based pre-workout that’s on another level, the new HyperMax Extreme is where it’s at. Dieters, however, can instead stack AlphaMax (with its forskolin content) alongside top-selling fat burner OxyMax to really amplify weight loss.

Overall, AlphaMax isn’t going to be like “going to the doctor”, but it should easily have some very noticeable effects that will have you walking a bit taller – so take it to the max.