It’s here by September 10th of 2021, and it’s more extreme than ever. We’re talking about the next generation pre workout supplement from Performax Labs, HyperMax 3D. 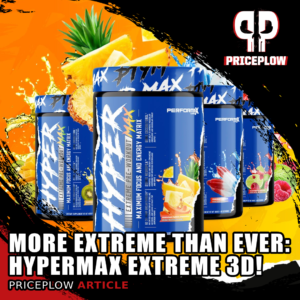 Performax Labs is bringing the house down with the latest in their HyperMax series. This could be your first chance to try 3DPUMP Breakthrough!

This comes with Performax Labs’ major rebranding and reformulation effort, where they’ve decided to keep their ultra-aggressive formulas. This should please customers, who are often disappointed when brands lighten up their formulas to reach more demographics. Not today!

After a wild round of beta testing, we can attest that Performax Labs has their most aggressive and well-dosed pre workout supplement yet. This is the brand who takes things to the max, and they’ve done just that in all the right areas.

The quick HyperMax 3D Extreme notes (in the two-scoop serving):

They’re also calling it “HYPERMAX-3D” because of the new 3DPUMP breakthrough, which we dive into today.

NEW HyperMax is here and it’s beyond extreme!

All in all, this one’s extremely high in energy, big on pumps (with a novel new ingredient), and has clinically-dosed ergogenic muscle-builders and endurance boosters. It hits all the angles, and you’re likely not going to need two scoops.

It’s all below, but first you can check out PricePlow’s prices and sign up for Performax Labs news and deal alerts since the brand slowly and steadily puts out rock star supplements:

This is a 2-scoop serving with 20 full servings per container. Each scoop weighs 11.5g, so you have a 23g serving size if you dare to go all in. Due to the stimulant dosage, many will land at just under 1.5 scoops, but that’s up to how extreme you want to take things:

Before knowing all of the ingredients, we were honored to participate in Performax Labs’ beta test, and came away with a couple intense workouts. But the thing we noticed most was the potency and euphoria with Hypermax 3D:

The PEA blend acts in well under 10 minutes, and hits with a wave of quality mood and energy support that should get you fired up to train no matter your situation. The pumps are as fantastic as advertised – but it’s the mood and energy burst that we keep coming back for — consistent with Performax Labs’ previous supplements.

This brand has set such a high bar for itself, we expect this level of energy from them. 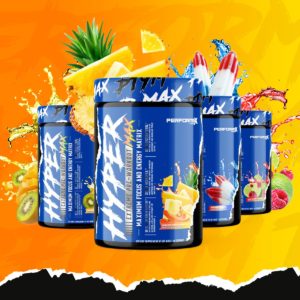 Below is a list of available flavors. The 2021 version launches in four unique flavors, Hawaiian Papaya Pineapple, Mango Kiwi Cooler, Rocket Bomb, and Raspberry Limeade, but maybe more will be added over time: 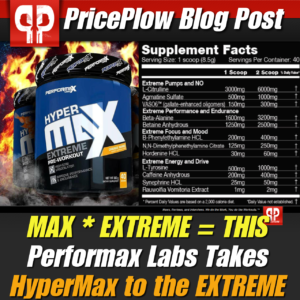 Our previous featured image for this article, with the 2019 label shown

The HyperMax pre workout series has been through a couple revisions over the years, and the new 2021 formula is the most promising one yet. Taking a stroll down memory lane:

It all started with HyperMax, which we covered as far back as 2014. Around 2015, Performax Labs then released HyperMax XT, which took on a new level of aggressive formulation, similar to what we see today. In late 2017, they changed the name back to “HyperMax”, and once that ran its course, 2019 brought us HyperMax Extreme. HyperMax Extreme was so good, they allowed the other formulas to discontinue.

Then, another two years later, we have this latest version of HyperMax Extreme, and it’s mower powerful, unique, and visionary than ever!

What an aggressive and novel pre workout supplement. As always, Performax Labs takes things to the max, and basically goes as hard as you can go without using DM*A ingredients.

We’ve long been a huge fan of Performax Labs’ products, and the HyperMax family has always been the flagship. However, don’t count out OxyMax, an incredibly popular fat burner that sells a huge amount, with high repeat customer rates. HyperMax 3D brings intense stimulation from that and adds a whole truckload of pumps, endurance boosters, and ergogenics. What more could you ask for?

The biggest question is where you’ll land dosage-wise. We ended up just under 1.5 scoops, but if you can rock out two whole scoops, you’re going to be training on another planet, with strength gains from even the caffeine, let alone everything else like the citrulline/glycerol plus taurine and your first time using 3DPUMP.

Performax Labs lives up to their name, and executed extremely well on an “Extreme”-themed supplement. Are you extreme enough to handle it?