Glaxon Anomaly: Muscle Builder That Tells Your Genetics to STFU

Posted on January 25, 2022 by Mike Roberto and Nick Andrews | No Comments 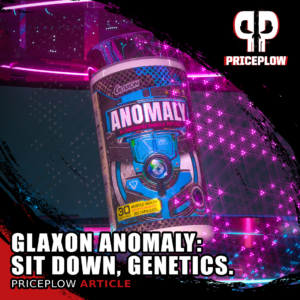 Glaxon Anomaly is an incredibly unique muscle-building supplement that downregulates catabolic-promoting genes and can promote more anabolic response. Get ready for a science lesson in this article

Paired with the Specimen pre-workout, PROTOS Whey, and perhaps the Alpha 365 test booster, you’d think they were good to go on the muscle-building front.

But not Glaxon — they’ve just released another exciting product, launching in multiple limited-edition batches, and the research is fascinating to say the least.

Glaxon Anomaly: An anabolic muscle-builder that instructs your body to keep more muscle

Glaxon Anomaly is a unique fava bean-derived peptide formulation that’s designed to maximize anabolic response. It works using informational pathways that uniquely tell your body to preserve muscle mass and avoid wasting it, using numerous mechanisms that are anabolic, anti-catabolic, and even hormonal.

Paired with the supplements above, it puts Glaxon on another wavelength when it comes to promoting muscle. We’ve got the science below — and it’s in-depth — but first, see if it’s available through PricePlow:

If you’re a veteran of the fitness industry and the “macro wars”, you might feel a little confused when you look at the supplement facts panel for Glaxon Anomaly. After all, in a single six-capsule serving, there are only 2400 milligrams (2.4 grams) of material. In the context of standard bodybuilding advice, which is to eat somewhere between 0.75 and 1.00 grams of protein per pound of bodyweight daily, 2.4 grams is a paltry amount of nutrition.

So how could 2.4 grams of a protein-based ingredient make such a big difference to your anabolic response? Keep reading to find out what makes the fava bean hydrolysate peptide special.

The Human Body Runs on Information

“Weight loss is just thermodynamics.”
“Calories in, calories out.”
“A calorie is a calorie.”

We’ve all heard these ideas before – and in most applications, they can be a rough version of the truth. 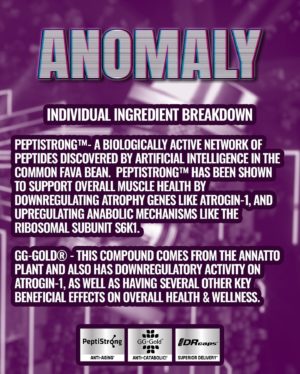 The Glaxon Anomaly Breakdown, per @iamglaxon on Instagram — this is the stuff you get to look forward to reading below

But are all calories created equal?

Not exactly. The human body is not a machine, and it’s certainly not a bomb calorimeter. It’s a complex system with many interdependencies – and its workings are governed largely by informational processes. Information – when a particular food or drug provides your body a set of biological instructions – is what’s at work when we talk about different molecules or metabolic pathways being “upregulated” or “downregulated” in the body.

Because of these informational mechanisms, researchers are increasingly acknowledging that food has biological effects “beyond the purely nutritional”[1] – certain compounds in food have the potential to even alter the expression of your genes, which can modify your risk for cancer and other diseases.[2,3]

Ultimately, everything you eat or drink has a particular endocrine effect. Open any standard medical textbook, and you will find the hormones that comprise the endocrine system described as the “messengers” of the body – because they carry information from one part of the body to the other.

If we want to achieve optimal health, we have to harness these informational mechanisms – genes, hormones, and metabolic switches – and make them work for us.[4]

The Informational Properties of Protein

When it comes to protein and muscle building, we’ve all heard this example of mechanistic thinking: eat more protein because more protein equals more muscle.

Generally speaking, this mechanistic conception is true. Countless research studies indicate that consuming a high-protein diet is the best way of eating if you want to stay lean, strong, and metabolically healthy.[5-9] There are many reasons for this, and some of them are mechanistic, such as the thermogenic effect of protein being higher than that of carbs or fats.[10]

But again, different proteins have different informational effects. For example, ingesting amino acids in the wrong ratio – i.e., not balancing a high intake of muscle meat with gelatin-rich organ meat) can dramatically raise hormonal stress levels in the body, pushing it toward a hypothyroid-mediated catabolic state.[11]

So now you’re probably wondering, if over-eating certain types of protein can potentially have catabolic effects, are there specific proteins that yield more anabolic effects?

The answer is yes, and as we will see, some proteins are uniquely anabolic because of their informational properties.

In a single six-capsule serving of Glaxon Anomaly, you get two ingredients: 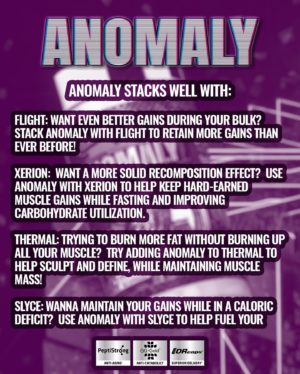 On top of this, be sure to make sure you have enough creatine to provide those added phosphate groups suggested above!

Glaxon suggests that you take all six capsules on an empty stomach post-workout (or before bed on rest days).

This is also a great time to stack in Glaxon Flight, their regenerative growth and recovery supplement. In addition, we suggest using creatine (such as Glaxon DR. Creatine) sometime in your day – it could make sense to take it pre-workout to get the phosphate donor ready to deploy. And of course, Glaxon Specimen or the extra-insane Glaxon Specimen G.F.Y pre workout as well.

It goes without saying to keep your protein high – Glaxon has PROTOS Whey or PROTOS Vegan to help you there.

Note that Glaxon is using DRcaps, providing a delayed release effect that bypasses early digestion and breakdown. These are also used in their Dr. Creatine capsules – hence the name!

The amazing thing about Glaxon Anomaly is that it’s engineered to achieve many of the goals we expect from “pharmaceutical anabolic” use – without additional risks, such as permanent damage to the HTPA (Hypothalamic-pituitary-adrenal) axis from runaway negative feedback mechanisms in the steroidogenesis pathway… and without causing overtly masculinizing effects in women.

It’s perhaps the first informational — as opposed to hormonal — anabolic supplement on the market.

Only time will tell what the full potential of this revolutionary concept can be, but we at PricePlow are extremely optimistic about it. Given the undeniable brilliance of Glaxon and the way they’re taking the industry by storm, We think this might be the beginning of the next big thing.