Posted on December 30, 2021 by Mike Roberto and Nick Andrews | No Comments

Glaxon releases high-quality, highly-amplified supplements, and this one is no different

Long-time readers of The PricePlow Blog will know that we’re huge fans of Glaxon, a supplement industry newcomer launched in late 2019 that rapidly became known for extremely innovative formulas backed by the bleeding edge of nutritional and biochemical research.

No matter how many times something has been done before, Glaxon finds a way to do it better and more aggressively, while keeping it legally compliant. We recently analyzed their premium milk-based protein supplement, PROTOS Whey, whose scientific sophistication and elegance was simply mind-blowing.

PROTOS Whey looks incredible – but what if I’m dairy-free? 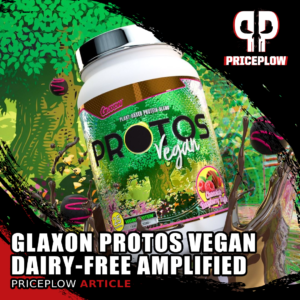 Looking for a vegan protein powder that does more? Get ready for Glaxon Protos Vegan!

PROTOS Whey was such a nutraceutical tour de force that we were stoked to hear Glaxon had put their own spin on a dairy-free protein alongside it. Vegan protein is a complicated subject, and for those who follow the vegan diet, understanding it and implementing best practices is crucial for long-term success due to the common deficiencies that must be avoided.[1-6]

But vegan protein supplements aren’t just for vegans: whey protein may dominate the market, but many omnivorous people are intolerant of dairy, or simply prefer not to eat it. For this market, quality protein options are as few and far between as they are for vegans – and it’s always the sports nutrition market (often led by Glaxon) that finds ways to improve it.

Whether you’re a vegan dieter or someone looking for a dairy-free alternative, take heart: in Glaxon PROTOS Vegan, your premium protein supplement has arrived.

In this article, we jump right to the solutions provided by Protos Vegan, including their new vegan-based Myo-Seq amino acid blend, as well as some amplification factor with Nutrition21’s Velositol. But first, see our coupon-powered prices and get signed up for our Glaxon alerts, because they always have new surprises in store: 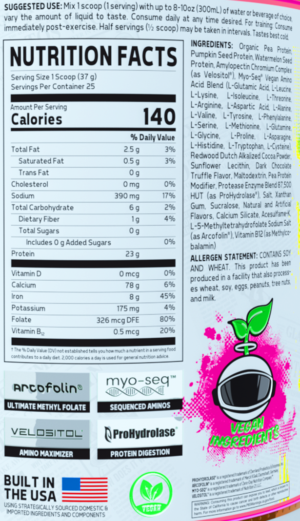 The first thing you should note about Glaxon PROTOS Vegan is that it’s based primarily on pea protein and pumpkin seed protein, both of which are among the few complete whole-food plant protein sources.[2,7] Although this protein blend will still be somewhat low in the essential amino acid methionine, but many argue that restricting methionine is potentially good for glucose control, general metabolic health, and longevity,[8-10] and may be one of the vegan diet’s primary benefits for some – even though methionine is generally considered an “essential” amino acid.

As for the other 8 essential amino acids, they are all well represented here.

Before we dig into the “macro wars” and further discuss protein bioavailability, let’s take a look at the flavors Glaxon has put these ingredients into:

So, why are we here in the first place? This should be well-known at this point, since good health starts with protein consumption:

Protein: a resolution to the “macro wars”

If you’ve been in the health and nutrition world for any length of time, you’ll know all about the so-called “macro wars” that have been raging for decades. The basic divide is between those who advocate for a high-carb, low-fat diet, or a high-fat, low-carb diet – the middle ground is increasingly thin. 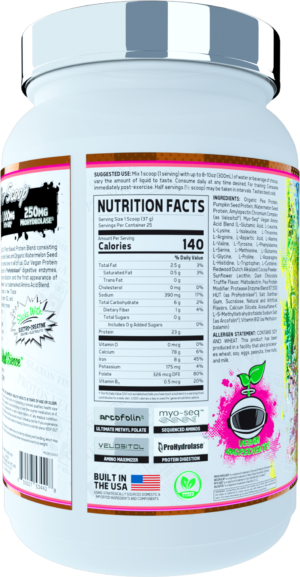 But fortunately for those of us who have endured so many unending arguments about carbs and fat, a broad consensus is coming into view:

It’s all about protein!

The latest research is clear: a high-protein diet is the best macronutrient profile for staying lean, strong, and metabolically healthy.[46-50] Different ratios of carbs and fats seem to work more or less equally well, so long as protein intake is high.

A big part of its success is from the thermogenic effect of food, the amount of energy our body spends on digesting what we eat: protein has a significantly larger thermogenic effect than either carbs or fats,[48] helping keep our net caloric intake in a favorable range, and thus, maintain a healthy weight.[48]

But what does “protein” mean?

And as for quality, we need to eat amino acids in specific ratios for optimal health, making some protein sources are more complete or balanced than others.[51]

Although a vegan diet can be done well, it must be done intentionally. Certain pitfalls must be consciously avoided. The main problem is that generally speaking, plant protein is of a lower quality and bioavailability than animal protein.[52] This is why it’s so nice to have ingredients like Velositol and ProHydrolase added here.

In developing countries whose major protein sources are typically unrefined cereal grains and legumes, the traditional diet shows protein bioavailability levels as low as 54%.[23] This is largely due to the presence of anti-nutrients in unrefined grains and legumes, key examples being phytic acid, which binds to nutrients in the gut before they can be absorbed, and compounds that inhibit key digestive enzymes like protease and trypsin.[23] 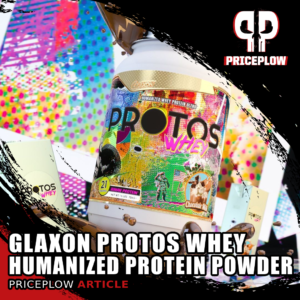 We’ve been waiting two years to see how Glaxon would “Glaxonify” a protein powder. Their humanized PROTOS Whey does not disappoint.

The upshot is that if you’re getting all your protein from plant sources, you will need to consume about 25% more total protein than somebody who’s eating an omnivorous diet.[53]

Not a huge difference – but those are minimum requirements. If your goal is to build muscle and maintain a lean body composition, you should know that for optimal protein synthesis while following a resistance training program such as weight lifting, the recommended protein intake is doubled to about 1.7 grams per kg per day.[1]

For a 150 pound person lifting weights and eating an omnivorous diet, that works out to about 116 grams of protein per day. Many do far more.

But if you’re eating a vegan diet, we need to make the 25% correction we discussed above – meaning that for vegan athletes, a protein intake of about 145 grams per day is optimal.

In other words, if you’re a vegan athlete, you need to eat almost 30 grams more protein per day than an omnivorous or carnivorous athlete. A 30 gram difference is nothing to sneeze at, especially for ectomorph “hard gainers” who often struggle to eat enough under the best of circumstances.

And unfortunately, although protein is the most important macronutrient to eat in adequate amounts, it can also be the hardest, because it’s the most satiating.[54] 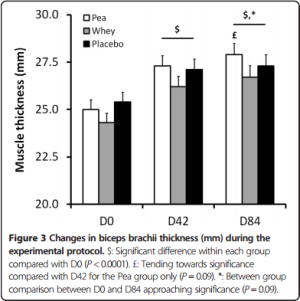 Pea Protein and Whey Protein were both significantly better than placebo (not surprising), but not significantly different from each other.[11]

Yet it can’t just be any protein: it needs to be complete protein. By “complete”, we mean that the protein source that contains all nine essential amino acids – a deficiency in any of which can interfere with muscle synthesis.[55]

Thus, it is crucial for anyone following a vegan diet to choose their protein sources carefully: you must either eat the few plant proteins that are naturally complete, or combine various incomplete plant proteins to get the full amino acid complement.[13]

Complicated enough for you?

By now, you can see how eating a vegan diet brings unique and nuanced problems to your nutritional strategy.

Those problems are exactly what premium vegan protein supplements like Glaxon PROTOS are designed to solve.

We hope that instead of feeling overwhelmed, our vegan athletes come away from this article with greater confidence that they can adhere to their preferred diet without sacrificing anabolic potential or athlete performance. Nevertheless, it should be clear from the preceding discussion that certain challenges do exist, and must be managed carefully. 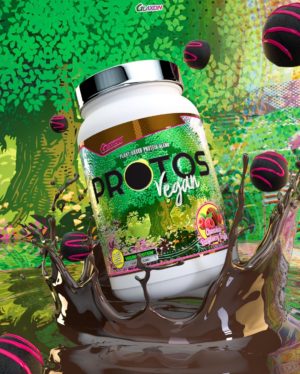 For the vegan athlete, supplemental protein is highly recommended. One of the big advantages of protein supplementation for the vegan athlete is that the manufacture of plant protein isolates will strip away most of the “anti-nutritional” compounds that interfere with protein bioavailability, which we discussed above, meaning that protein bioavailability of vegan protein supplements will be much closer than whole plant foods to what you’d expect in animal products.

Because of this, there is probably a clearer case for vegan athletes to take supplemental protein than there is for anyone else.

Vegan athletes stand to benefit uniquely from protein supplements, and we think Glaxon’s PROTOS Vegan is a uniquely awesome product for this need. Between the careful selection of awesome protein sources, and the inclusion of Velositol and supplementary enzymes to push the bioavailability of those proteins even higher – to say nothing of Myo-Seq for helping achieve optimal amino balance – we think this is a totally awesome supplement formula.