Glaxon SPECIMEN: A Pre-Workout Formulated For All The Stim Junkies Out There

Note: In 2021, Specimen has been upgraded to Glaxon Specimen V2, available in both yohimbe-based “Yo-Yo” version and a yohimbe-free version. If you want the original Specimen, see if any are available below, otherwise head over to our Specimen V2 article. 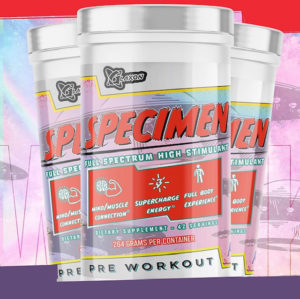 Specimen has finally arrived for all the Glaxon Goons out there!

Just before the new year, Glaxon ended with a bang by introducing a very ‘out of the box’ energy/focus product named Hybrid and an overly-anticipated full-spectrum high stimulant pre-workout supplement, Specimen.

Are you a serious stim-using Specimen?

This one is formulated for all the stim junkies out there, providing 400mg of caffeine, plenty of B-vitamins, and other potent stimulants to get you up and running. Not only does it pack you full of energy, but it is also designed to give you laser beam focus and help you get a bit of a pump… but this one’s really all about the stim.

Specimen launched in two never-before-seen flavors: Alien Pop and Molecular Candy. Don’t be fooled by the ingredient panel, this one is a heavy stim-hitter and we bet you won’t need a full scoop this pre-workout.

Before we analyze the fully disclosed high-stim ingredient panel, be sure you’re subscribed to PricePlow’s Glaxon news alerts to get the best prices with our exclusive coupons and deals – because this brand is on to huge things:

For all you stim-junkies out there, this one’s for you! Glaxon designed Specimen to give you long-lasting energy, while also adding ingredients to ensure you’re hydrated and have some increased power output!

With far-out flavors and a fully stim-loaded ingredient panel, Specimen is not going to disappoint anyone who is looking for an insane energy boost in the gym.

Let’s dive into what a full scoop (12.6g) of Specimen has to offer! 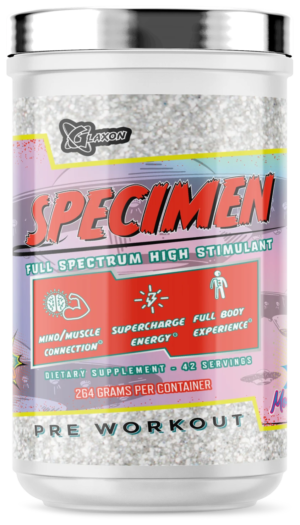 With a flavor like Molecular Candy, how can you *not* want to try this?!

As you can tell, this pre-workout is stacked with stims, giving you more than enough energy to get through grueling workouts. On the other hand, it’s pretty clear that this isn’t going to be chasing the most nitric oxide pumps on the planet. For that, you’ll need to stack.

Specimen makes sure you stay hydrated with key electrolytes

To round out this hefty formula, highly bioavailable forms of magnesium, potassium, and sodium are included to ensure you stay hydrated and get the most out of your workout. These minerals are crucial for regulating blood pressure, fluid balance, and muscle/nerve function. This is just another bonus to the long-listed formula.

Specimen is available in the following flavors (the list below will stay up-to-date):

Listen to Joey Savage of Glaxon Explain it himself!

Want to get deep into the details?! Then this is a must-watch video, especially if you want to learn about the “Yo Yo Blend”:

As you can see throughout this article, Glaxon is bringing some seriously unique branding. When Mike and Ben got together at the end of 2019 to close down the year, they made a video of brands to watch for 2020. The top brand, and with good reason? Glaxon.

Wow, now that’s a way to introduce a brand to PricePlow Nation!

PricePlow’s supplement brand to watch for 2020 is no other than Glaxon!

Specimen is clearly not for the faint of heart, especially if you are sensitive to caffeine or alpha-yohimbine. If you want to give it a try, then we highly suggest starting with a half scoop to assess tolerance. You likely won’t need a full scoop to get enough energy and focus to annihilate your workout.

For those of you looking for an absurd kick of energy, we think we’ve found exactly what you are looking for. Specimen is also designed to be stacked with Glaxon’s non-stimulant pump product Plasm Surge which will allow you to determine just how much caffeine you want to take prior to a workout.

Overall, PricePlow is very excited to see what’s next for Glaxon in 2020. We are expecting more unique formulas, products, and flavors coming soon, so be sure to stay tuned to PricePlow and Glaxon for exclusive deals and news!