Glaxon Plasm Surge: A Non-Stim Pre Workout That’s Out of This World 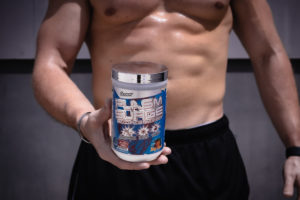 Allow us to introduce you to the new Plasm Surge.

Glaxon launched at the tail end of 2019 and has maintained an impressive lineup of products since that time. One of the first products they released was Plasm Surge, a stimulant-free pre-workout designed to increase blood flow to the extremities and improve muscular endurance.

Plasm Surge is the polar opposite of their stim junkie pre-workout, Specimen, which is all about increasing physical and mental energy levels, mood, and focus. There’s no doubt that Specimen hits harder than it looks, but if you’re looking for more of a pump-inducing pre-workout then Plasm Surge is the way to go!

You may be wondering why we’re covering Plasm Surge now, since it’s been out for months.ell, Glaxon has something special in store for all the Goons out there. Not only is Plasm Surge getting an updated label design, the company is also revamping the formula and adding ingredients we’ve never seen before!

Plasm Surge: Made With Real Science

Joey Savage, Glaxon’s chief formulator, has worked in the supplement industry for years, but now that he’s with Glaxon, the chains are practically off and he’s allowed to let the creativity flow with novel ingredients and formulas consumers love. 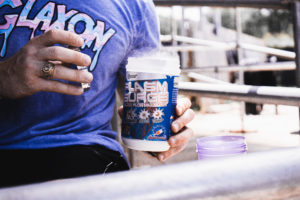 No stimulants, all pumps!

If you’re familiar with the old Plasm Surge, then you may have noticed that Glaxon removed the glycerol and agmatine sulfate, and swapped out the N-Acetyl-L-Cysteine for Setria, a trademarked form of L-Glutathione. They also included never before seen trademarked ingredients—AstroLyte and Velox. AstroLyte consists of fructooligosaccharides, magnesium, sodium, and potassium, whereas Velox is a combination of 6000mg of L-Citrulline and 1200mg of L-Arginine.

Plasm Surge has the same dosage of L-Ornithine Hydrochloride and Vaso-Drive AP, but an additional shot of AstraGin to enhance overall absorption of each ingredient.

Plasm Surge is the first product to be reformulated and redesigned. Since the Goons are always up to something, be sure to subscribe to receive Glaxon deals and news alerts down below! Now, let’s see what the new Plasm Surge has to offer…

Plasm Surge has an interesting new formula that now features five trademarked ingredients. It can stand on its own or users can stack it with stim-based pre-workouts, such as Specimen. If you’ve tried other pump products in the past and were disappointed, don’t worry because Plasm Surge won’t let you down.

It’s loaded with everything you need to get an insane pump and boost overall performance. And you may only need half a serving to unlock all the benefits Plasm Surge has to offer.

Here’s what one serving (16g) of Plasm Surge delivers:

Glaxon is known for developing flavors that are out of this world. For example, their flagship product, Specimen, comes in Alien Pop, Molecular Candy, and All-American Ice. And other Glaxon supplements come in flavors that are truly unique.

The first three flavor variations Glaxon is releasing for Plasm Surge are Americanade (Bomb Pop), Juicy Apple (apple juice), and unflavored. If there’s one thing that Glaxon enjoys it’s shaking up the supplement industry and their flavors are just one way they accomplish that.

Here’s an updated list of all available flavors for Plasm Surge:

Glaxon Is Just Getting Warmed Up

Plasm Surge is the first Glaxon product to get an updated formula, but we highly doubt it will be the last! Glaxon is known for bringing novel ingredients to consumers, in addition to their wacky cartoons, creative graphic designs, and mind-blowing scientific YouTube videos. 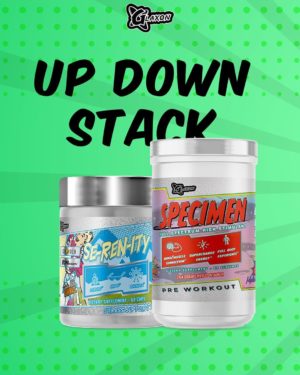 Specimen gets you going and Serenity brings you back down.

They were the first company to introduce MitoBurn to the supplement industry, a cutting edge ingredient from NNB that boasts some potent health benefits, most notably involving fat loss. This is one of the reasons Thermal, Glaxon’s stimulant-free fat burner, quickly became a bestseller!

Although it seems like there’s not much room for innovation within the stimulant-free pre-workout category, Glaxon is disproving that misconception with Plasm Surge V2. What’s even crazier is that Glaxon is not even a year old yet. But since their team is full of industry veterans with strong connections, they’re doing unimaginable things for such a young brand.

Knowing Glaxon, this is just a warm-up for what’s to come in the future. These Goons have so many ideas, it’s hard to keep track. Fortunately for you, PricePlow will have every new product covered with a detailed article and video review. Just subscribe down below so you don’t miss out. And use coupon code PricePlow to save money on all Glaxon products!