PEScience’s High Volume stimulant-free pre workout pump supplement has been around since 2014 – long before most brands had a stim-free pre workout… hell, long before most of today’s supplement brands even existed. With large nitrate doses, the 2014 release was well ahead of its time, but it’s also been upgraded a few times along the way. This article covers the formula after those upgrades. 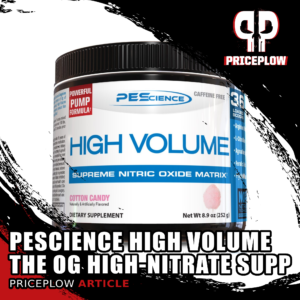 The potent pump supplement was originally brought into PEScience through their acquisition of a brand known as Athletix. Like the original version, High Volume is loaded, but has been improved a few times along the way.

The formula has long stood the test of time, with only a minor 2015 tweak to the Performance Pump Matrix, which was upgraded to include Ferula asafoetida root extract (for its ferulic acid), an ingredient we don’t see too often in pump pre workouts. We dig into the science behind ferulic acid and everything else in the tub in this article.

PEScience High Volume is a classic, always-underrated, and well-before-its-time stimulant-free pre-workout. You can read all about it below, but first sign up for PricePlow’s PEScience news so you don’t miss our latest news on the brand:

The list of flavors will be kept up to date below: 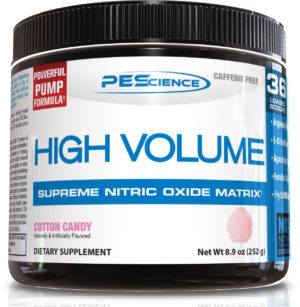 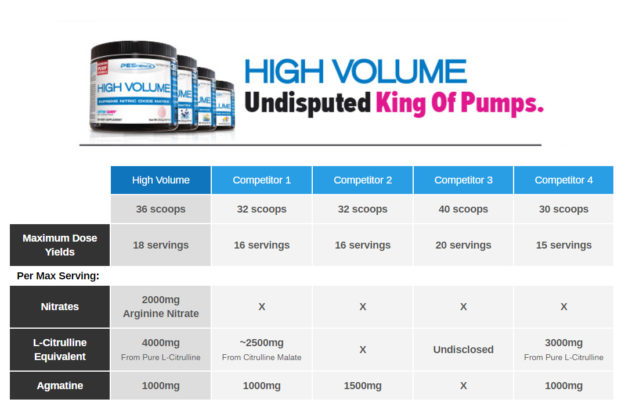 PEScience High Volume vs. the World

The OG high-nitrate pump supplement, and still a beast

With some minor tweaks here and there, High Volume is still the same great product and includes an industry-leading nitric oxide pump matrix. The addition of ferulic acid makes it unique, and we’re attempting to track down the research showing 30mg/day in weight lifters, because there seems to be something big going on here.

Whenever you see huge doses of citrulline and nitrate together, know that it was PEScience High Volume who did it first. Everyone needs to try this supplement at least once… and you’ll likely use it again after that.