A relatively new brand to arise on the scene, Black Magic Supply has been described as “the darker side of the Myoblox crew”. They entered the market with their hardcore pre workout supplement, BZRK, and have since expanded their line to muscle builders, an EAA product, a nootropic, and several others.

With the market saturated with pre workouts, it makes it difficult for newcomers to stand out, but Black Magic’s labeling and intense ingredient selection is definitely a start! To make their product shine, they have packed it full to the brim with a high-stim matrix to get yourself amped and dialed in for your workout. 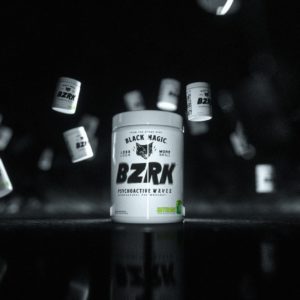 When the Money runs out, pick up the original BZRK!

…and of course, really cool labeling, coming “From the Other Side”.

We’ve got a full ingredient breakdown for you on this wild ride of a label, but before delving into this label, check out PricePlow’s coupon-driven deals, and be sure to sign up for our Black Magic Supply news alerts since this brand seems to have some cool tricks up its sleeve:

While BZRK is touted as a high-stim powerhouse of a preworkout option, it is certainly no slacker when it comes to pumps and power. With over 16 grams of active ingredients overall, this product is loaded, starting with the “Supernatural Matrix” up top.

However, the stimulant portion, known as the “Possessed Matrix,” is wrapped up in a 1,675mg proprietary blend, so we can’t tell you what sort of doses you are really getting in those ingredients. While we were given the caffeine dose (350mg), the rest are unknown to us and the consumer. We make a few educated guesses that may be close to the mark, but to be clear, they’re just guesses based on general dosing guidelines and we really don’t know.

Black Magic Supply is known for creating flavors that are as unique as their graphics and formulas. For example, BZRK comes in Crystal Blue, Peach Rings, Mango Sunrise, Haterade, Lemon Razz Icy, and Cosmic Burst! Since BZRK is their flagship product, Black Magic Supply enjoys running limited edition flavors so be on the lookout for more coming in the near future! 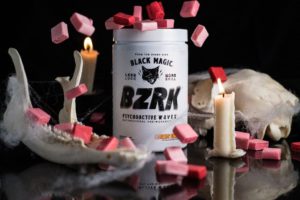 Looking For Pre Workout Unlike Any Other, Try Out BZRK!

BZRK is certainly a high stimulant choice for those looking for a real pick me up when it comes to energy, focus, and euphoria. We always look for something different, and Kola Nut and NeuroFactor were good natural additions to many of the typical players.

Yet the proprietary blend is what it is – a massive question mark. This product can be good, or it can be great. We literally cannot know without reviewing, and that review (shown above in this post) went crazy well. It’s an enjoyable-as-hell product!!

Take your training to the next level with Black Magic BZRK!

It still can be quite strong for many, even if you come in knowing the 350mg caffeine dosage. With such an intense profile, you will definitely want to use less than a scoop to start, and then assess how it feels. We find around ¾ of a scoop is certainly a more tolerable experience, while still delivering crazy energy.

Not just a stim bomb!

What’s cool is that with the citrulline, Glycerpump, and the added ergogenics, this is not just a straight stim bomb, as you can definitely expect nasty pumps, endurance, and strength increases if using it on the daily. All you need to add is creatine and your creatine/betaine combo is done.

As the first product Black Magic Supply put out, it’s definitely a good sign of things to come, but this prop blend did kick our asses in terms of guessing. Many times we can give a good guess as to what’s inside, but with this one there’s just so many possibilities, and that blend will really dictate the strength.

Only one way to find out, and that was by reviewing it, which went fantastically. We look forward to seeing the rest of the products that Black Magic Supply has out right now, as well as the new things to come.