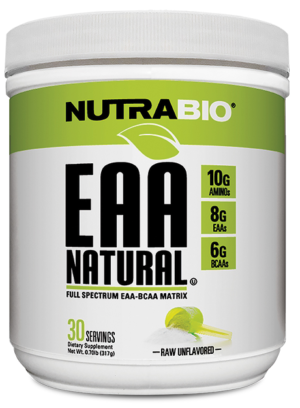 NutraBio returns to its Natural Series, soon to take on the challenge of naturally sweetening their EAA platform blend!

These two products joined NutraBio’s Natural BCAA and Grass-Fed Whey Isolate, and they’re all powered by stevia and sometimes some added monk fruit extract or cane sugar for the sports series.

Since then, Mark Glazier and the industry’s most transparent brand has been pounding the pavement with an insane amount of product releases, such as EAA Energy (which includes a new cherry limeade flavor), the new Dragon Fruit flavor systems (which now includes focus-enhancing intra workout supplement Alpha EAA), the Breakfast Series Whey Protein Isolate flavors, Curcumin Advanced, and even single-ingredient products like KSM-66 Ashwagandha and Alpha-GPC.

Back to the Natural Series: EAAs for everyone

But what about our natural friends out there? The flavored powders listed above all have sucralose. Turns out NutraBio’s been busy for you too — on top of a really cool and unique Matcha Green Tea flavor Grass-Fed Whey Isolate (where the flavor is a beneficial active ingredient!), the team wants to get more essential amino acids into your hands too!

And with that, they’re launching EAA Natural, which is starting as an unflavored, unsweetened version, but will soon have flavors as well — so sign up for our NutraBio news alerts below! After that, we’ll get into the ingredient label here: 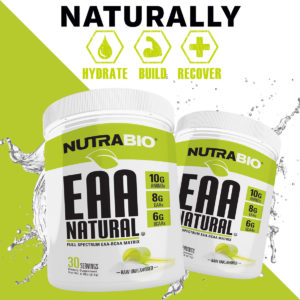 Below, you’ll see the same amino blend as EAA Pure, EAA Energy, and Alpha EAA… but with one major thing missing: Sucralose!

The long story short is that EAA Natural uses the same 10.55g base formula as Alpha EAA, EAA Energy, and EAA Pure (an in-store retailer exclusive). This is an incredible thing, because we have 8.2g of EAAs consisting of 6g BCAA, meaning there’s a large 2.2g of non-BCAA EAAs… tough for anyone to flavor, let alone without sucralose!

Sucralose-free dieters often miss out on these quality formulas, and sometimes don’t get in enough protein in general, missing out on some of the best protein powders (and oftentimes avoiding beef). This makes EAA Natural a great idea for these types of dieters, because these aminos are essential — they must be ingested via diet and/or supplementation!

Here we’ll quickly break down what each amino does:

All Day Recovery… add it to your favorite flavored beverage!

NutraBio is launching with an unflavored and unsweetened version of EAA Natural, but more flavors are to come. Below is a list of the flavors that are in stock: 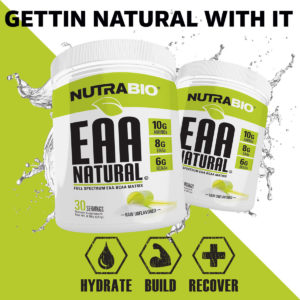 Ready to get Natural with It?

NutraBio’s been doing very much stuff, but a lot of it is sucralose-based. With this release, they show their love for their Natural Series fans, and remind them that they are not forgotten!

But further, and most important, we now see that NutraBio’s built out a platform for its essential amino acid supplements. EAA Pure and EAA Energy were similar, but they released at the same time so we thought nothing of it. Then came Alpha EAA, and we realized what they were up to. They have a blend that is an incredible formulation, and they’re becoming masters of flavoring on top of it.

So much so, apparently, that they’re ready to release this formula with natural flavoring and sweetening, something we honestly weren’t expecting with so many non-BCAA EAAs inside.