Finally, a well-dosed stevia-sweetened pre workout supplement that you can enjoy! 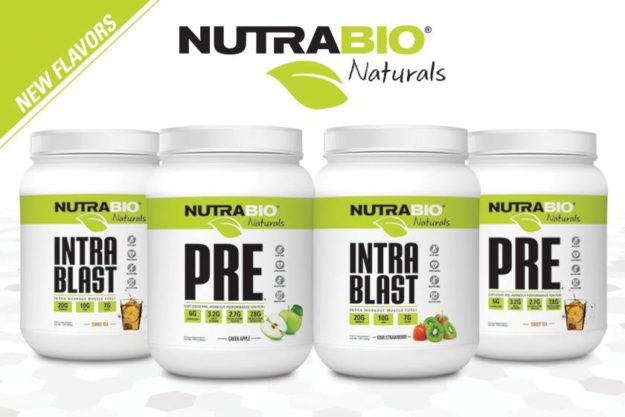 Has someone finally made a fully-loaded pre workout with stevia taste great?!

NutraBio is making massive waves in the early stages of 2018. After becoming the first major company to provide third-party lab tests of their products, the company gave us a taste of what to expect in the spring, with the upcoming launch of “True Facts” in a promise to take label transparency to a whole new level. But on the product front, the company is re-introducing the Natural Series, with two products that nobody has made taste good with just stevia – a fully-loaded pre workout and supporting intra workout supplement.

Now on to the product itself: 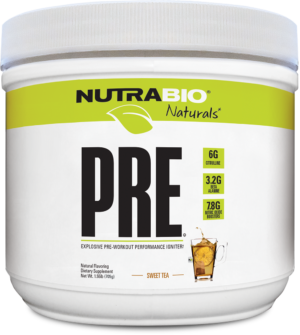 Stevia doesn’t need to have aftertaste!!

You shouldn’t have to choose between flavor and quality

It shouldn’t take supplement consumers too long to realize that NutraBio is at the top of the class in supplement integrity and quality. One of the problems consumers face is whether or not to buy an awesome-flavored proprietary blend with a heavy dose of, “what the hell am I really drinking?” or an average-tasting product with a fully disclosed formula.

With NutraBio, it’s a win-win and consumers get the best of both worlds – especially after that Blue Raspberry NutraBio Pre Workout launch!

But what if you don’t want sucralose?!

Why Is a Natural Series Important?

If you just want to see the label, skip ahead to the ingredients area. It’s basically the same epic label as NutraBio PRE Workout but with stevia instead of sucralose and purely naturally-derived sources of caffeine.

NutraBio has been well ahead of the curve when it comes to the market shift towards honest labels (as explained in The NutraBio Story), but supplement buyers have begun to consider the effects of artificial additions inside of their products, such as a artificial flavors, colors, and sweeteners. They never use fillers or excipients, nor do they use fake coloring/dyes… but they do use sucralose, and some users are getting away from it as stevia improves.

Most people know that a greasy burger with a side of fries, is likely not as nutritious for the human body compared to a meal consisting of grilled chicken, sweet potato, and green beans. Similarly, most people would probably agree that using spirulina in the blue razz flavor is a bit more beneficial than the question mark that is “Blue #1”.

Here is how the FDA defines artificial flavors and artificial sweeteners:

“The term artificial flavor or artificial flavoring means any substance, the function of which is to impart flavor, which is not derived from a spice, fruit or fruit juice, vegetable or vegetable juice, edible yeast, herb, bark, bud, root, leaf or similar plant material, meat, fish, poultry, eggs, dairy products, or fermentation products thereof.”

So, when we drink a lemonade-flavored supplement and learn that the label lists zero mentions to lemon, lemon zest, or any other natural lemon derivative, we can feel confident we are drinking something designed to taste like lemon……but it isn’t actually from a lemon.

That’s just a bit too freaky to a growing number of consumers. And that’s exactly why NutraBio launched its Natural Series – especially given that many of their own consumers are the ones who scrutinize labels so much in the first place! 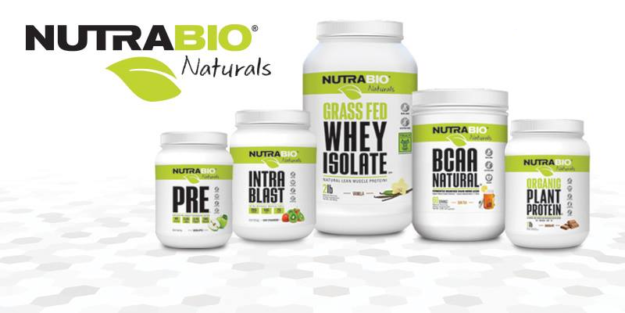 NutraBio’s Natural Series has grown (image as of March 2018), and will continue to do so! But today we focus on the PRE.

How Is The Natural Series Different?

So making a natural version will compromise the original formula, right?

Natural PRE uses Stevia as a sweetener, which is a natural sweetener up to 200 times sweeter than table sugar, but also has a bittersweetness to it that must be controlled. Stevia is a widely accepted healthy alternative to sugar with zero calories, and as it gets adopted en masse, we hope to see more research on it as well.

Now that you’re warmed up, you can take a moment to sign up for NutraBio’s coupons, price drops, and news alerts with PricePlow, then let’s get into the ingredients:

Like standard PRE, Natural Series Pre is broken down into four categories on the label:

Below is the full breakdown:

Labels like this explain why NutraBio continues to be a people’s choice company. No one should ever need to question the importance of label transparency. Why would anyone pay for something without knowing exactly what they are getting? Why is nearly nobody else providing third party lab tests? They are already legally required to get lab tests on their incoming raw materials and outgoing product, you realize?

Before companies like NutraBio, consumers had no other choice than to “trust” the companies they bought from. Those days are over. NutraBio changed the game for everyone and the momentum towards full label transparency has never been stronger. Before you had to trust, now you can trust and verify.

Natural PRE’s launch consists of two flavors: Sweet Tea and Green Apple. The Green Apple PRE V5 is a refreshing take on an apple flavor and is unlike any other company’s. It uses the perfect amount of sweetness and is equalled out by a satisfying element of sourness.

The Sweet Tea flavor may sound a bit abnormal for most pre-workout product, but who cares, this is basically a spring-time launch so we’re happy to have it!

Given NutraBio’s track record with sweet tea flavors (notably in their Intra Blast, which has EAAs and is tough to mask), it will likely be a smashing success.

Mike and CJ of PricePlow invited Ben Kane and Dan Margolis of NutraBio to join them for a fun podcast, and they started it out by taste-testing the new Green Apple Natural Series PRE and Sweet Tea flavored Natural Series Intra Blast.

See what they thought below (the video is long so we’ve pointed it to the right part, around 5:50):

However, for the fruit cocktail shake-ologists in the world, it may be difficult to add other flavored supplements with the Sweet Tea PRE. No doubt some fruit flavors will compliment a Sweet Tea flavor (Arnold Palmers anyone?), however for those who mix 4-5 fruit flavored powders into one pre-workout drink, the Green Apple may better be suited for such an approach. 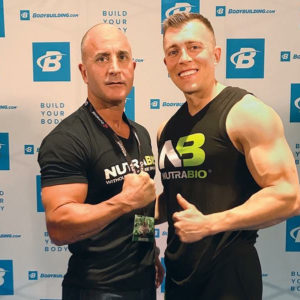 NutraBio Founder Mark Glazier alongside NutraBio athlete Zane Hadzick together at the Olympia 2017 crushing it!

NutraBio CEO Mark Glazier is a man determined to revolutionize the sports nutrition and supplementation market. He has called out global companies and believes that by giving consumers fully transparent labels, the competitors will have to follow suit. And they are!

Mark is on a mission and we all benefit from the fruit of his labor. NutraBio products have proven to be top market competitors. The company’s 100% Whey Protein Isolate won the 2016 Protein Wars and came in 2nd place in 2017. After this year’s Natural Series “PRE” and “Intra Blast” launches, it looks like they’ll get back to some new natural proteins too!

For fans of NutraBio and those wishing to elevate in-gym performance, NutraBio Natural Series PRE offers alternate options for anyone who prefers to avoid artificial coloring, sweeteners, and flavors. The standard PRE V5 is an excellent option for any lifter and NutraBio is reigning above its competitors by offering products that work better and also offering those products in a “healthier alternative”.

When we spend our hard earned money on products, why settle for anything less than full transparency and maximum effectiveness? With products like the Natural Series, NutraBio is further setting itself apart from the industry normality’s and will push the rest of the industry to keep pace.