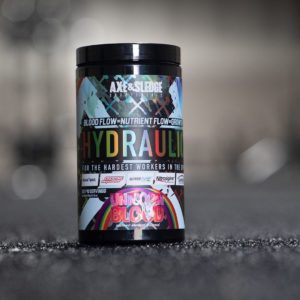 Hydraulic is one of Axe & Sledge’s best selling products and it’s a must try!

Axe & Sledge is a relatively new company, but they’re making some serious waves in the supplement industry. Ever since they started, Axe & Sledge have been running at full force, pumping out awesome products with massive dosages, open formulas, and a slew of patented, trademarked, and premium ingredients.

However, when you hear the name Axe & Sledge, that doesn’t sound like it’s related to supplements at all, let alone health and fitness. And you’re definitely, right! But what they do represent is the hardest working tools that exist, an axe and a sledge hammer.

When the four owners of Axe & Sledge came together to create this brand, that seemed to be the most fitting name, since they all came from blue-collar working backgrounds. And we all know those people are the hardest workers around. And they all agreed that Axe and Sledge was going to create supplements that could meet the demands of these hard working M’Fers and we can confidently say, they definitely do!

Axe and Sledge has released several phenomenal product over the years, but their best selling product is none other than Hydraulic. We’ve got to try it for ourselves and it definitely lives up to the hype, this product is incredibly effective. 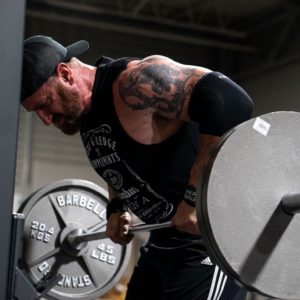 Axe & Sledge formulates supplements for people who want to take things to the next level.

Several of our readers and followers always ask what’s the best non-stim pre workout? Although there really is no “best” because everyone has different preferences, we can confidently say that Hydraulic is a must-try. And if you don’t beleive us yet, then keep reading because you’re about to find out what makes Hydraulic out-weigh its competitors.

In this post, we dive in and give an in-depth review of Seth’s stimulant-free pre workout formula, Hydraulic (originally titled Fuel Pump but later changed). As expected with Axe & Sledge, we have a mountain of well-dosed, patented / trademarked ergogenic and ingredients in an open-formula. The kicker is that there’s not too much sweetener, so you can actually taste the flavor system and let the drink build as it helps you build.

This is the brand built for the hardest-working athletes in the gym (like Seth himself)… and this is the product for you hard workers to get the most pump and strength out of their training.

Before we get into the meat and potatoes, be sure to check our coupon-driven deals here, and sign up for our Axe & Sledge alerts to stay up to date with this awesome brand:

Check Out Ben’s Ingredient Explanation and Mike’s Review of Hydraulic!

Note: Doses listed below are based on one full serving (i.e. two scoops, or “Extreme Pumps” per the label). Hydraulic is a 40/20 serving product meaning that a full serving is technically two scoops.

Below is an up-to-date list of all Hydraulic flavors and their coupon-powered prices on PricePlow:

Seth isn’t a fan of the overly sweet flavor systems, so his products use a much lower amount of sucralose than much of the competition. We love this refreshing change since it allows us to actually taste the flavor system, which gets much better near the end of drinking it down. This is a change nearly no one else is doing, so we’re happy to see Seth tackle this one.

If you need to have your nuts knocked off with sucralose, then this won’t be for you. But as of right now, there’s seriously something awesome to be said about this — at least the Scorpion Venom (mixed berry) flavor system, which we’re reviewing right now. 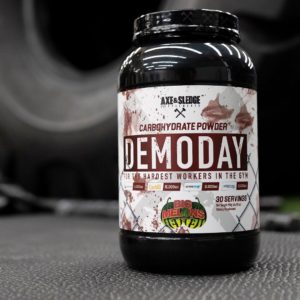 Hydraulic may be phenomenal on its own, however if you’re looking to get an even bigger pump and boost in performance, then we highly recommend paring Hydraulic with Demo Day!

And if you’re looking for some stims to add alongside Hydraulic, then look no further than either Ignition Switch or Seventh Gear to get you up and running on full speed!

Final Thoughts: Hydraulic Is One Of A Kind

With five patented ingredients, and a killer profile for pump, Hydraulic seems to be a top tier option for those looking for non-stimulant formulas. Clearly this product is living up to Pumpmaster Seth’s belief that blood flow = nutrient flow = growth, since we are hitting citrulline, glycerol, taurine, agmatine, and Nitrosigine. Expect some absolutely wicked pumps with this killer formula. 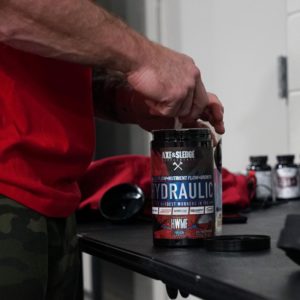 Axe and Sledge Hydraulic gives you skin splitting pumps and laser focus, without any stimulants!

But besides being awesome for pumps, the addition of the mood boosting tyrosines and ergogenic aids like creatine and beta alanine make this a well rounded product, not just a one trick pony. We’re always down for something different, and here we’re getting it in the form of tons of trademarked / patented ingredients, added ergogenics, vitamins, minerals, and a refreshing take on flavor.

Axe & Sledge has some big things planned for the future and although we can’t share all details yet, you can be the first to know by subscribing down below. After trying some of their products, we’ve been extremely impressed with everything Axe & Sledge has released. It’s hard to explain what makes Axe & Sledge stand out, but after you try their supplements, it’s not hard to tell that they put their hearts and souls into every aspect of the brand.