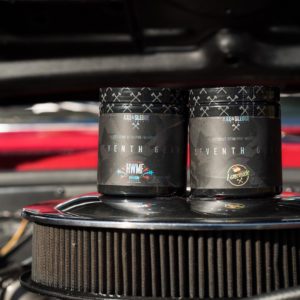 Warning; Seventh Gear will take you for a ride, so be prepared!

If there’s one thing Axe & Sledge is known for, it has to be creating phenomenal supplements for the hardest workers in the gym. They’ve built their reputation based on setting high quality standards and giving you products that really deliver results, regardless of the cost. Their team — and especially their co-founder Seth Feroce — work just as hard as you do day in and day out. Whether that’s in the office, at home, or in the gym, if they represent Axe & Sledge, you know they’re giving it all they have.

In regards to health and fitness, we all want to be successful and reach our goals, but in order to be the very best — well, that requires an “extra gear” you can shift into from time to time. If you’re just starting out, then soak in all the newbie gains, because you can just look at the weights and watch your physique change. But soon enough, you’ll reach a point where you need to give it everything you’ve got to progress.

Of course, diet, training, hydration, and sleep must be dialed in in order to fuel muscle growth and strength gains. But this is also the point where proper supplementation can give you that extra boost, when you need it most.

How about we get that “extra gear” every single workout?!

This is where a pre workout comes in. Sure, you can start with something basic, and that will get you going for a while. But when you’re ready to see what an extreme pre workout feels like, Axe & Sledge has you covered with Seventh Gear!

Seventh Gear: On a High-Speed Chase Towards Results!

Axe & Sledge formulates supplements for the hardest workers in the gym, so don’t expect to see any proprietary blends, subclinical dosages, or below-average formulas. They create products that help even the most elite athletes and competitors get more results. As you’ve racked up years of hard training and lifting under your belt, you may have experienced 4th, 5th, and even 6th gear. 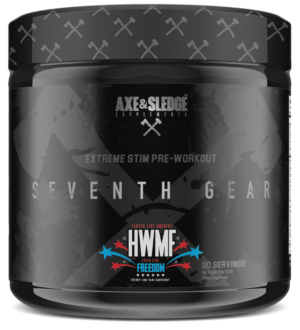 Are you ready to take your training to the next level?

But very few can handle that 7th Gear.

Seth can. And he knows you can too. That’s why Axe & Sledge offers a pre workout that kicks your training up a notch and shows you just what that Seventh Gear looks like.

A pre workout that’s not for beginners

We have to warn you, this is not a beginner’s pre workout supplement, and if you do try it, we strongly recommend starting with half a serving. In this post, we’ll reveal Seventh Gear’s formula to show you just what it’s capable of — and believe us, it’s stronger than it looks.

Axe & Sledge has some very exciting things coming out, and PricePlow will be your go-to media source for all new product and flavor releases, reviews, deals, and interviews, so make sure subscribe to our Axe & Sledge news alerts!

Seventh Gear was formulated to give you extreme energy, focus, and enhance muscular endurance. It has a high dose of stimulants that really pack a punch, and several patented ingredients to get the most out of your training session. And if you’re looking more for something to give you an extreme pump, then we suggest stacking Seventh Gear with Hydraulic. That will be one epic stack to get the best of both worlds!

Now let’s get into what makes Seventh Gear a real heavy hitter! As forewarning, an entire scoop has 387.5mg caffeine!

If there’s one guy in the health, fitness, and supplement industry that likes to enjoy his fair share of tasty treats and drinks, it’s Seth Feroce. He just makes sure to work harder in the gym to feel no guilt. And if you’ve tried any other of Axe & Sledge’s products, you know that they’re flavor masters.

Seth Feroce: Becoming The Best Requires You To Go The Extra Mile 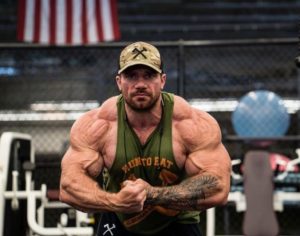 No one can outwork Seth Feroce and that’s why he’s one of the best.

Seth Feroce didn’t just reach the highest level in bodybuilding just by showing up to the gym and pumping out a few curls. He became an IFBB Pro during his first year of competing, and it wasn’t because he was the biggest guy on stage or had years of experience. He achieved such a high level of success because he never let anyone outwork him. There were several training sessions that required everything to be dialed in from nutrition and supplementation, in order to help carry him through.

But at the time, when Seth was deep into competing, he never had a pre workout like Seventh Gear to act as a secret weapon on those days he needed it most. So when Axe & Sledge came about, Seth was fully committed to giving those hard working MFer’s a pre workout that could really give them what they were looking for.

And now it can be yours.

After analyzing the formula and learning how each ingredient works on its own as well as with the others, you can see that Seventh Gear lives up to its name – there’s no shortage of energy in here! The crew over at Axe & Sledge were not messing around when they created this product, and we think it’s even stronger than what they anticipated. 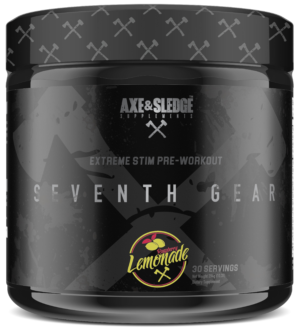 Think you can handle Seventh Gear?

By using generous dosages, ingredients backed by research, and several patented ingredients, Seventh Gear is truly on another level. That’s why if you decide to give it a shot, we strongly recommend starting with half a scoop to assess your tolerance first. And for those days you don’t need intense energy, but still want to get in an epic training session, then stacking Seventh Gear with Hydraulic is the perfect combo!

This is one of those pre workouts that you save as a secret weapon for the days (or entire training cycles) you need most. When you’re going for a new personal record, have a big competition, or you just want to kill a leg day. That’s where Seventh Gear comes in handy! For all the other days or evening sessions, you might want to use something a bit more mellow, so you don’t build up a tolerance to all the stims.

Axe & Sledge did a phenomenal job formulating this extreme pre workout and the reviews speak for themselves. Seventh Gear isn’t for everyone, but for the select few out there that really put in the work day in and day out, it’s just what they’ve been looking for! Axe & Sledge is not slowing down anytime soon, and PricePlow is proud to say we will be your main media outlet for everything they have planned! Subscribe down below to get exclusive access to Axe & Sledge giveaways, reviews, news, deals, and interviews.