Meet Impel Nutrition, a brand with a MONSTER stim-free pump supplement… and public third-party lab tests to prove it!

Impel Nutrition was founded by CEO James Hendricks back in mid-2019. After two decades of using supplements and conducting ingredient research under his belt, James was frustrated with the amount of under-dosed and misleading products on the market and decided to take matters into his own hands.

Fueled by intense grit, motivation, and an incredible work ethic (and perhaps some caffeine!), James launched Impel Nutrition. The new brand is built on the very things he believes in —- an uncompromising drive to improve and a willingness to put in the work.

Impel is a brand for people who share these beliefs, not just in the gym but in life. 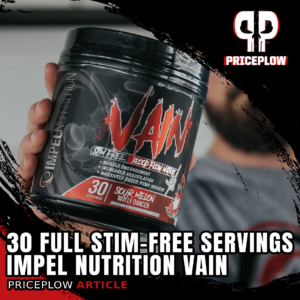 Now this is how you do stim-free pre workouts. 30 full servings, and it could be your first chance at trying FitNox!

Every Impel Nutrition product has been built with these core dogmas in mind, delivering efficacious doses of scientifically-backed ingredients that help users reach their goals. Impel offers a few different formulas, each designed for a specific purpose. Today, we highlight Vain, the brand’s potent non-stimulant pre-workout that packs some serious muscle pumps. Using multiple standardized ingredients, Vain increases blood flow to a degree that brings “freaky fullness” to your training session.

And it has 30 one-scoop servings – none of this “20 servings / 40 scoop” stuff you see on labels. We’re talking 30 big ones here – which is the first thing that caught our attention on the label.

Before we dive into the label, make sure you’re subscribed to PricePlow for the latest supplement deals, news, reviews, and interviews. Also, don’t forget to check out our social media feeds — we’re most active on Instagram and YouTube — for additional content!

Each container of Vain contains 30 one-scoop servings, where one serving consists of the following:

Vain is third-party tested, too!

This is a brand you have to support. Showing a public lab 3rd party test – and they are not cheap.

Impel actually gets two separate tests for Vain. They conducted one for raw ingredients and another for the entire formula. While the law states brands must do this regardless, it does not state that they have to be posted publicly. Hendricks and team Impel go above and beyond, and want to guarantee the quality of each individual component that goes into a tub of Vain first, validating that what they’ve received from suppliers meets their demands.

After combining all the ingredients, the entire formula is tested in-whole, confirming that what’s stated on the label is verifiably contained in the tub.

As the saying goes, “Garbage in, garbage out.” Impel Nutrition takes the necessary steps to guarantee that any product bearing its name is garbage-free, fully efficacious, and transparent. This level of quality assurance is something we see from top brands in the industry. By using third-party lab testing, Impel clearly has its sights set on joining those ranks.

You can find some of these lab results on ImpelNutrition.com.

Here’s an updated list of all Vain flavors you can get your hands on:

Impel Nutrition was founded in 2019 for those who don’t just see sports supplements as a means of getting more out of an occasional workout. Impel makes products that help committed individuals looking to “fan their internal flame”, those who truly value their health and fitness and its impact on the rest of their life. Like CEO James Hendricks, Impel Nutrition is for people who take a no-compromise approach to hard work, family, and life. 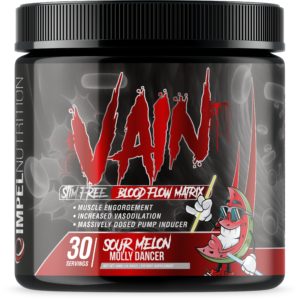 Vain, Impel’s pump pre-workout, relies on the brand’s ethos to introduce serious vascularity into your workout. This product uses a few of the industry’s top NO-producing ingredients, in addition to a highly-stable glycerol variant that moves water through the body, too. Importantly, Vain is stimulant-free, making it a great option for anyone who’s backing off stimulants a bit, those who train late at night, or users who just want some sick pumps.

Vain has one goal: vascularity. And each ingredient on the label serves a specific role in attaining that goal. Impel’s Vain helps drive you toward enhanced muscle pumps and superior workouts. If you want a serious 30 serving tub, Vain is for you. If you want to try FitNox, Vain is also for you. Now all you have to do is get behind the wheel!