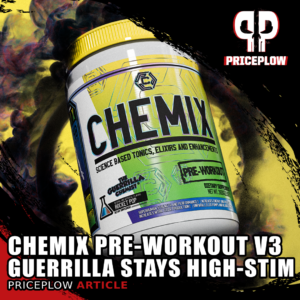 Chemix Pre-Workout V3 is out, first launched in Rocket Pop flavor! Check out this new formula!

The Guerilla Chemist has been formulating supplements while providing amazing free content for a long time. On his titular Instagram, he often discusses chemical compounds, info on interesting products, and other aspects of supplementation that fly over everyone else’s heads. His attention to detail led many to demand his own line of products — and with Chemix, he did just that. It all began with the Chemix Pre Workout, and today we’re excited to share its third revision.

TGC brings the mood and cognition support in a major way

Chemix, at its heart, is an edgy and aggressive brand, so it’s no surprise to see a high-stimulant pre-workout. The serving size is serious with a confirmed 350 milligrams of total caffeine, but as opposed to the original version, it now has energy alongside plenty of nitric oxide and ergogenic support!

The formula is like a gathering of unique ingredients for those who closely follow the industry. Guerilla threw in some mood-boosting bonuses like Kanna (an ingredient he clearly loves) and keeps the mushroom support inside that we’ll discuss in this article.

We have the full story below, but before you do that, check PricePlow’s coupon-powered prices and sign up for our Chemix news alerts because we’re expecting a lot more from TGC and the brand:

Note: Check retailers to make sure you’re getting the version you want. The new V3 was first launched in Rocket Pop flavor in April 2022 on the Chemix website.

The following is what you get in a one scoop serving — but note that there are 40 scoops per serving, and the label has a 2 scoop section, so this one can be two-scooped by the most experienced users after assessing a single scoop (realize we have 175 milligrams total caffeine per scoop):

Chemix’s Pre-Workout is available in the following flavors, although note that Rocket Pop is first flavor launched for V3:

Stacking: Looking at you, nitric oxide 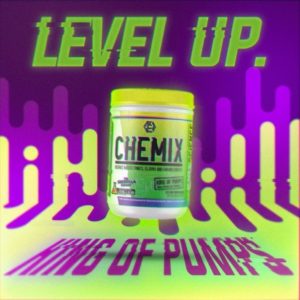 Ready to level up? Chemix King of Pumps will get you there, with a huge dose of betaine

The original Chemix Pre-Workout contained no nitric oxide boosters, but that’s no longer the case. Still, if you only want to take one scoop, or you want to blow your muscles up, stacking with Chemix King of Pumps is the way to go. At that point, you’ll have a mind-blowing amount of citrulline, betaine, and far more goodies from The Guerrilla Chemist.

Well damn. Everyone’s been waiting for a new pre workout from the mind of Guerrilla Chemist, and this is it. A major mood, energy, and brain booster, with an impressive batch of energetics alongside.

Chemix is one of the most interesting pre-workouts we’ve seen yet, but the dosing of two ingredients — isopropylnorsynephrine and alpha yohimbine — will be make-it-or-break it when reviewing. This is why the prop blend throws us off… and now there’s only one way to find out – by taking a scoop down!

There’s a lot of synergy between ingredients on this label, and we’re happy to see citrulline and betaine have joined the fold since the original version. Chemix is the best example of The Guerrilla Chemist unrestrained and we’re extremely excited for what he drops every single time.

Aggressive high-stimulant lifters that don’t compete in WADA-tested sports, don’t suffer from anxiety, and love the “up” feeling of stimulants are free to give this a shot, but just like everything else from Chemix… it’s not for rookies. If you don’t feel this one even at a single scoop, we’re not sure what to tell you, because this may even awaken the dead with its powers.

Note: Check retailers to make sure you’re getting the version you want. The new V3 was first launched in Rocket Pop flavor in April 2022 on the Chemix website.