Core Nutritionals has teamed up with Paul Revelia, owner and head coach of ProPhysique, to create an exclusive line of supplements called the PR Series. So far, the line includes Core Vegan, Burn Powder, and their most recent release, Core POISE.

Over the years, Revelia has worked with hundreds of female competitors who push their bodies to the limit in an attempt to showcase to audiences the most aesthetically pleasing physique. 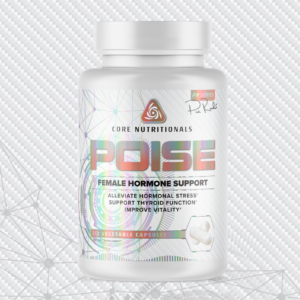 Although Revelia prioritizes clients’ health and well-being above all else, getting to a minimal level of body fat required for physique sports inevitably takes its toll. He acknowledges two primary things his female clients struggle with are maintaining optimal thyroid and hormone health, which is where the concept for POISE came about.

POISE is formulated to optimize female health and performance by:

Some of the main ingredients POISE uses to achieve positive effects are:

Keep reading to learn more about POISE and subscribe below to get notifications when Core has a sale or releases new products and flavors. Our coupon-powered deals are below:

For optimal results, Core recommends taking four capsules of POISE per day, preferably with food. If desired, you can split the dose: take two capsules in the morning and two in the evening.

A key takeaway is that POISE works through multiple pathways, but isn’t just a collection of single ingredients functioning alone – there are synergies between the ingredients. For instance, when adding progesterone (stimulatory on the thyroid) plus the substrate of iodine (which too many are deficient in lately), you get a “total is the greater than the sum of the parts” effect.

Here’s what one serving (four capsules) of Core POISE contains:

Paul Revelia: The Coach Behind the PR Series

Not only is Revelia the owner and head coach at ProPhysique, but he’s also a Core elite athlete and natural professional bodybuilder. For years, Revelia has been using Core Nutritionals for all his supplement needs. He’s also close friends with Doug Miller, Core CEO. Throughout Revelia’s coaching career, he recommended Core supplements to his trainees, which eventually led to the creation of the PR Series. 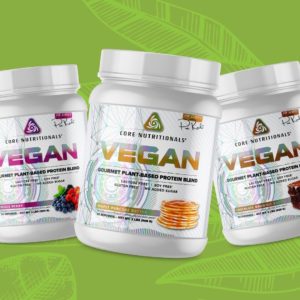 So far the series includes:

You may be wondering why these products are included in the PR Series? Since Revelia has a dairy allergy, he’s limited by the types of protein powders he can consume, including many in Core’s inventory, such as PRO, POST, or ISO. So he convinced Doug to work together to create a high-quality vegan protein powder, which he not only takes himself but also recommends to his clients on a plant-based diet.

Burn Powder was added to the PR Series because Revelia coaches mainly contest-prep clients who have to attain very low body fat percentages to be presentable on stage. So Burn Powder helps make fat loss just a bit easier. Lastly, POISE is specifically for females who struggle with hormonal imbalance and thyroid issues, which physique competitors are prone to.

We expect that Core will continue to expand the PR Series throughout 2021, so be on the lookout for more supplements coming soon!