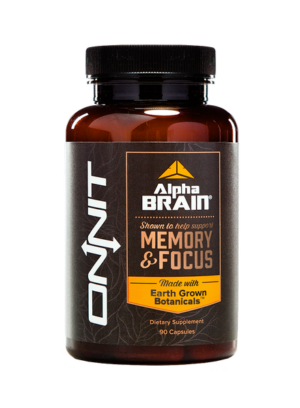 Onnit Alpha Brain is an incredibly popular nootropic touted by celebrities around the world, but is it really just an over-hyped, overpriced product?

Onnit is one of the most recognized brands in fitness, due to its growth among the CrossFit, Paleo, and holistic fitness crowds, and sponsorship from some heavy hitters like Joe Rogan, Gary Vaynerchuk, Bode Miller, NHL star Jonathan Toews, and more. The brand has launched numerous products to optimize human health and function over the years, but today, we’re zeroing in on one of their most well-known products touted to improve your mental gains.

Alpha Brain is the brand’s incredibly popular nootropic and brain health formula designed to enhance all aspects of memory, cognition, and mental performance.

Before we get to the breakdown, take a moment to check the best deal and sign up for alerts from PricePlow:

When looking at the Alpha Brain supplement facts panel, it has all the making of a great brain-boosting formula, until you realize they’re all hidden in prop blends and appear to be quite underdosed….

Note: the following doses are for two capsules of Alpha Brain:

For enhanced mental performance: Consume 2 capsules in the morning or early afternoon, preferably with a meal.

For “enhanced dream state”: Consume 2 capsules 4-6 hours prior to sleep.

Onnit advises to not consume more than 3 capsules in any 24 hour period.

The Value Proposition: Is this worth it?

There’s a convenience factor to taking two Alpha Brain’s and being done with it, but the point here is that this is a starter nootropic. Nothing more.

Let’s be honest here. At one or even two capsules, this is not a very strong nootropic supplement.

So let’s see how much it’d cost to put together Alpha Brain using off-the-shelf ingredients!

Building our own Alpha Brain

Next, we need to do our best to guess what these proprietary blends consist of. This is where the most error will be introduced, so feel free to chime in on the comments below – we’re sure it’ll be close enough for value estimations though:

The amount to buy areas were calculated by multiplying the dose by 45, since there’s 45 servings per container. Now let’s find some off-the-shelf ingredients (all prices are as of June 23, 2017 using PricePlow):

You may have also noticed two important things:

You’d literally have to spend $130 with ONNIT to compete with the package we put together above.

So is Alpha Brain worth it?

Is Alpha Brain worth it? Maybe for a once off

There’s a convenience factor to taking two Alpha Brain’s and being done with it, but the point here is that this is a starter nootropic. Nothing more.

Once you realize that you love those 300mg Alpha GPC tablets (which are easily the most expensive thing in our “homemade Alpha Brain”), you won’t want to go back to whatever pixie-dusted dosage ONNIT put in.

Given that we can buy more and better-dosed off-the-shelf ingredients for the same price as Alpha Brain, we have to believe that Onnit is spending too much money paying guys like Joe Rogan (as much as we love him) and not enough offering value to their consumers.

It’s good to try once, but if you realize you’re into these focus enhancers — known as nootropics — it’s time to start looking elsewhere or build your own with actual efficacious doses.

Alpha Brain could simply be better. Yes, it contains ingredients to preserve, enhance, and prolong brain activity. But due to the fact that nearly the entire product is composed of proprietary blends, and most of it appears to be severely underdosed, we are extremely skeptical and a bit down on this popular product for anyone who’s really into this stuff.

It’s a lot to ask someone to spend $66 when you could probably just buy the Alpha-GPC and L-Tyrosine bottles up above for a third of the price and do just as well, if not better due to real dosing.

However, if you’re new to this kind of thing, go ahead and spend the money. And when you realize that you like the effects but need more capsules to really feel it, you can always come on back to this page and start tinkering on your own.