THE Eddie Hall Pre-Workout: A Carb-Enhanced Collab with Myprotein

Wanna be the World’s Strongest Man?

Pay attention: Myprotein is giving you your long-awaited shot at greatness with this special pre-workout formula developed in conjunction with Eddie Hall, the 2017 winner of the World’s Strongest Man competition. 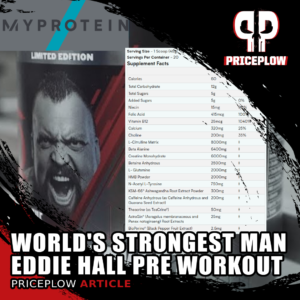 What are your thoughts on this first run of Myprotein’s THE Pre Workout with EDDIE HALL? Because it sold out quick and we want them to make more!

We’ve seen some awesome products come out of Eddie’s collaboration with Myprotein already, such as the ALL-IN-ONE complete recovery protein, which went above and beyond run-of-the-mill protein powder supplements by adding carbs in the correct ratio to protein, as well as blend of three different proteins in order to support every aspect of the post-workout recovery. You can read our review of it here: Eddie Hall Joins MyProtein for The ALL-IN-ONE Protein.

A Bold new Product in Myprotein’s THE Pre Workout Line

Before Eddie Hall came on board, Myprotein actually released a version of THE Pre-Workout that had a simpler formula, but we’re excited for the updated version, because we think the new additions will go a long way towards supporter the end user’s athletic and aesthetic goals. For comparison, check out our review of THE 1.0 in our article titled Myprotein THE Pre-Workout: A Boost When You Need it Most and even compare it to Myprotein The Pre Workout Plus, which this also takes to another level.

Now let’s take a look at what’s in the new formula. We’ll see a new ingredient, plus a big increase in dose for the others.

In a single 45-gram scoop of THE Pre-Workout Eddie Hall from Myprotein, you get the following:

Eddie Hall Pre-Workout from Myprotein is an unusually awesome pre-workout formula: not because all of these ingredients have similar mechanisms of action, but just because they are all individually awesome and because we have carbs – and Eddie’s beautiful face on the tub. Every single main ingredient in this pre-workout stack has tons of evidence supporting its efficacy and safety. And taken as a whole, this pre workout supports pretty much every major aspect of exercise and recovery.

Eddie Hall and Myprotein are a perfect match!

With the addition of HMB powder and a big across-the-board increase in the dosing of the other ingredients, we can confidently recommend this new-and-improved version of THE Pre-Workout, developed by Myprotein in collaboration with Eddie Hall.