On December 13th, 2021, CORE Nutritionals began their 12 Days of Crushmas, with a daily deal or promotion leading up to Christmas! For the first day of Crushmas, they’re kicking it off in a wild way with the incredibly unique Vanilla Core GREENS flavor!

Most of us agree that eating fruits and vegetables is essential for optimal human health. Although all of the essential vitamins and minerals can be found in animal products, the phytochemicals unique to plant foods have considerable anti-inflammatory, pro-detoxification, and hormone-balancing effects, among many other benefits. 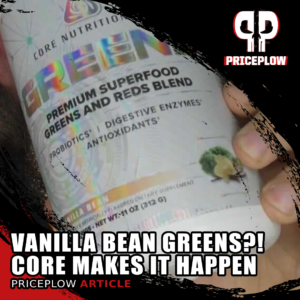 VANILLA flavored Greens?! You better believe it! We dive into this incredible formula that kicked off CORE’s 12 Days of Crushmas in 2021!

Greens powder? Yuck! Until now, that is…

The only problem with greens powder supplements? They usually taste… rather green. Which is especially insulting to many of us steak-and-egg connoisseurs.

The standard greens powder taste can discourage people from taking them on their own on a daily basis. Even if you mix it with something else, say milk and whey protein powder, maybe a couple of raw eggs, the sharp astringent flavor of the greens will absolutely dominate. Doug Miller and his team at CORE Nutritionals found a wild way around that:

Core Nutritionals has a solution: one of the world’s first vanilla-flavored greens powders! A tall order, but they pulled it off: you will love mixing this greens powder into your smoothies, or just taking it with plain water. If you like mixing these products with vanilla protein powder, you’ll also love it.

It’s now live, so take a look at the prices and other flavors available, and then let’s get into the ingredients:

OK, so you’re convinced, it’s delicious — what’s the benefit of taking it? Let’s take a look:

In a single 11 gram scoop of Core GREENS from Core Nutritionals, you get the following: 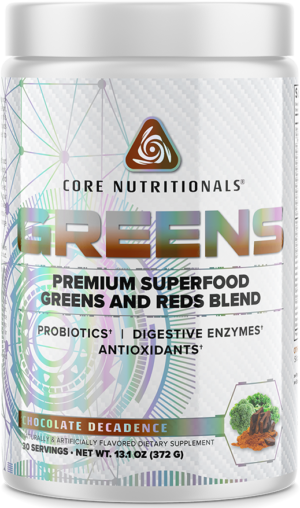 Vanilla shouldn’t surprise those who already knew about the Chocolate Decadence Greens flavor!!

Vanilla greens not sounding like your deal? Not a problem, there are some other incredible flavors offered, including another unique one in chocolate decadence:

When you were growing up, how many times did your mother scold you for not eating your vegetables? Hundreds? Thousands? Millions? OK, probably not millions, but still…

Multiple servings of fruits and vegetables? Who has time for that?!

The issue is that preparing fruits and vegetables in a tasty way can take a lot of work, and more importantly time — time spent washing, chopping, peeling, boiling, sauteing, or simmering.

Who has that kind of time? Well, many of us probably do at least sometimes. 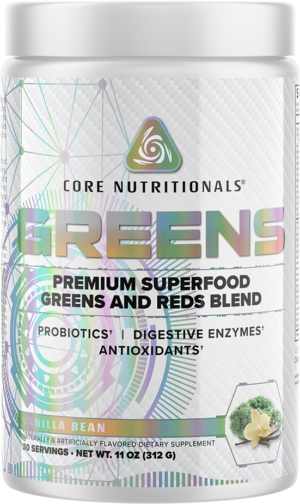 But for the other times, when we’re simply in too much of a rush to be bothered with all that prep and cooking, powdered greens supplements can step in to fill the nutritional gap created by our fast-paced lifestyles and busy schedules.

That’s where the Greens supplements from CORE Nutritionals come in — formulated to provide your body with a high degree of phytochemical, vitamin and mineral support that can be had as easily as mixing the powder with water.

Core Greens fulfills its core purpose: not only is it jam-packed with therapeutic phytochemicals and bioavailable vitamins, it also tastes great and you’ll genuinely look forward to mixing it with the beverage of your choice. Start the day off right and make yourself a whey protein shake with Core Nutritionals Vanilla Greens for breakfast.

This is how CORE kicked off the “12 Days of Crushmas” for 2021, and we have to say, they’re off to a very cool start. You’ll need to stay tuned to our CORE Nutritionals news below for more information as it comes, and be sure to follow them on Instagram to see their latest and greatest!