Nutrex Research as been around since 2001, and they continue to put out innovative, effective products!

Nutrex Research has made some major changes the past few months, and with the launch of the Warrior Series, we’re continuing to cover their powerful product lineup! We recently broke down the new NIOX label (it’s a a non-stim pump formula) as well as Alpha-T (a clinically-dosed natural testosterone booster).

The Warrior Series features several new products, with the most notable one being Warrior Pre Workout, but it also brought in some supplements from Nutrex that were either reformulated or just updated with the new look, such as Vitadapt Complete, Alpha Pump, and EAA+ Hydration. In this article we’re focusing on Outlift AMPED and its brand new flavor – Cola Soda!

If you’re a Nutrex Warrior, then chances are Outlift is one of your top pre workouts. There are a few variations of Outlift that cater to different people and experience levels. Nutrex offers the original Outlift, which contains clinically-studied ingredients at generous dosages, and then there’s Outlift Natural, which has the same formula but doesn’t use any artificial colors, flavors, or sweeteners.

But don’t forget about the Amped version! 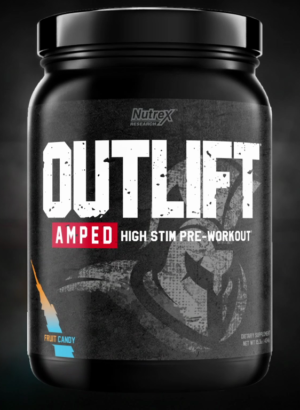 OutLift Amped is not a new product, but it does have a brand new look!

Finally we have OutLift Amped – a pre workout that kicks things up a notch with 350mg of caffeine from two different sources, 50mg of TeaCrine, and 1.5mg of alpha-yohimbine. Nutrex Research said the Warrior Series was developed for the more advanced and serious consumer, so it’s only right to have a high-stim powerhouse included in the lineup!

The new look also further helps consumers differentiate between standard Outlift and Outlift Amped. Although Nutrex added OutLift Amped to the Warrior Series and redesigned the label, it still has the same formula that we all know and love – not to mention, it now comes in an interesting new flavor – Cola Soda – which we’re most excited about!

A cola soda pre workout flavor?! We’ve got to try this…

Nutrex is known for producing some delicious and refreshing flavors and if they can pull off this one, it will be quite an impressive feat. Keep reading for our full review of Outlift Amped’s formula and our thoughts on Cola Soda. As always, If you want to get insane prices on incredible products from Nutrex Research, then make sure to sign up for their news and deal alerts!

Nutrex Research formulated Outlift Amped to give you maximum performance, high-stim energy, unparalleled strength, intense pumps, and laser focus! This is a comprehensive pre workout supplement that has everything you need to crush a grueling workout. Outlift Amped will help you push beyond your limits and show you what a properly formulated pre workout is made of.

With over 10 ingredients, a fullly disclosed label, clinically proven dosages, and great tasting flavors, we can almost guarantee that OutLift Amped will be one of your top pre workouts, so let’s see what each ingredient can do!

Here’s what one scoop (21.9g) of Outlift Amped delivers:

Check Out This Video For An Overview Of Outlift Amped

Nutrex is known for their unique and delicious flavors and with the launch of the Warrior Series – they went all out. Before the rebrand, Outlift Amped came in Cosmic Blast and Fruit Candy, but now it’s also available in Cola Soda! It will be interesting to see how well they pull off the classic soda flavor in a pre workout because there are very few companies that have been able to do it!

In the “other ingredients” section of Outlift Amped’s label it does say sodium bicarbonate, which may give it a more carbonated effect. Either way, we’re confident that the flavors will be refreshing and delicious regardless of which one you go with!

Here’s an updated list of all Outlift Amped flavor variations: 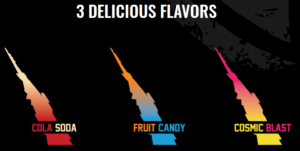 Cola Soda is the newest addition to the Outlift Amped lineup!

Crush Every Workout With Outlift Amped

OutLift Amped is not for the faint hearted – it’s definitely geared towards the more advanced lifter and/or competitor. But if you’re looking for something to take your training to the next level, this will definitely do it for you! Nutrex Research was able to take their original Outlift formula which is already stacked, and turn the dial up to 11 to give you even more energy! 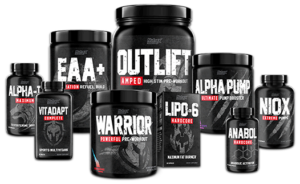 One thing we highly appreciate about Nutrex is that they make very solid products for and offer them at a fraction of the price. That just shows you they’re not out here to make a ton of money by selling you underdosed products at a high cost. Nutrex has become a leader in this industry and started way back in 2001 – they’re in it for the long haul and want nothing more than to provide the best supplements for their customers.

The Warrior Series was a major project for them to undertake, but so far, it’s been getting amazing feedback. If you’re on the market for a new pre workout and supplement brand, we highly recommend Nutrex Research – you’ll definitely get the most bang for your buck with them. Lastly, if you want to save even more money and know when new products and flavors release from Nutrex, subscribe down below!