The dragon represents a mythical creature that’s strong, powerful, and nearly unstoppable. It’s also a symbol of good luck, vitality, and inspiration. But how does a dragon relate to supplements, health, or fitness?

Who is Dragon Pharma?

When the team behind Dragon Pharma was deciding their company’s name, a dragon was the most powerful thing that came to mind. It seamlessly encompassed what they were trying to achieve with their product line. Dragon Pharma wanted to design supplements to make you feel stronger, faster, powerful, and more confident.

But instead of following the same boring industry trends, Dragon Pharma took on a different and more challenging path. They were sick of seeing underdosed formulas, with false marketing claims, and products that never truly delivered results. Dragon Pharma sponsors some of the most elite athletes in the fitness industry and formulate their products for the more “serious” gym junkie. They’ve reached success by taking the path less-traveled by, working extremely hard, and never taking shortcuts. Needless to say, it really paid off and their products are a perfect example of that.

Especially given their formulator: 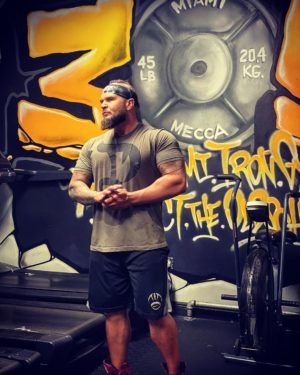 The Vanilla Gorilla in his natural habitat.

Behind any great supplement company, there’s a formulator doing countless hours of research, experimentation, and testing to create supplements that outperform the competitors. Oftentimes you never know who that formulator is, since most decide to stay behind the scenes, and would rather spend time in the lab than on Instagram. However, others realize the value of educating consumers on the method behind the formulas they come up with.

One of the most popular formulators in the industry is Drew Peters, also known as the “Vanilla Gorilla”. Drew is a great example of a person who works both behind the curtain and in front of the consumer to create some of the most advanced formulas to hit the market. On top of his lab work, he regularly appears on several social media platforms, such as podcasts and IGTV to offer more educational content involving supplements, nutrition, and training. 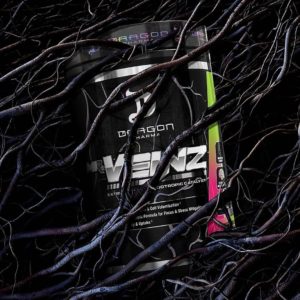 Drew has earned the title of Dragon Pharma’s Director of Scientific Affairs, which means he’s the mad formulator behind several of Dragon Pharma’s products. He’s able to use his experience and education to create some epic formulas. One of his most recent creations is Mr. Veinz, a non-stim pump and focus product that’s fueled by several trademarked and patent ingredients, such as Nitrosigine from Nutrition21. Mr. Veinz really showcased just how powerful a non-stim pre workout can be.

In this post, we’re going to reveal the formula, discuss the science behind each ingredient, and explain all the benefits Mr. Veinz delivers! No one likes killing a workout more than the Vanilla Gorilla, so you know this product is going to be exceptional. Drew is always working hard in the lab to create new products, flavors, and formulas, so make sure to sign up for Dragon Pharma news and deal alerts to follow along! 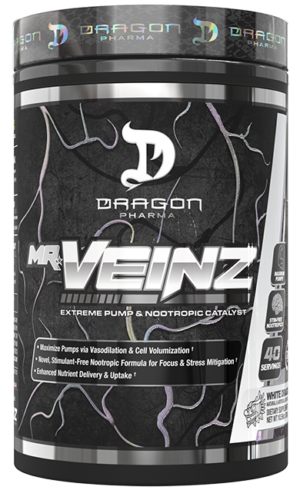 Mr. Veinz was formulated to deliver massive pumps, enhanced nutrient delivery, and razor-sharp focus. To some, the pump is one of the most sought after things in the gym, you can literally feel your muscles getting bigger.

One of the best ways you can achieve skin splitting pumps is by being hydrated, eating some carbs pre training, getting adequate sodium, and using a pre workout that contains ingredients shown to increase blood flow. With that combination, extreme pumps are nearly guaranteed!

Therefore, Mr. Veinz utilizes three key ingredients to induce maximal vasodilation: Nitrosigine, HydroMax, and S7. In addition to that, having improved mind-muscle connection can further enhance your pump and workout performance, which is exactly why Mr. Veinz also has a hefty dose of nootropics.

As you can tell, this product is fully loaded for an epic workout without any stims! Dragon Pharma breaks up the ingredient label into two main categories: Osmoregulation Pump & Nutrient Uptake Matrix and Stim-Free Cognitive Elevation & Focus Matrix. Thus, we will follow that same set up for this ingredient analysis to keep things consistent.

Now, let’s see what one serving (7.8g) of Mr. Veinz contains to deliver these insane effects:

Creating outstanding formulas is not the only thing Drew Peters is known for — he also knows how to create amazing flavors. The new rendition of Mr. Veinz may have just been released, but Dragon Pharma is quickly expanding the line up with never before seen flavors.

The most recent addition to Mr. Veinz was White Dragon, and it’s a bit of a mystery, so that’s definitely one you need to try out for yourself, because we’ve heard it’s unlike anything else on the market. But, if you’re looking for a more tried-and-true flavor, then you cannot go wrong with Strawberry Candy, that one blew us away! 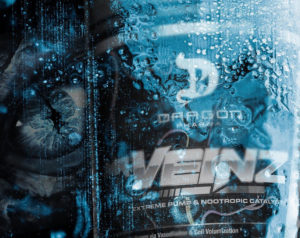 Dragon Pharma White Dragon is the latest addition to the line up!

Cutting edge ingredients, transparent labels, and efficacious dosages are the key things we look for in virtually every supplement and Mr. Veinz has all those categories covered. Don’t let the serving size fool you, because each gram packs a pump-inducing and enhanced focus punch. It’s great to see key players in the supplement industry like Drew Peters stepping forward to educate consumers on the processes, research, testing, and methods that go into making an end product. Because there are several steps that need to take place before being able to actually sell a supplement to consumers. 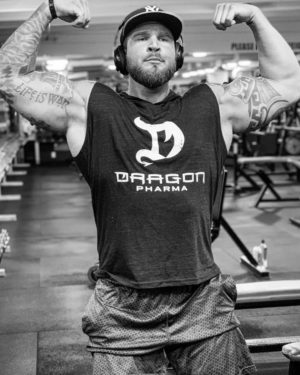 Drew Peters is either crushing it in the lab or hitting the weights!

At the end of the day, the Vanilla Gorilla and the whole Dragon Pharma Team want exactly what you do: unique, effective, and experiential products with no B.S. It seems simple and you would think that’s what everyone in the sports supplement industry wants, but not everyone can formulate so uniquely. Fortunately, there are people, companies, and platforms that rise above and truly put out great information and products based on what the research says. It’s easy to combine a few ingredients together at random dosage and hope it works. But the time, resources, and money that it takes to make an effective supplement, is well worth it the cost.

At times the industry can seem as if it’s saturated with all the same boring stuff, but there are a few people who are pushing the boundaries and creating products that truly stand out. That’s why PricePlow is always looking for those supplements to highlight here on the blog, our YouTube channel, and on social media. Dragon Pharma has some big things planned for the future, and with Drew Peters leading the way, we know it’s going to be epic. Stay tuned for more product breakdowns, reviews, interviews, and deals from Dragon Pharma!