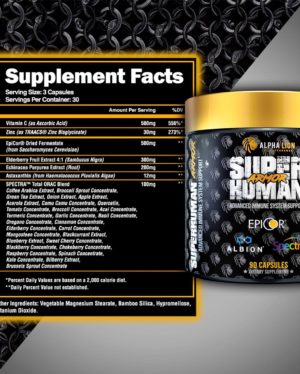 SuperHuman Armor was specifically formulated to arm your immune system to prepare for battle!

Alpha Lion is known for making supplements that really stand out, especially in categories that are saturated with competition. From the formulas, flavors, and names to the packaging and manufacturing, they make sure every stone is left unturned before launching a product with their logo on it. While everyone else is bringing the “same old”, Alpha Lion delivers unique supplements that actually deliver results.

Not just a brand making pre workouts and fat burners!

Most people know Alpha Lion from their high-octane SuperHuman pre workout series, which features The SuperHuman Pre Workout, SuperHuman Supreme, and their most recent addition, SuperHuman Burn. These supplements are geared towards boosting your performance in the gym, and they do that job fantastically.

But what about overall health? After all, you can’t crush a workout if you’re not healthy enough to show up day in, day out with your armor on!

Alpha Lion quickly realized that in order to truly be superhuman, you need to be more than just a beast in the gym. The SuperHuman pre workouts sure make you feel that way for 3-4 hours, but what about the other 20 hours in the day? 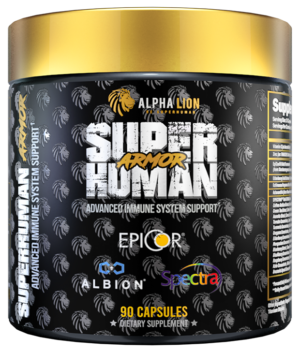 SuperHuman Armor is fully loaded to strengthen your immune system!

In our attempts to achieve SuperHuman status, we put additional stress on our systems. The body can only handle so much of it, and few people realize that high stress levels wreak havoc on your immune system’s ability to fight off foreign invaders such as bacteria or viruses. If there are two things that can cut your athletic career short, it’s illness or injury. Even if your immune system is strong now, and has the ability to take care of pathogens before they start causing damage, it never hurts to give it a little bit of help… especially as you age.

Alpha Lion hates missing workouts just as much as you do. So with all of the experience they’ve obtained over the years, they decided to create SuperHuman Armor, a supplement to equip you with some extra resources to fight back against various pathogens you may come across. And in true Alpha Lion form, they’re bringing something new to the table.

In this article we’re going to give you the complete rundown on what SuperHuman Armor has to offer. But before we do that, make sure to sign up for Alpha Lion news and deal alerts to stay updated with everything they have going on!

Just as you’d expect from a product with the name “SuperHuman” fronting it, this formula is stacked. It features several immune boosting ingredients backed by research at clinical dosages to provide the most amount of benefits. 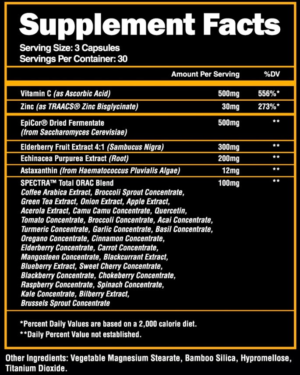 Before we dive into what these ingredients can do, first realize that this is a supplement. Practicing proper hygiene, exercising regularly, eating high-protein nutrient-dense food without caloric excess, and getting adequate sleep are all crucial to being healthy and preventing illness. Let those good habits be your main weapons, and SuperHuman Armor will give you some extra protection. Just keep that in mind before deciding to purchase any supplement, they’re not magic, but can be very helpful.

With a total of 90 capsules, SuperHuman Armor is the first capsule based product under the SuperHuman name. The recommended serving size is three capsules per day, which gives you a full 30 day supply.

However, during certain times of the year, you may be at an increased risk of getting sick, such as cold/flu season, so you can even double the dose to six capsules for extra immune system support.

For this product analysis we’ll just go over the dosages in one serving. Here’s what three capsules of SuperHuman Armor will deliver to prepare you for battle!

SuperHuman Armor is just a piece of what Alpha Lion offers to boost your health and performance. They also have a very underrated greens product called SuperHuman Greens, that’s perfect to take alongside SuperHuman Armor for the ultimate health stack! 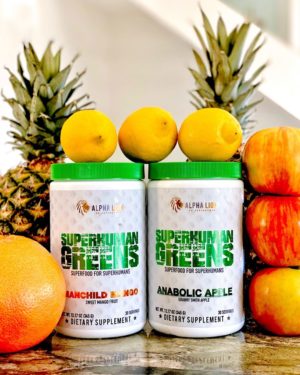 One of Alpha Lion’s most underrated products.

Here’s a glimpse of what SuperHuman Greens Offers:

With this dynamic duo, your immune system and digestive health will be supercharged to perform at an optimal level!

In addition, if you’re looking to prevent joint problems on top of the immunity question, we can’t speak any higher about Alpha Lion’s CYBORG joint supplement.

How Alpha Lion Does Immune

If playing the long game, health and longevity are a top priority. And if you’re constantly pounding away at the weights without focusing on the life factors — proper nutrition, sleep, hygiene, recovery, and stress management, don’t be surprised if your results rapidly plateau.

Ever since Alpha Lion started, they quickly became an influential brand and luckily, it was not all fancy marketing and advertising. Their supplements truly speak for themselves, because the formulas always overdeliver. With the early adoption of “SuperHuman” name, that term truly showcased what they’re all about. Of course a supplement cannot give you superpowers, but the pre workout sure can make you feel faster, stronger, energized, focused, and ready to tackle anything that comes your way. Yet we need to make it to the gym first! 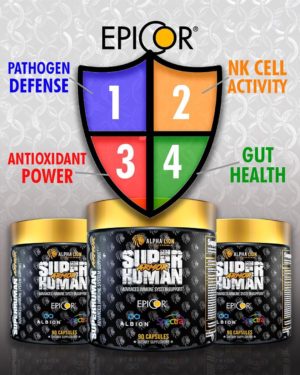 The four pillars that SuperHuman Armor is built from!

Alpha Lion is ready to take SuperHuman to another level by expanding the line beyond just pre workouts. SuperHuman Armor is a very impressive formula, and one of the things we respect most about Alpha Lion is their commitment to quality. No matter what product you get from them, you know it was formulated for maximal results. Alpha Lion always uses transparent labels that feature ingredients backed by plenty of research at or above clinical dosages.

This just shows that being SuperHuman goes beyond getting a new personal record in the gym or adding an inch to your biceps. It’s about optimizing every aspect of your health, performance, and life. Alpha Lion has mastered developing products that outperform nearly anything else on the market, and SuperHuman Armor looks no different. The brand is always hungry to keep improving your game, so don’t be surprised if you start seeing a lot more products showcasing the SuperHuman title. PricePlow will make sure you stay up to date with everything Alpha Lion has in store for the future. All you have to do is subscribe below and you’ll get access to exclusive news, reviews, interviews, and deals!