Axe & Sledge Dozer: Better Sleep for the Hardest Workers in the Gym

Axe & Sledge makes supplements for the hardest workers in the gym.

Last time Axe & Sledge made an appearance on the blog, we were highlighting some of their top selling pre workouts, including Seventh Gear and Hydraulic. One is an advanced high-stim powerhouse that delivers long lasting energy, laser focus, and increased muscular power and endurance.

The other is one of PricePlow’s favorite non-stim pump products because it not only delivers intense pumps, but also boosts focus, mind-to-muscle connection, and overall performance. And if you’re looking for an epic pre workout stack, look no further than Hydraulic and Seventh Gear to deliver.

It’s safe to say that Axe & Sledge has the pre workout category nailed down, among several others such as protein, meal replacements, fat burners, and amino acids. Despite having such a comprehensive line of products, Axe & Sledge is always hungry for more and they’re ready to take on a new category!

Dozer: A Sleep-Aid That Optimizes Performance and Recovery

Hitting the gym day in a day out, on top of going to work, and dealing with everything else that comes your way, life can get pretty hectic. Most people are willing to give up sleep before anything else – bad idea! Sleep is extraordinarily underrated when it comes to health, longevity, and exercise performance. Sure, you can lean on a pre workout like Seventh Gear to get you going, but that only lasts for so long, and sleep is irreplaceable! 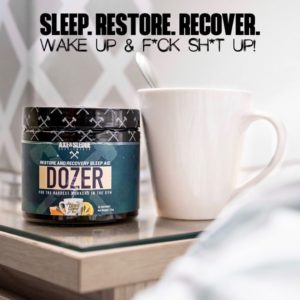 Dozer was formulated to help you get a good night of sleep to restore and recover from a hard day a work!

Axe & Sledge understands the importance of a good night’s rest, but they also know that a large group of people have difficulty falling asleep or staying asleep. After being dissatisfied with other sleep-aids on the market, Seth Feroce and the Axe & Sledge team decided to take it upon themselves to create a product that they can stand behind and actually deliver results. That’s how the idea of Dozer was born…

Dozer was specifically formulated to help you sleep, recover, and repair, to get you ready for another busy day ahead. Not to mention, this is a globally compliant formula, so anyone can experience what it’s like to be well-rested!

Get ready to see all that Dozer has to offer down below! But before we go any further, make sure to sign up for Axe & Sledge news and deal alerts, because they’re one of the hardest working supplement brands in the industry, so expect more products on the way!

Dozer is a comprehensive sleep-aid that contains a solid mix of generously-dosed compounds to help you fall asleep faster and stay asleep longer. This contains a blend of both herbs and single-ingredient compounds. Oftentimes, sleep aids use just one or the other, but Dozer brings a best of both worlds, using both modern and “old world” science!

Here’s what one serving (5.8g) of Dozer delivers:

If you’ve tried any products from Axe & Sledge, then you know they nail every one of their flavors. They’re known for creating unique flavors the industry has never seen before, such as Whiskey and Cola or Sweet Potato Pie.

Axe & Sledge always makes sure that the flavor is spot on before putting it up for sale. They believe that the hardest workers in the gym deserve the best tasting supplements on the market and they’re the company that’s going to deliver!

Here’s an updated list of all available flavors of Dozer:

Axe & Sledge has yet again brought another phenomenal product to the market with Dozer! When PricePlow heard that they were working on a sleep-aid, we didn’t expect it to be loaded with ten ingredients shown to help you fall asleep faster, stay asleep longer, and restore essential nutrients to aid recovery. 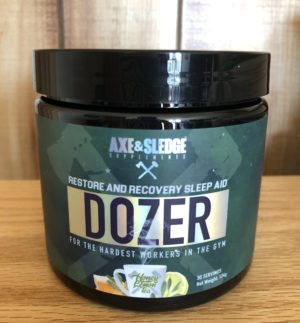 Axe & Sledge has finally entered the sleep-aid category with Dozer!

In order to be the very best, whether it’s at work, school, or in the gym, adequate sleep and recovery need to be a top priority. If you have trouble getting 7-8 hours of high quality sleep per night, then don’t be surprised if your mental and physical performance start to drastically decline.

We could write an entire book on how important sleep is, but we’re confident that several other experts have already done so. Just know that even if you block out enough time for adequate sleep, that doesn’t mean your getting the most out of it. Dozer is here to ensure your rest and recovery is optimized, pick some up and experience the difference of proper sleep!

Axe & Sledge has a lot more on the way, so make sure to subscribe down below to get access to exclusive deals, reviews, news, and interviews!