STORM Focus: A Nootropic that Disrupts the Norm

A Storm’s a brewin…

A Storm‘s a brewin in the supplement industry…

A hot new brand has hit the supplement scene, and in 2021, in a time with few new brands coming to market, that’s a big deal. Their name is Storm, and smashed with an edgy surfer/skater vibe and color scheme that looks like it was pulled from the golden days of the 90s, a moment’s glance can tell you that we’re about to be treated to something new.

STORM bills itself as “the fuel of choice for all the thrill seekers, norm-destroyers, and rule breakers” – a fitting image in an industry filled full of these types of individuals, whose die-hard consumers are anything but average.

STORM Focus is an energized nootropic that disrupts the norm with a new ingredient: Brainberry, which has been shown to improve hand-eye coordination and cognition.

STORM has launched with two formulas – Pre Workout and Focus, both of which bring something new and unique to the table. Normally, we start our introductions by talking about the pre workout, but with this brand, it’s better to disregard the norm. So today, we’re covering STORM Focus:

Focus is a lightly-energized nootropic supplement that provides a synergistic crew of ingredients to improve cognitive energy, performance, and vigilance – exactly what thrill-seekers and norm-destroyers seek. Each scoop has 75 milligrams of caffeine, allowing you to adjust doses as needed depending on the time of day.

More exciting, we’re introduced to a new ingredient named Brainberry, which comes from a fruit known as Aronia. In this article, we dive into this fruit’s potent constituent, with a research study showing improved hand-eye coordination and cognition.

It’s below, but first, sign up for our STORM supplement news alerts to get notified when more comes from the brand, and prepare to shatter all expectations and take the world by storm.

A single scoop of Focus will yield the following, packed with 75 milligrams of caffeine (so it’s possible to double-scoop this one):

So far with STORM’s initial supplements, we’ve been blown away by the flavoring. They’ve done a great job of sticking with botanicals that taste good, as we imagine Brainberry does. You can find an up-to-date list of flavors of Focus below: 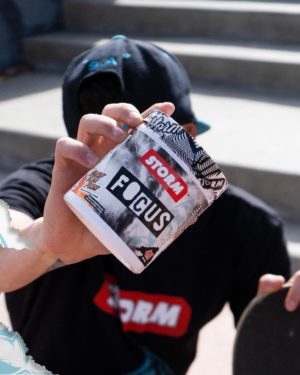 When was the last time you felt truly focused? Dialed in? Now presenting Focus by STORM

The STORM has arrived

Make no mistake, 2021 is a tough time to be launching new brands. Supply chains are drying up, prices are high, and the industry is treading very carefully. One could say that a storm was already here, but with the launch of this brand, we can now confirm that the real Storm is in.

The edgy black, white, and red surfer/skater labels and branding look like an incredible change-up, especially for an industry that sometimes seems to be trying to either “out-scare” or “out-color” the competition. However, for us, it’s all about what’s in the tub, and we’re happy to see a moderately-caffeinated supplement that brings us something new.

That something new is in the form of Brainberry, whose constituents look extraordinarily promising not only to the nootropic supplement community, but to scientific researchers as well. It’s a feel-good, focus-better supplement that will leave you in a better place than you started – and that’s exactly what we look for in a STORM after we’ve been through too long of a drought.