2018 Update: This product has been updated to represent the new 2018 formula and the limited edition candy corn flavor launched in October of 2018!

For a limited time at the end of 2018, Candy Corn flavored Focus XT is here! Can you even possibly be ready?!

Nootropics have become far more mainstream the past few years. Through the ups and downs of the industry, stimulants have come and gone, and when certain ingredients get banned, nootropics have come in to fill the void.

But there’s one product that’s been around all along. It’s been a long-time community favorite, it’s the nootropic supplement “base” to use when adding ‘other’ focus-enhancing compounds, and if you haven’t tried it yet, then keep on reading. 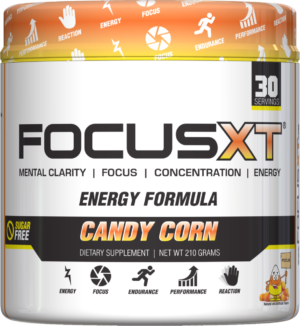 Is this real life?! Someone’s finally put out a candy corn flavored supplement, and it’s in a world-class nootropic?! Count us in!!!

SNS was one of the first companies to recognize the power of nootropics, and has been producing one of the most comprehensive and effective brain enhancing formulas around. The original was great, but the new formula is even more potent.

Their Focus XT formula is a leading energy and focus enhancement formula that serves as the perfect cognitive-boosting supplement whether you’re about to hit the gym or a long day at the office. It works amazingly on its own, but it functions even better as a nootropic stack booster, adding vital components to any great nootropic setup.

It’s also an effective replacement to those expensive and underdosed energy drinks, with compounds that actually work! And unlike most other nootropics, this is a flavored powder in both caffeine and caffeine-free forms, so if you enjoy drinking your energy and focus, you’ll love what SNS put together here.

We’ve got all the details ahead, but first, take a moment to check our deals and sign up for alerts from PricePlow so you get notified about these limited edition flavors:

Note: In the price comparison widget above, some stores may still have the old formula. In this article, we’re now looking at the more open formula with the longer ingredient list.

In fall of 2018, SNS came out with an Candy Corn flavor, and it really hits the spot — without some of the annoyances that candy corn has!

Focus XT contains several of the most well known brain-boosting nootropics around. Nearly all of the ingredients are well-dosed, but there is just a dash of blending inside. 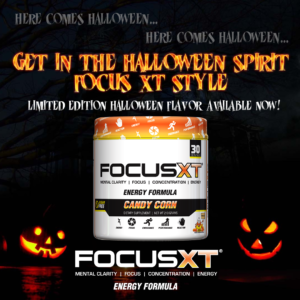 Yes, this is real life — a candy corn version of Focus XT!!

SNS gives you a wide array of interesting flavors to help you get your focus on pre workout or pre work:

You read that right! For the October 2018 autumn / Halloween season, SNS has launched a Candy Corn flavored version of Focus XT!!! If you’re looking for something different, this is about as different as it gets!! Get into the spooky spirit with this one before its gone!!

Takeaway: Focus XT is your Energy and Focus base

Need focus but hate all those nootropic pills? Focus XT is the drink for you.

Got a great nootropic stack but need to augment with extra choline, L-Tyrosine, ALCAR, caffeine, and more? Focus XT, once again, is the drink for you.

Click the SNS Logo above to compare prices and save on all SNS supplements on PricePlow!

In communities such as the PricePlow forums, Focus XT has long been known as one of the premier study aids, productivity supplements, and nootropic-heavy pre workouts. It’s stood the test of time and remains one of the premier brain-boosting products for the nootropic fan.

But the word needs to get out there to all the new-age nootropic consumers whose stacks could use a little “help” – and it’s a great value too.