L-Carnitine is Underrated. New Meta Review Reminds Us Why.

If you’ve ever researched dietary supplements, then chances are, you’ve stumbled across L-Carnitine. This versatile compound can be found in everything from fat burners to pre workout supplements to multivitamins. 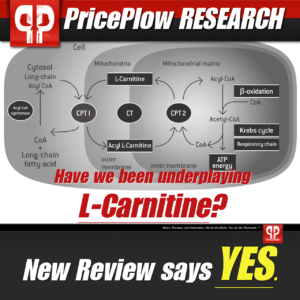 After reading this review based upon 100 citations, we are finding fewer and fewer reasons not to take ~2g L-Carnitine each day

L-carnitine helps transport long-chain fatty acids into the mitochondria of the cell, helping your body burn those fats for fuel during the Krebs cycle, the intracellular process by which nutrients are turned into ATP, giving the body energy!

There’s already a lot of information out there – and here on PricePlow – about how l-carnitine can be beneficial to fat loss, muscle gain, cognitive function, and post-workout recovery, especially in older individuals and those who don’t get a lot in their diet, such as vegans/vegetarians. It’s a cheap, effective, and safe supplement[1] that deserves a place in many individuals’ daily stacks for those reasons alone – but today we’re going to talk about one of its less-advertised benefits, thanks to a comprehensive literature review published recently in Nutrients,[2] citing nearly 100 studies!

Your body as a vehicle: the carnitine car analogy

For the sake of illustration, let’s think of the body like a car. You put in fuel, and a number of complicated systems work together to turn that fuel into energy and motion. Some of that fuel goes towards maintaining the systems themselves – charging the batteries, cycling coolant and oil through the engine, etc. The body works the same way – even if you don’t lead an active lifestyle, it takes a lot of fuel just to keep your body working correctly! In the same way that you can do things help your car run more efficiently — putting more power to the ground and keeping you going longer — a significant number of studies suggest that carnitine helps the body work more efficiently at a cellular level.

Before we get into the details, you can check out our featured L-Carnitine supplements on PricePlow and sign up for L-Carnitine deals and news alerts:

You may have read about the production of ATP being a driving force in lean muscle mass, strength, and exercise recovery – and some studies suggest that carnitine plays a key role in the cells producing ATP more efficiently. The process is driven in part by genes in what’s known as the “mitochondrial respiratory chain complex,” a group of enzymes that help convert oxygen, sugar, and proteins into ATP through a process called oxidative phosphorylation.[3] Long-distance runners supplementing with 2g of l-carnitine twice a day showed marked increases in the presence of many of these enzymes, suggesting that l-carnitine actually helps the body work more efficiently down at the cellular level![4] This is supported by a study of resistance-trained athletes showing that 2g per day of l-carnitine l-tartrate may have helped increase oxygen delivery into the muscle cells themselves.[5] 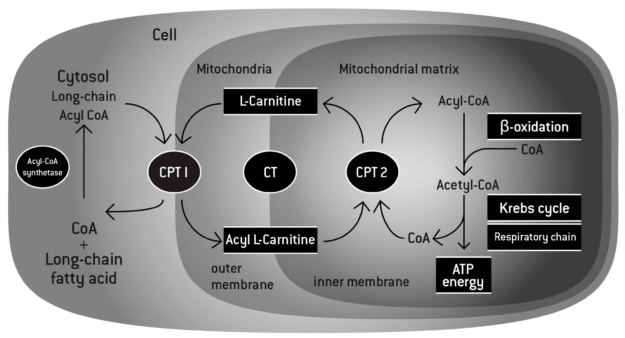 “L-carnitine function. l-carnitine shuttles long-chain fatty acids inside the mitochondria by forming a long chain acetylcarnitine ester. The complex is then transported into the mitochondrial matrix by carnitine palmitoyltransferase I (CPT I) and carnitine palmitoyltransferase II (CPT II). The fatty acids are then broken down through the process of β-oxidation to deliver the 2-carbon molecules to the Krebs cycle, leading to the generation of energy under the form of adenosine triphosphate (ATP). In addition, by binding an acetyl group, l-carnitine can maintain the levels of Acetyl-CoA and coenzyme A, playing its buffering role.”[2]

Muscle cells aren’t the only cells that work more efficiently in the presence of carnitine. Especially with adequate feeding and water, consumption of 2g per day of L-Carnitine (are you noticing a pattern here?) showed a positive increase in the sensitivity of the body’s androgen receptors, as well as increases in the presence of luteinizing hormone,[6] suggesting it may help the body’rights endocrine system work more efficiently as well. 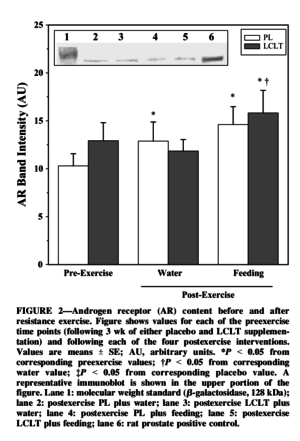 LCLT for the hormonal wins! Figure shows values for each of the preexercise
time points (following 3 wk of either placebo and LCLT supplemen-
tation) and following each of the four postexercise interventions.[6]

Here’s what crazy from that study: serum testosterone within the blood decreased following LCLT and exercise, which the researchers theorized was due to increased muscle protein synthesis and increased cellular uptake of testosterone!

Not just for transport in… L-Carnitine helps with waste matter disposal too!

It’s not just good at moving things into the cells — L-Carnitine also seems to help the cell dispose of waste more efficiently![7] When twenty active, resistance trained-males were given 2g per day of l-carnitine l-tartrate and prescribed a high-carbohydrate diet (which, interestingly, included alcohol!) and measured for two weeks of exercise, they noticed no change in oxidation of carbohydrates, nitrogen, BCAAs, or plasma urea, as well as no change in fat, carbohydrate, or protein metabolism between baseline measurements, and no difference between the supplemented group and the placebo group. However, the supplemented group did show a significant difference in cellular ammonia levels, indicating that carnitine may help shuttle waste away from the cells, ultimately reducing the metabolic stress of exercise (or alcohol consumption!).

Incredible Effects in The Elderly 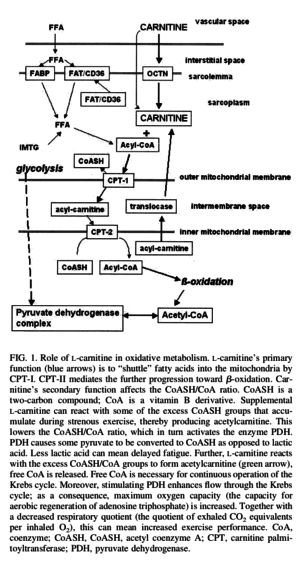 One exciting set of studies suggests that the efficiency-boosting properties of L-Carnitine are incredibly effective in mitigating some of the worst effects of aging. In one placebo-controlled, double-blind study of 66 centenarians – that’s right, people age 100 and over – who reported fatigue even after slight physical activity, all 32 who received 2g of l-carnitine per day (as opposed to 34 receiving a placebo) demonstrated significant improvements in total fat mass (-1.8kg average vs +.6kg), total muscle mass (3.8kg average compared with 0.8kg), physical fatigue, mental fatigue, fatigue severity, and performed better on a mental state examination.[8]

These results track across the board with other forms of carnitine, too! A group of 96 elderly subjects (aged 71-88) with chronic fatigue taking 2g of acetyl l-carnitine twice a day showed significant improvement in physical and mental fatigue and performed better on cognitive tests.[10] 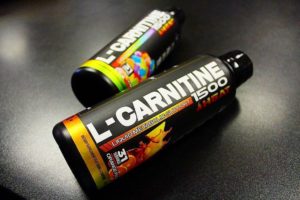 L-Carnitine supplements have been getting some “enhancements” lately, thanks to some hot new thermogenic ingredients! Featured: VMI Sports L-Carnitine 1500 Heat

Needless to say, it’s difficult to find a reason why any senior citizens should not be adding L-carnitine supplements to their diets.

This monster of a meta-analysis tells us one thing: L-carnitine is better than we’ve been making it out to be. We typically state that L-carnitine is best for those who are deficient – namely vegans, vegetarians, and the elderly. However, most of our readers are athletes, and they often happen to be run down on carnitine too! This means that nearly every PricePlow reader could benefit from long-term supplementation. 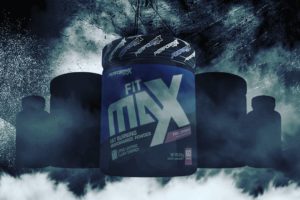 If looking for a clinical dose of LCLT with stimulants in a powdered fat burner, then Performax Labs FitMax is our top choice.

Not only does the literature suggest that carnitine helps with fat loss, muscle gain, and cognitive function, it appears that it helps the body as a whole work more efficiently in ways we rarely see advertised. “Gain muscle and lose fat!” is, of course, a way sexier sales pitch than “help your cells work more efficiently,” but we were surprised at just how good this stuff really is – time and time again. Sometimes someone needs to smack you in the face with a 100-citation work of art to make you realize that.

GBB: Another way to enhance carnitine!

We recently wrote about a hot new ingredient that can more than double circulating carnitine levels – GBB: Gamma Butyrobetaine! This ingredient is often thermogenic for many users, so it’s been added to a lot of these new L-Carnitine supplements!

Not only does carnitine help the cells use oxygen and dispose of waste more efficiently, it also has those incredibly remarkable benefits for elderly individuals by mitigating fatigue (presumably for the same reason — the increased efficiency of cellular function and less energy wasted). In no study were any serious adverse actions reported, and all forms of carnitine, whether l-carnitine/levocarnitine, acetyl l-carnitine, or l-carnitine l-tartrate, showed benefits at 2-4g per day. Carnitine isn’t as inexpensive as creatine, but it’s quite affordable and deserves a place on your supplement shelf for all of its health benefits!

What about keto dieters? Stay tuned…

Next up — we need to start testing carnitine in the context of the ketogenic diet. After all, a fatty-acid transporting amino acid should have major benefits for a high-fat diet, right? Stay tuned to PricePlow and sign up for alerts to find out next.

See our featured L-Carnitine supplements on PricePlow and sign up for L-Carnitine news alerts above.