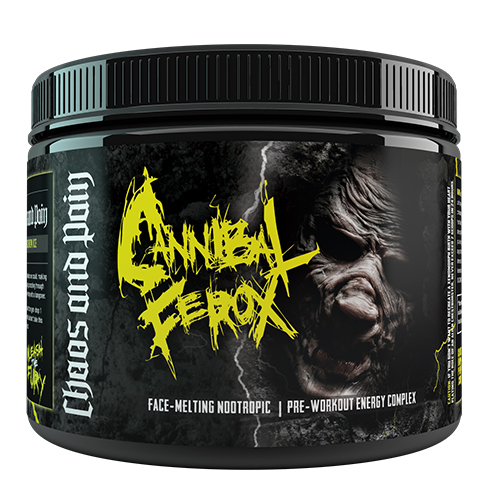 Chaos and Pain is back with yet another reformulation of Cannibal Ferox. This time AMP Citrate is gone, but there’s still plenty of stims to get you going.

Now that the holiday season has come and gone it’s time to get back to business.

To kick off the new year with some new gains, we’ve got some pre workout upgrades to get you amped up to kick some serious ass in the gym. Chaos and Pain has recently reformulated their high-powered pre workout Cannibal Ferox, and believe is, it’s a doozy!

As crazy as ever – this is an energy and focus pre workout!

You can see just what you’re getting yourself into below, but first make sure to check out the best deal and sign up for price drop alerts:

Note: Cannibal Ferox is frequently updated. Instead of making new posts for each update, we are going to simply edit this post to make it your one-stop shop.

In the price widget above, we link to various stores that will have different versions in stock. You may need to check with them to see what version they’re really selling. All versions of Cannibal Ferox are equally hardcore, mind you.

We’ll warn you now, this is NOT for the stim-sensitive of faint of heart. This is a pre workout for those that need an IV drip of caffeine to even turn off their alarm clocks in the morning.

All that being said, if you’re looking for a high energy pre workout to take care of your needs in one scoop, this is easily one of the go-to options. Without further adieu…

True to form, Chaos and Pain has quite a litany of unique names for the various flavors you can try for Cannibal Ferox, including:

As we alluded to up to, Cannibal Ferox is for the stim-fiends out there who love their caffeine and want to feel blitzed out of their mind going into their workout. Cannibal Ferox does away with the notion of needing 2-3 scoops of a pre workout just to get going. 1 scoop of the new Cannibal Ferox gives you all the energy you need and then some.

For the rest that don’t need 450mg of caffeine, you’ll want start with ⅓ – ½ scoop of this product and go from there. All in all, the formula is solid, assuming you can handle a full scoop, otherwise there are other options out there that contain higher doses of known ergogenics with half the caffeine.

This is definitely a high-energy, high-focus pre workout, but it’s not a kitchen-sink. Even at full dose, you’ll want some spare creatine and betaine powder at other points in the day, which is fine. And at half dose, you might just need to add more pumps if you’re gettin’ after it.

In the above price widget, be sure to check each store for the version they’re carrying!