Ah, “beast mode”. The nirvana of gym goers. That moment when the stims hit you right and the weights are just flying like feathers. However, how often do you really reach this mythical state? Our guess is not often. Beast Sports Nutrition is here to change that.

We recently updated our Super Test Max article, but now it’s time to turn up the stim: 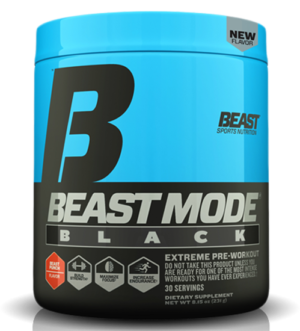 Looking to get into Beast Mode and are down with 400mg caffeine and love the yohimbe? Then it’s time to upgrade to Beast Mode Black.

The Beast Mode Black pre workout is not trying to reinvent the wheel. The ingredients present are all familiar, barring perhaps “FruiteX-B”. Instead, Beast is trying to perfect their wheel.

The stimulants aren’t just present; they’re present in some impressive doses for a pre-workout that won’t cost you an arm and a leg. At under $1 per serving, Beast Mode Black is already in PricePlow’s good graces for our cost-conscious, high-energy consumer. After all, not all gym-goers want a $2.50 pre workout!

Serious For Serious Stim-Junkies who love their yohimbe

So let’s cut to the chase – when we say high-energy, we’re talking about 400mg caffeine in a scoop here, and a serious dose of yohimbe – and Beast has disclosed its standardization to us!

Let’s take a look at the ingredients, and dig into what this “FruiteX-B” is, after checking our coupon-driven prices on PricePlow, where you can also sign up for Beast News alerts and deals:

Although there’s only one “new” ingredient for most of our regular readers here, take a look at this yohimbe dose!

Beast has actually been through a few runs of Beast Mode Black, since theacrine was originally difficult to flavor until the industry “figured it out”. Beast has kept it simple with Blue Raspberry and Fruit Punch. If you see Pink Lemonade, that’s from an older version.

Note that we have artificial colors like Red #40 in Beast Punch and Blue #1 in Blue Raspberry.

Mike took a very good, long look at it, and there’s some serious pros, a few cons, and some constructive criticism for Beast:

It’s not for everyone, but it’s for those who need Beast Mode energy

Beast Mode Black is a promising high-energy pre workout on paper, and it’s not going to bankrupt you while at it. It provides everything a “standard” stimulant-lover wants, and should help you crush any workout you could have in front of you.

However, we’re left wondering if they went too hardcore here – and we’re talking specifically on the yohimbe. 400mg of caffeine, combined with both 75mg yohimbe and theacrine is not for the faint of heart.

Needless to say, if you can’t handle your stimulants or you’re prone to anxiety or insomnia, we’d avoid Beast Mode Black. But in that case, we’re guessing you wouldn’t buy a product named “BEAST MODE” in the first place!!

For those that love the stim, want the yohimbe rush, yet don’t want the stuff that’s in the FDA’s crosshairs, you’ll find a holy grail in Beast Mode Black. And if you can’t have that yohimbe, it’s back to Beast Mode for you – and with these deals in this “$2/pre workout market”, we’re not complaining about either.