MusclePharm Wreckage – Likely to Live Up to its Name 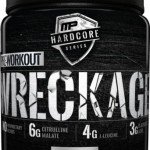 MusclePharm Wreckage is part of the soon-to-be-released Hardcore Series, which we expect to be a higher-end, higher-priced series aimed at experienced athletes and bodybuilders.

Looking at the non-proprietary label and doing some analysis, here’s our honest opinion:

After doing our full analysis, the TL;DR is that this is a must-try pre workout supplement for 2015, but long-term value will depend on how far we can beat the costs down.

To stay on top of this one, you can sign up for MusclePharm updates and alerts below, or head over to our Muscle Pharm page and click monitor this brand.

After that, let’s get down to business because this is an interesting pre workout supplement.

Haters gon’ hate, but not today

Right now within the online supplement community, hating on MusclePharm has been the cool thing to do lately. And we can’t say they don’t frequently deserve it.

But we’re going to give credit where credit is due – even if we haggle over some of the lower-dosed ingredients, this is going to provide for some aggressive workouts – just as hoped with the “Hardcore” series.

Let’s break it down one by one. 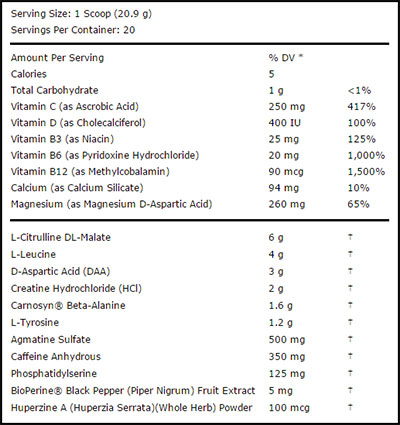 The Wreckage Ingredients / Supplement Facts. All heil the open formula. We discuss each one below (minus the supporting vitamins and minerals).

Right off the bat, let us praise MusclePharm for the 100% open label – no prop blends here!

As a massive company with what seems to be an unlimited marketing budget, MusclePharm could probably sell this without doing that. But they’re clearly listening to their most informed fans, and for that we appreciate it.

By knowing what we’re getting, we can build solid, research-backed stacks using this product.

If you haven’t noticed, this formula seems to be slightly inspired by JYM’s Pre-JYM formula. And not that that’s a bad thing – Pre-JYM is currently a top-seller and users are loving it.

Counting the ways, both have:

If someone were going to mimick a supplement yet improve upon it, like we feel MuscePharm did here, there’s absolutely no shame in starting with a product like Pre-JYM.

Assault is still very popular and is likely going nowhere. But in all honesty, Wreckage looks a lot more appealing. As mentioned, both of them could use more creatine, although Wreckage wins in that department as well.

To conclude our pre-review…

Arguments could be made regarding some of the dosages, but at the end of the day, this product is going to live up to its name, and will definitely provide some new effects thanks to the focus enhancers.

It’s going to be a must-try supplement for 2015, and we’ll see where the reviews take us from there.

Be sure to sign up for alerts here on PricePlow. We’ll have more information on Wreckage as soon as it becomes available, and we’ll have the best possible prices and sales for you as soon as it’s released.