Update – Feb 4, 2015 – We now have Exhibit A, which shows the plaintiff’s lab tests. They are discussed below.

This comes after a lull in the recent rash of lawsuits regarding the ongoing amino acid protein spiking scandal, and is quite easily the biggest case yet.

This lawsuit was filed in the State of California, and was done so by a different set of law firms than the previous class action suits filed above.

You can see the publicly filed documents below, which now include the lab tests in question:

And the lab test from Exhibit A:

What the complaint filed says

The complaint begins very much like the others, defining what “protein spiking” / “nitrogen spiking” / “amino spiking” is, referencing GNC, raw materials costs, etc.

Then the juicy stuff:

As always, we need to remind you that these are nothing but allegations.

We are missing the following CRUCIAL pieces of information:

Until there is due process, nobody is guilty.

MusclePharm has “responded” by posting all protein tests at the MPSSI

Update: April 17, 2015: MusclePharm is now posting their “3rd party” protein tests to the MPSSI (MusclePharm Sports Science Institute), and these tests include Iron Whey and Iron Mass – one test from each batch.

You can read the post discussed above. Anyone can now go to the site, enter the batch/lot numbers, and see how the protein performed from their exact batch.

Some discussion, now that we have Exhibit A

This very well could be a “legal” product

Looking at the incomplete data provided to us in Exhibit A, if this is a valid lab test with a perfect chain of custody, MusclePharm might not have done anything technically “illegal” per the FDA guidelines. 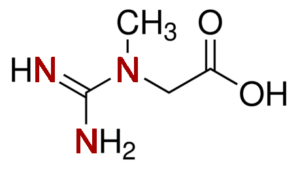 After all, glycine is on the label, and per current guidelines, it does get counted as a protein. Meanwhile, according to Kjeldahl testing, the creatine and the BCAA nitrates would show up as “extra protein”.

So on a purely technical technical technical basis, you might actually have “40g” of “nitrogen based stuff” in here, which sadly qualifies as protein if reading the FDA’s guidelines to the letter of the law. This is all discussed in our original amino acid spiking article.

But is this grounds for suit?

The question is, Is this misleading and deceptive?

That is what the lawsuit is accusing. One major point is that the label states,

This could be the main factor that pushes this suit forward.

Meanwhile, in our other article, we’ve shown that creatine, with its three nitrogen atoms, can really throw off Kjeldahl tests. In addition, adding Nitrate to the BCAAs further complicates matters due to nitrogen being a primary component of Nitrate (formula NO3).

Since we haven’t heard a single update on the other class action complaints, we really don’t know if the courts / judges believe this is misleading / deceptive enough to go to trial or award settlement.

We’ll keep this and our other pages updated as we know more.

This is the first formal accusation of misleading / deceptive claims against MusclePharm, who have been “accused” on Twitter and in various discussion forums quite a bit.

In fact, the accusations were so loud and persistent to the point that MusclePharm released some lab tests for Arnold Schwarzenegger Series Iron Whey lab tests, although we speculated that there were more questions than answers.

The fact that MusclePharm is now posting certificate of authenticities – with detailed amino information – to the MPSSI, as discussed above, may truly help alleviate consumer fears for any batches of protein that are listed on their site.

What is Arnold’s Role?

When researching Arnold Schwarzenegger’s actual involvement with MusclePharm, we found the following pieces of information:

Since MuslcePharm has 13.11 million shares outstanding, that would amount to him owning 5.95% of the company – one of the most major shareholders. Again, that’s a big if – he could easily have bought or sold more shares.

At the time of the original agreement, however, that number was higher – he originally had an 8.8% stake in the company, which was worth $7.2 million at the time.[2]

Due to the fact that Arnold is not listed on Yahoo’s “Key Holders” page[4], he may no longer have such a stake, as the major shareholder with the least number of shares owns 222,678 shares at time of writing.

This is to provide some perspective as to Arnold’s potential stake in the corporation.

We’ll keep this post up to date and try to get our hands on Exhibit A for you, as it is publicly available information.

Update, May 2016: Hi-Tech Pharmaceuticals has jumped in on the act, and are now suing both Brad Pyatt and MusclePharm over unfair competition.