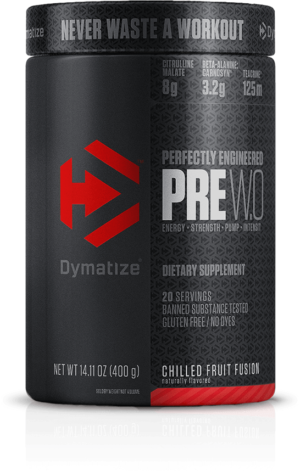 Dymatize is back with a bang as they debut a brand new clinically dosed pre workout featuring 125mg of TeaCrine!

Dymatize is one of the true behemoths in the supplement industry. The brand has long been known as one of the giants of protein, primarily due to the incredible popularity of its top-rated ISO-100 whey protein isolate protein powder.

Over the past few months, Dymatize has been on a serious mission to revamp their look and feel within the supplement community and appeal to athletes of all kinds. Along with a sleek new look, the brand has recently launched a monstrous pre workout that’s sure to turn some heads.

Pre W.O. is a clinically dosed pre workout that brings focus, pumps, and endurance, but where it really stands out is the 125mg Theacrine included in each scoop!

As one of the major mainstream brands out there, we love to pit Dymatize against Optimum Nutrition, and the honest truth is that Dymatize is eating ON’s lunch all day long lately!

We’ve got lots more info ahead on Dymatize’s brand new pre workout, but before we get there, take a moment to check the best deal and sign up for alerts from PricePlow:

The tagline “Never waste a workout” looks to be dead on.

Dymatize Pre W.O. hits all the right notes of pre workouts these days — it’s open labeled, clinically dosed, and brings energy, focus, stamina, and pumps. But, where the product really jumps off the page is when you take a look at the 125mg TeaCrine dose, which we’ll address coming up! Can they make it taste great though? Rumor has it that the answer is yes…. 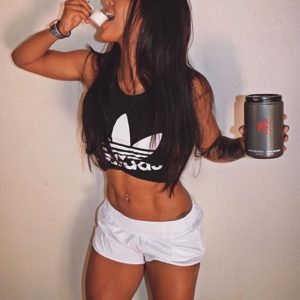 Dymatize Pre W.O. may taste good enough to not even need mixing!

Although Dymatize is one of the oldest brands around, they’re not using old school flavors like Fruit Punch or Blue Razz for their new Pre W.O. The brand has created three unique flavors sure to catch your eye and tickle your tastebuds:

Again, biggest question is how they worked the flavors around the theacrine. Word is that they nailed it, but we’ll have to review this to find out for real.

Cotton candy’s definitely one of the hot flavors lately.

Light-stimmed users can easily get away with half a scoop and still have pumps that are better than a lot of the cheapo pre workouts out there.

We also have to wonder if you shouldn’t take this too late in the day, because Theacrine lasts longer than caffeine. Be aware of that if you train after work and need to be in bed by 10pm or anything!

Takeaway: Dymatize is obliterating the other big name brands

We’re loving this new Dymatize. Click the image to see best deals on all of their supplements!

Dymatize has their rebranding effort off to an amazing start with a brand new pre workout that does just about everything right. While its formula is similar to many of the clinically dosed pre workouts on the market, where it stands apart from the rest is the increased amount of TeaCrine, which should give Pre W.O. a little bit extra juice compared to the rest of the other pre workouts you’ll come across on a daily basis.

Seriously, where the hell is Optimum Nutrition lately? Because of the “big two”, Dymatize seems to be squeezing the life out of them, and Pre W.O. is clear evidence of that. We can’t wait to use this.