The Pitbull Labs Pre Workout: Energy and Focus with Bite

2019 Update: Pitbull Labs unfortunately went dormant for a while, but rumors are that they’re coming back…. stay tuned and sign up for our Pitbull Labs News alerts to learn when they’re officially back! 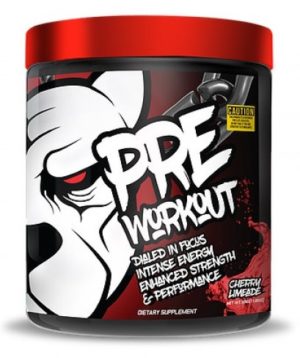 There’s been a new brand on the scene that’s got open labels, well-dosed products, and some of the coolest branding we’ve seen in a while. It’s none other than Pitbull Labs – and their bite backs up their bark in more ways than one.

The brand is leading the new age of companies that are looking to do things the right way from inception, bringing solid formulations that aren’t reliant on a few exotic ingredients that will inevitably get banned. For their introductory feature on the PricePlow blog, we highlight their barking-good pre workout, simply titled the Pitbull Labs Pre Workout.

We’ve got more details ahead, but first make sure to check the best deal and sign up for alerts from PricePlow. You can also check Pitbull-Labs.com to compare against our coupons:

Pitbull Labs has crafted a pre workout that’s all about the energy and focus. Sure, some of you are probably wondering where the pumps are in this pre workout. You’ll get your pumps from Pitbull Labs in there soon to be released stim-free pump supplement. This dog is all about getting you in the training zone and building some muscle and endurance.

”Pitbull Pre was always designed to be stacked alongside our pump powder, “The Pump”. Unfortunately due to cost, it is impossible to make a clinically dosed, fully stacked stim / pump pre, it will be too expensive for most retailers / customers etc.

So instead of doing it half arsed and sprinkling a few pump ingredients in to the pre workout, we went exclusively for performance, focus and stimulation.

While on “The Pump” we went for a fully nitric oxide boosting, muscle swelling and vasodilating experience – combining the 2 to give a next level workout, with nitrates being the only thing missing that I personally would want in my stack.

We decided not to use any of the “exotic” or “grey area” stimulants, and as most people are now reformulating and getting largely negative feedback on the new versions, I stand by that decision – all PBL products will be 100% US compliant, no ambiguities or vagueness.

As well as what’s in it, I also like to point out whats not in it – artificial colors or dyes, which are my biggest bugbear in the sports space. The evidence is they are bad for gut health, brain health and carcinogenic.

“For some people it can become a go to pre, and for the heavy stim users it’s a good product to cycle on. Personally I found the sweet spot to be 1.5 scoops for me. For the heavy duty stim users, we are working on a “Stim bomb” pre workout. We listen to what the people tell us!

PItbull Labs is proudly bred in America and dedicated to sponsoring rescued pitbulls in addition to bringing consumers the best supplements possible.

If you’ve been following PricePlow on Facebook, you have probably seen comments from Sam Strange. That’s the founder of Pitbull Labs, and it looks like they’re doing some great stuff beyond supplements, like sponsoring rescued pitbulls. We love this kind of stuff!!

So make no bones about it, Pitbull Labs hit the scene with a certified home run of a pre workout. It provides plenty of stimulants, ergogenics, and nootropics to get you in the zone all workout long – without jumping into the “next exotic stimulant” fray. This is a formula that can stick around forever, and if it works as well as we think it will, it should.

From the even mix of slow and fast releasing energy to the sustained focus, you’ll have no trouble getting primed for you weight room showdown, like a true Pitbull.