Bait and Switch: The REAL Reason to Hate Proprietary Blends 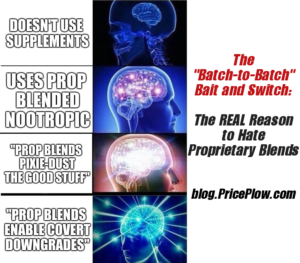 You know about pixie-dusting, but have you ever thought about the “batch-to-batch bait-and-switch”?!

Over the past decade, the supplement industry has made a serious shift towards open labeling practices and away from proprietary blends. Nearly all new brands on the scene are opting to disclose the dosages of all active ingredients, while the older brands that fail to do have been dying slow deaths, need to resort to marketing tactics away from smarter consumers, or are at least getting pressured into semi-disclosure.

Some brands like NutraBio take it even further, with “full label disclosure”, where they even tell you the amounts of inactive ingredients, such as colors, flavors, and sweeteners. Transparent Labs has also gotten in on that action, true to their name.

Even some protein manufacturers are telling you the exact protein blends inside of that “whey protein” ingredient, which you must realize is itself a proprietary blend due to various grades of protein! 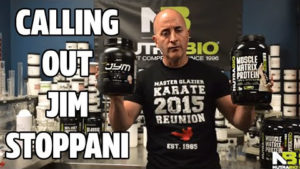 Not the first time we’ve discussed the benefits of NON. PROPRIETARY. BLENDS.

At this point, most smart consumers know the main reason why proprietary blends are typically a bad deal for them – because the effective and attractive ingredients can be pixie-dusted and buried underneath cheap ones. That’s simple enough.

So in this article, we’ll fly through that part, and then get into the real reason why proprietary blends are risky for consumers: the bait and switch.

First, let’s put together a nootropic supplement to increase our focus and energy:

Our non-proprietary blend. This is our “what it COULD be” formula.

Not too bad of a formula if you want the energy. We’ve seen better but we’ve definitely seen worse (it could use L-Tyrosine but I forgot until the end). Consider this our “what it could be” formula. We would know exactly what we’re getting, each and every time.

So let’s launch our product! But being the crafty crew we are, we launch it under a proprietary blend.

To the right is the actual label that we launch with.

Right off the bat, most smart consumers will avoid this one unless there’s a great deal or trusted reviewers like it. There’s just too much risk here — even if caffeine is disclosed!

But smart consumers aren’t our demographic.

So we make it taste great, do our marketing thing, have some good coupons, and because the formula’s got enough kick and feels sharp, it gets solid reviews.

After our coupons and affiliate payouts, we’re not making tons of money, but that’s okay. We’re playing the medium-term game here – not the long-game nor the short-game.

If you noticed that we’re no longer listing our herbal standardizations, despite them being nice and strong, then good eye — that’s stage three of our deception here, so hang tight.

Anyway after a year or so, things are going very well.

The batch-to-batch bait and switch: downgrading formulas for upgraded profits

Raw materials shortage?! Not a problem!

During this run-up, there’s also been a Lion’s Mane shortage for some reason, with prices going up 3x. No problem there, we have it buried in our prop blend and don’t need to use a ton anymore… just find some low quality crap and sink the dosage! We have price targets to meet!

After an aggressive marketing campaign, we’ve got 100,000 Instagram followers, a huge network of affiliates, we’re up on the Amazon rankings, celebrity podcasters are wearing our t-shirt, and even those two guys on PricePlow’s YouTube channel liked the formula well enough despite ragging on the prop blend and the missing L-Tyrosine.

But now it’s time for our Ferrari and beach house! President Trump just fought to lower tax rates, so now’s the time to strike and take profits before the market moves on.

Now we launch a new batch, all with “upgraded candy flavors” and the exact same label. To the letter! Only, this time, the real formula looks more like this: 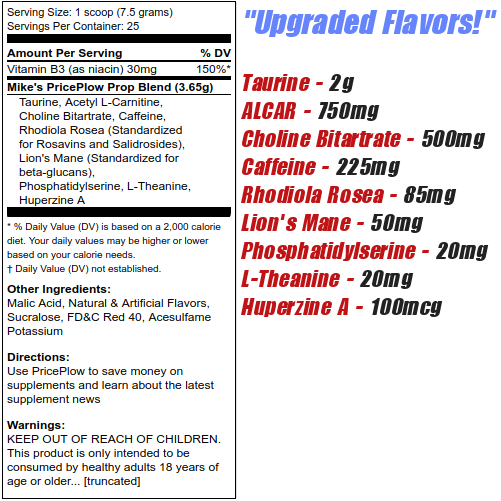 Profit time! Screw all those expensive herbs, L-Theanine, and PS… I want my Ferrari! SAME EXACT LABEL THOUGH!

Forget all those fancy herbs and that costly L-Theanine and Phosphatidylserine… it’s time to cash out! Right?

But wait – there’s more. Remember how we decided not to disclose our rhodiola or lion’s mane standardizations? And how there’s a shortage on quality lion’s mane, as the gray box above mentions? 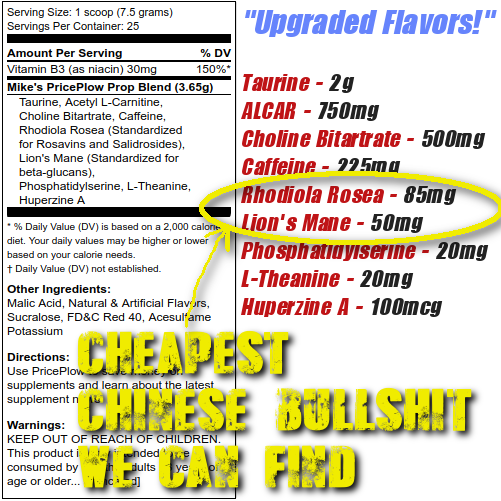 There’s a reason we didn’t put the standardizations on that label! We suck em in with the good stuff, then switch to the cheapest crap we can find later on when it’s profit-taking time.

Truth be told, we’ve always been on the lookout for cheap raws, but when it comes to the stronger herbs that provided some pop in the past (which may or may not have passed internal spec — shhhh!), how about we just rely on a bit more caffeine?

Yet because our crazy new flavors are so good, by the time anyone realizes the product itself actually sucks now, we’re long gone, too busy pouring champagne on bikini-clad women on your yacht.

*Meanwhile, if you haven’t noticed, our product is over 50% inactive ingredients! Can you guess why?

Beware of changes of ownership

Alternatively (and actually more likely), you cash out by selling the entire business / product line, and the above process happens after the product is in the new (ie wrong) hands.

What do you care though? It’s no longer your responsibility, and you’re too busy watching the sunset over the ocean every night anyway. 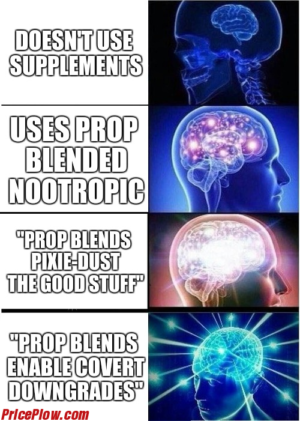 This is why it’s always important to be mindful of changes of ownership in any food-based or nutrition-based industry. Sometimes it’s for the better… but oftentimes it’s simply not.

The Moral of the Story: Prop Blends are Bad Because of Inconsistency

Don’t think for a second that the above scenario hasn’t — and doesn’t — happen on a regular basis.

This post was written because deceptive prop-blend defenders argue that “Manufacturers who prop blend bad/cheap/ingredients are what’s wrong.”[1] They blame the players, not the game (ie not the prop blends themselves). These shills are only discussing half of the problem, while completely (and rather conveniently) ignoring the other half that always finds a way to rear its dirty head.

At the end of the day, there is only one way to know if the formula is still as good as that first batch – with a fully disclosed, non-proprietary formula.

“But it protects muh formula!”

This is also another weak lie. You act like we can’t get your product lab tested for a few grand? By the time we’re done testing it, we’ll probably have better data on it than you do, given the current state of contract manufacturing.

So if you’re against prop blends because “the cheap ingredients are masking the pixie-dusted ingredients”, you’re only seeing half of the playing field. The real scam is in the batch-to-batch bait-and-switch described above — and it’s perfectly legal.

But it ONLY works with a prop blend. Now you know how to avoid it.