Zhou Nutrition Neuro Peak is one of the best-selling nootropics on Amazon, but is it all hype? We have some mixed opinions.

Type the words “nootropic” into Amazon and you’ll be bombarded by a never-ending supply of cheap and underdosed supplements billing themselves as powerful cognitive enhancers, fueled by various ingredients, often paired with caffeine. Unfortunately for unwitting Amazon shoppers, most of these products are quite underdosed… but there seems to be a sweet spot in the $20 range that many top brands haven’t discovered yet.

So which of these nootropics is top-ranked on Amazon, and is it worth it?

Today, we focus on the Neuro-Peak by Zhou Nutrition, Amazon’s current best-selling nootropic… available in the popular $20 range including Prime Shipping.

One thing’s for sure, it’s a low-cost one, which may make it worth considering for entry-level purposes. Question is, if we wanted to, could we build the same thing for even cheaper?

We’ve got the details down below, but first, take a moment to check the best deal and sign up for PricePlow alerts:

Neuro-Peak bills itself as one of the best nootropics available for people, but when you start to really dig down into the ingredients and dosages, you come away with a few questions on the product.

Can We Build Our Own Cheaper?

This supplement is in no way overpriced, but it could certainly be improved upon…substantially, so let’s see what we can get for a reasonable price using off-the-shelf ingredients (all prices are as of January 24,2018 using PricePlow): We’ve done this previously for Onnit Alpha Brain as well as Lumonol.

Yes, it will cost 2.5x as much as Neuro-Peak, but you’ll also get stronger doses of the ingredients than what you’d get in Neuro-Peak, even if you were double-dosing it.

For advanced users, we’ll stick with Nootropimax for now

So it looks like this is a tough formula to build, and if someone’s interested in trying an “entry-level”, caffeine-free nootropic for a couple of weeks, it could be an easy $20 experiment as opposed to some of the egregious $60 nootropics we’ve dissected in the past.

Our preferred option will still be Performax Labs NootropiMax, which currently costs only $24.49 with PricePlow’s coupons (although you’ll need shipping – so let’s just put it at $30), and actually delivers serious doses of everything we like in a brain supplement! Note, however, that it also has caffeine, and Neuro-Peak is caffeine-free, which would allow you to keep your coffee or energy drink as opposed to our favorite, Nootropimax. 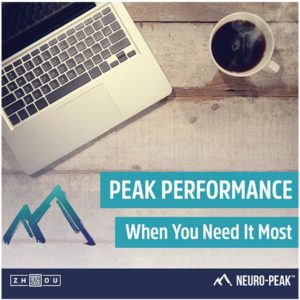 Zhou Nutrition states to take one capsule with a meal one to two times per day.

Note that with just 30 capsules in a bottle, this means you’ll either have a one-month supply or a 15-day supply. This almost makes it more like a “beginner’s nootropic trial” to us than anything else.

Takeaway: Maybe if you’re a beginner with $20 to burn on Amazon

As nootropics become increasingly more popular, so do the number of imitators and bad formulas looking to make a quick buck and capitalize on the surge in popularity. Neuro-Peak is a prime example of a product being incredibly popular, and receiving thousands of reviews, but when you get down to it, the formula is a bit deficient in a few areas.

But if you look at the most popular nootropics on Amazon, they’re all in that $20 range — shipped free with Prime — so there seems to be something there that other supplement companies should look into. Because in that $20 range, we’re sadly not seeing a whole lot better, unless we were to get just two or so of our favorite raw ingredients.