The disruption of the norm continues from STORM, the supplement industry’s hottest new brand. On the heels of their initial releases — STORM Pre Workout and STORM Focus — we have another energy-based supplement, and it’s similarly full of cognitive enhancement.

Clearly, STORM wants to get you stoked for weight loss: 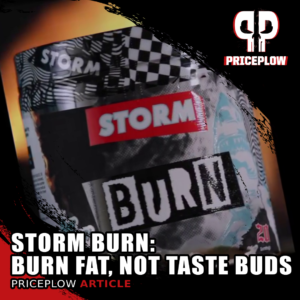 Burn fat without burning your taste buds! STORM BURN is a powerful weight loss support supplement powder that doesn’t have the spicy taste!

STORM Burn is a weight loss aid that comes in powder form, boasting a large 300 milligrams of caffeine per scoop. If you can handle that amount of energy, you’ll be getting large synergistic doses of carnitine and bioactive choline to support your body’s fat metabolism.

True to their motto — “Disrupt the Norm” — STORM Burn goes against the grain (literally), since it doesn’t have any spice in its flavor. Instead, it provides key ingredients to avoid diet-destroying deficiencies, including a solid dose of Chromax chromium picolinate on top of the choline, carnitine, and caffeine mentioned above.

The details are all below, but first, be sure to sign up for PricePlow’s STORM news alerts, we expect a lot more from the top brand to watch this year: 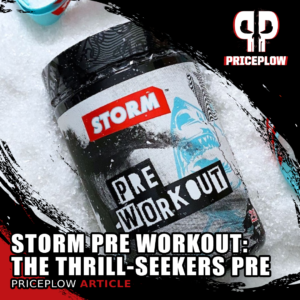 You bring the adrenaline, STORM brings the extra energy, focus, and bloodflow!

STORM BURN definitely disrupts the norm in the powdered fat burner / “fat burning drinks” category. We’ve become quite accustomed to “Burn” supplements that literally burn the taste buds due to their spices inside. And while those ingredients are effective, they’re definitely not for everyone.

Unsurprisingly, STORM takes a different approach. They drill into a combination of ingredients that you definitely don’t want to be deficient in (choline, carnitine, chromium), and pop it with a very solid dose of caffeine with a touch of support from theobromine. Tyrosine and Neurofactor pull in even more focus-enhancing effects, and you’re left with an incredibly feel-good weight loss support supplement.

As mentioned above in the caffeine section, this one’s not to be combined with STORM Pre Workout, but we wouldn’t be against a scoop (maybe two) of STORM Focus on the other end of the day. If you’re looking to support the burn without tasting the burn, check out STORM BURN.